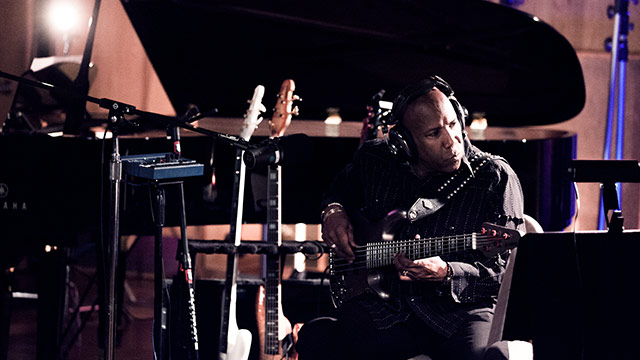 Through his decades of work with the likes of Eric Clapton, Phil Collins, Whitney Houston, Kenny Loggins and Daft Punk, Nathan East has established himself as one of popular music's most in-demand bassists. And beyond his sideman roles, his own band, Fourplay, has gone on to great success for over 25 years, and his 2014 self-titled solo debut earned a Grammy nomination for Best Contemporary Instrumental Album.

Somehow in the midst of his hectic studio and touring schedule, East managed to create his second album, Reverence. It features collaborations with names from his past, like a recently-unearthed, 25-year-old track with Clapton and Collins--back when Collins could still play drums--covering Earth, Wind & Fire, as well as East's first proper performance with fusion icon Chick Corea, which ended up earning East yet another touring gig.

Stream Reverence below, and read on for a discussion with East about maintaining his musical relationships, if he was scared of going shirtless on the album cover, and how tricky it is to cover iconic songs.

Reverence is due out on January 20 and can be preordered here.

AllMusic: There are musicians on the album, like Philip Bailey, Greg Phillinganes and Paul Jackson, Jr., who you've collaborated with for several decades. It must be gratifying to have been able to maintain these relationships for so long.

Nathan East: Relationships are the key to life, and for me, that’s been as important as anything else in putting together a successful career. I always maintain that I could go back to my first gig at the Cargo Bar in San Diego, I just like to try to keep relationships intact, and at the same time, a lot of the people I’ve worked with have become very dear friends over the years and decades, so it’s nice to be able to pick up the phone and call your friend and say, “What are you doing next Tuesday, can you come by the studio?”

AllMusic: Did you realize that from the start of your career or did it come later?

East: That’s something that I’ve always held high in my list of priorities, especially in music, it’s a people business, whether it’s a club owner or the manager of an arena, A to Z, that’s one of the most important aspects of being able to deal with people.

AllMusic: How did you end up choosing multiple Earth, Wind & Fire songs for the album?

AllMusic: Some of the songs you chose are especially iconic, like "Over the Rainbow" and "Higher Ground." Is there extra pressure when taking on these songs that people have heard a million times, knowing that you have to make it worth their while to hear again?

East: Absolutely. Reimagining a song is hard, and it’s challenging, because you don’t want to do exactly what they did originally, but for me, it’s fun to get in there and work up something with a few surprises, and you don’t want to go so far away from it that people don’t recognize it, but it is nice to do those. In “Love’s Holiday,” I managed to get quotes from three or four Earth, Wind and Fire songs. Having the background of loving their music and being able to insert these little messages, for me, it’s a lot of fun.

AllMusic: Was it obvious that for "Higher Ground," you'd perform the vocal line on the bass?

East: That was pretty obvious to use the bass as a voice for that. I often like to combine my own voice with the bass, whether it’s a little scatting or incorporating little hooks in the song, vocal hooks, so it takes the instrumental music into an area that I think more people understand, who don’t understand just instrumental music.

AllMusic: Your son plays piano on "Over the Rainbow." What was that ride to the studio like?

East: We drove together, and obviously, the preparation was key, we had worked a lot at home. Driving to the studio was just exciting, and it was fun to be chauffeuring a featured artist who was going to be on my record. He came in and completely nailed it, I think most of what we used was the first take. He was surprisingly cool and relaxed, it’s like you get both sides, you get the anticipation and excitement, but he’s a cool 16-year-old. He’s a lot of fun, we recently played it when I was out with Fourplay in Japan, and he sat in with us, and he came in and nailed it.

AllMusic: Was "Shadow" your first time working with Chick Corea?

East: We worked 35 years ago on the Hubert Laws Family album, on “Ravel’s Bolero,” but we weren’t actually in the studio at the same time. This was kind of our first time working together since then.

AllMusic: He's one of the defining names when it comes to jazz fusion. Were you on board with fusion right away when you first heard it or did you have to warm up to it?

East: I was right on board, because those records with Stanley Clarke and Lenny White, like Where Have I Known You Before, all of those records, I was way into.

AllMusic: Phil Collins doesn't play drums anymore, but you do have a performance from him on the record.

East: These days, he’s not playing much, so we resurrected a track from 25 years ago that my brother Marcel and I were working on when we were trying to form a little group, so we flew to England and recorded Phil and Eric on this version of “Serpentine Fire” that we were doing, so when I went to go do the album this time, it surfaced, and it was great to rediscover something we’d done a quarter of a century ago. The drums and guitar and horns are from back then--it was the Vine Street Horns, who Phil used to use--and then we said, “OK, let’s add Earth, Wind & Fire,” and we called Philip and Verdine [White] and Ralph Johnson in.

AllMusic: You've played bass with Phil for decades, how involved are you in his future plans?

East: When he came out of retirement, we did the U.S. Open opening ceremonies, for the opening of the Arthur Ashe stadium. We did “In the Air Tonight” and “Easy Lover,” so it’s fun to have him back. It’s ongoing, I share bass duties with Leland Sklar, and he and I also are back and forth in Toto, as well, so it just depends on availability. And I know I’ll be joining Eric Clapton on his dates that he has. And Chick Corea’s asked me to come in and play with his electric band for a couple of dates, as well, overseas, so I’m excited to be subbing in for John Patitucci.

AllMusic: Whose decision was it to go shirtless on the album cover?

East: That was Chris Gero’s call, he’s my co-producer and label head. On one of my trips to Nashville, he said, “We’re going to do the photo shoot here, too,” so my daughter took me out to the mall and we got a few bags of clothes, and I came to the studio with two bags over my shoulder, and he says, “I have an idea for a shirtless shot,” so I said, “Really? But I got all these clothes!” I went along with it, and it ended up being the cover.

AllMusic: Did that take some coaxing?

East: It took some coaxing. I do yoga a few times a week, so I try to stay in some kind of shape, but at the same time, I had to check with my wife and kids, and they signed off on it.

AllMusic: We've talked before about your experiences performing at the White House. Would you perform at the Trump White House if they called?

East: The honor for the highest gig in the land is always there, so every time the call comes, you check your availability. Obviously, this time around has been somewhat controversial, with the way people feel about what he represents. I’ve always said when you get that call, you have to do it, but as it stands, it looks like a lot of people are not doing it. As a guy who understands where people’s hearts are, I get it.