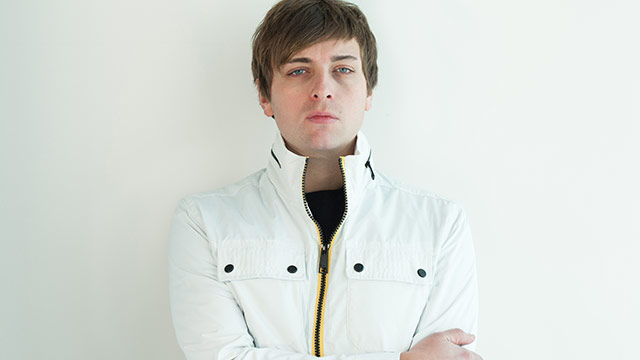 With Endorphin, Massachusetts-based synth-pop artist André Obin broadens his dark, propulsive sound by discovering a new apex of energy and incorporating ambient elements. Listen to our exclusive premiere of Endorphin and check out our chat with Obin, where we get into what his goals were with the new album, if he thinks his style would lend itself to film scores and his touchstone ambient albums.

AllMusic: How obvious of a choice was the title?

André Obin: It came from the lead track, and it was based on the rush I got from the piano melody that started the whole track. I was in between rehearsals, and I was banging away on the keys while my bandmates were taking a break, and that was the impetus of the entire track, and I got chills from it, and I knew it was something that had a lot of energy.

AllMusic: How does it stand out to you from your previous work?

Obin: I hadn't done something with a sense of that sort of euphoria or elation. Some of my previous tracks have been euphoric, but the feeling I got from it was kind of a peak level sort of energy that I’d never felt before.

AllMusic: Did you go in knowing that you were going to try new things and take some risks?

Obin: I think this is my most experimental record to date, and when I was making it, I knew I wanted to take chances and do a couple of things I’d never done before. There’s a track on it called “Nibo Moon” that’s completely ambient, it’s the first track in five years that I've released that is completely beat-less and instrumental, and it’s a mood piece that might not be able to stand on its own, but within the context of the record, I feel it’s really important to give the album flow. Everything’s there for a reason.

AllMusic: Were you always a fan of beat-less, ambient music?

Obin: I’m a huge fan of ambient music, some of the records that were really important to me in my formative period as a music listener were Aphex Twin’s Selected Ambient Works, Vol. 2 and Brian Eno’s Music For Airports and On Land, and I’m a really big fan of classic Warp releases, like the ambient tracks from Autechre and Boards of Canada always really moved me.

AllMusic: Do you have to be in a specific mood to enjoy it?

Obin: I can put it on just about whenever. It puts most people to sleep, but for me, I feel like ambient music has helped me focus and helped me define what was going around in my mind. I think it really became sort of a lifeline to me as music after a clubbing experience, if I was out listening to a techno artist at a club, even a big rock show or big punk show, sometimes it’s nice to come home to your apartment and put something on that’s a bit soothing, for both your ears and your psyche, something not so much to bring you down but like a cleansing.

AllMusic: Do you think your sound would lend itself to film scores?

Obin: I think if the right soundtrack presented itself, I’d jump on it. I’m a huge fan of sci-fi films, and I’m always listening to soundtracks. If you've seen Under the Skin, that soundtrack is imperative to that film, and I think it’s very powerful, the marriage between visual imagery and musical soundtracks, so if the right opportunity presented itself, I would. I've gotten a lot of different offers recently, from acting to production work, and there are things I’m probably going to end up turning down because I don’t want to confuse my fans and I don’t want to stray from the trajectory I've created for myself.

Endorphin is out on May 5 via Sky Council Recordings and can be pre-ordered via iTunes.