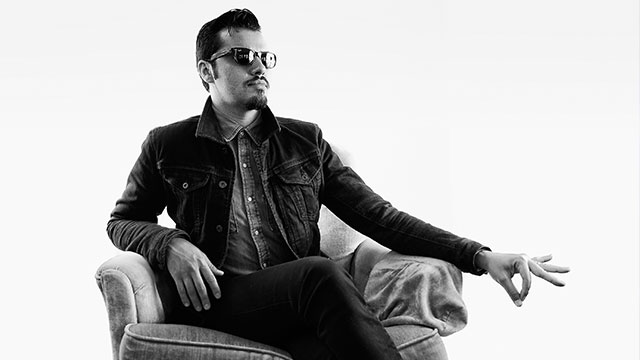 Aaron Behrens put his band, the eclectic, adventurous Ghostland Observatory, on hiatus last year, but he's not taking any time off from music. His new project, Aaron Behrens and the Midnight Stroll, is releasing its debut EP on September 16, and we have the exclusive premiere of the closing track, "Through Time." We also called up Behrens to talk about his Texas accent, where the Midnight Stroll name came from, and how he intends for the band's new tour, which starts tonight in Houston, to be the opposite of what Ghostland did onstage.

AllMusic: What can you remember about putting together "Through Time"?

Aaron Behrens: I can remember sitting up at the Skeleton Farm studios in my space up north, and it’s just me in the room, just an acoustic guitar, sitting on the floor, and I remember thinking about it as it was coming out, as the words were pouring out, just recognizing time, how everything fades away, how everything goes, and it was a real haunting moment, life-affirming, just realizing what life is. You can’t stop it, time is an entity in itself and it just keeps going, it doesn't wait for you. Sometimes it feels like it doesn't even care for you, it’s just going. You’re a blip on the screen, and before you know it, you’re gone.

AllMusic: Do you find that more scary or comforting?

AllMusic: We're both from Texas, and there are a lot of stereotypes that people apply to Texans. Do you still run into those on the road?

Behrens: I’m proud of my twang. I was born in a very small town called San Saba, Texas, and every time I talk, people say, “What kind of backwoods place are you from, what is that, Australian?” It’s just funny. Sometimes people tend to take your twang as a lack of knowledge, which is a nice way to say it, but I own it, and I own it even more if I find that the other person isn't from Texas. I lay the drawl on even thicker, because I’m proud of where I’m from. One time I was on tour in Norway or something and somebody was like, “Oh, Texas, do you all still have horses and ride them around town, and tumbleweeds?” I said, “Jesus Christ, what year is it, do you still think that people in Texas do that in the cities?” It’s crazy. You want to say, “Where’s your head at, you really think that’s the way it still is?”

AllMusic: You have a pretty strong accent as we're talking now, but I don't really notice it in the music.

Behrens: When I want to lay it down, you can hear it, but I can choose to put it on if I want to, or not to put it on if I don’t want to. That’s kind of a thing for me, my regular speaking voice has a twang, but when I sing, I take on more of a character. I like to sing from characters, not that I've created the character, but I am a different character, there’s me projecting a different person. Like I said, each song has an atmosphere, and within that atmosphere, there’s going to be a character in there, there’s going to be a part of me projecting out of that atmosphere. In Ghostland, I didn't put on any twang unless I really wanted to be obnoxious or something.

AllMusic: When you stepped away from Ghostland and made your own music, did you always know you were going to release it under your own name?

Behrens: I've always wanted to do a solo thing, I write so much, I write all the time, I’m writing every day. With Ghostland, it was a combined effort with Thomas and I, that’s the way it is, him and I get in a room together and we write. With this, it’s all songs that I've sat around with an acoustic guitar in various places around the country and wrote from the ground up, just me. I had all these acoustic tunes, and I thought, “It would be cool to have a band with me,” and so I've always wanted to establish my own entity, I want people to know I’m more than just Ghostland, I can do more than that. These songs needed to get out, they needed to shine through.

AllMusic: Did you have a lot of ideas for the rest of the band name or was it always "and the Midnight Stroll"?

Behrens: During the time when I was writing a lot of these tunes, I was in a state of panic, because I knew I had to take a break from Ghostland, but I didn't know what I was going to do. I spent a lot of nights just walking at my farm at nighttime, in the moonlight, staring up at the moon and talking to myself for hours on end at night, trying to console myself and feel right about things, and it just came to me, the Midnight Stroll. I’m out here in the middle of the night with that Patsy Cline type vibe, [sings] “I go walking after midnight…” So you have that haunting thing, and I love haunting, I love spookiness, I love the air of darkness and unknown, and I think it kind of creates that element. “This is Aaron Behrens and these are the things he’s going through,” the Midnight Stroll was sort of that dark night of the soul.

AllMusic: Your tour launches today. Are you going to be playing all new material or will you dig up any old songs?

Behrens: It’s going to be songs off of the EP and songs that are unreleased. I’m kind of doing it exactly the opposite from Ghostland; not a lot of lighting, just meat and potatoes and letting me get out there and sweat my ass off and perform without any smoke and mirrors. I just want it to be raw. We’re playing some great small clubs, and I haven’t been in these rooms in a long time, so I’m excited to get sweaty and in it up close and personal.

The self-titled EP from Aaron Behrens and the Midnight Stroll will be released on September 16. Pre-orders are available here.