The three albums in this European Sony Jazz box set were all recorded for and originally released on CTI in the early '70s. Prelude, with its breakout hit version of "Also Sprach Zarathustra (Theme from 2001: A Space Odyssey)," was cut in 1972, Deodato 2 in 1973, and In Concert (also credited to Airto, who was on the same bill and was also on the CTI label) in 1974. The three discs included here all reflect the remastered CD versions -- not the original LPs. Therefore, 2 includes the bonus cover version of Steely Dan's "Do It Again" and the In Concert disc is the expanded version, which includes only Deodato tracks and not Airto's as the LP did (the label should have changed the cover for the compact disc). It's difficult to tell who this is marketed toward, since Deodato fans no doubt have all of these CDs already. The music is a set of diminishing returns. While the first and second discs are excellent for the most part, the In Concert disc is almost a total throwaway. 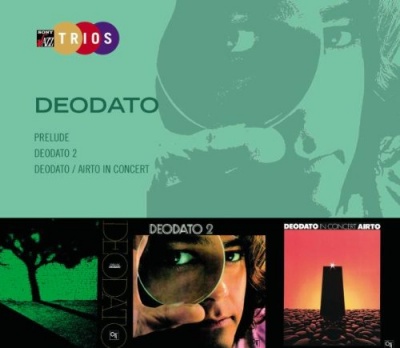