Prior to Prelude, Eumir Deodato was primarily known as a tasteful, lyrical, bossa nova and samba-based sometime arranger for Antonio Carlos Jobim, Frank Sinatra, Wes Montgomery, and others. Enter Creed Taylor, who gave Deodato a chance to step out on his own as a pianist/leader, doing a few tunes of his own plus a healthy quota of CTI-patented jazz interpretations of classical pieces by Richard Strauss ("Also Sprach Zarathustra (2001)"), Debussy ("Prelude to the Afternoon of a Faun"), and bowdlerized Borodin ("Baubles, Bangles and Beads"). Well, "2001" -- a clever, up-tempo Latin-groove takeoff on the opening measures of Strauss' tone poem suddenly exploded and became an improbable hit single. In its wake, Prelude soared to number three on the pop LP charts, and Deodato was propelled out of the arranger-for-hire business. Though overshadowed by "2001," the other tracks also hold up well today, being mostly medium-tempo, sometimes lushly orchestrated, conga-accented affairs that provide velvety showcases for Deodato's lyrical electric piano solos. The record also made a temporary star out of John Tropea, whose electric guitar has a lot of rock & rolling zip and fire, and Hubert Laws, Stanley Clarke, and Marvin Stamm each get a little solo room too. This would be the biggest hit Deodato and CTI ever had, and though short on playing time (32 minutes), it still makes enjoyable listening. 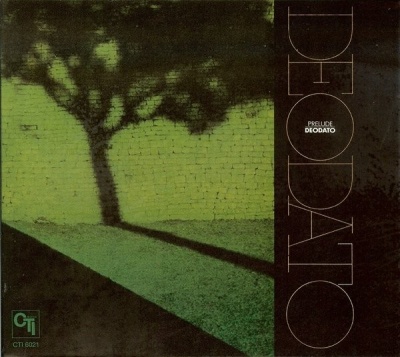