Recorded live in the Felt Forum of New York City's Madison Square Garden in the wake of Deodato's massive 2001: A Space Odyssey hit, this album has a fairly confusing history. Only three selections, "Do It Again," "Spirit of Summer," and "Tropea" were released on the original slapped-together LP In Concert, and these were combined with Airto Moreira's "Parana" and "Branches," which were recorded at the same concert. In the CD-era, the LP was split up; Deodato's tracks were combined with four unreleased tunes from the concert, giving the CD-buyer 35 more minutes of music, while the two Airto tracks were placed on The Best of Airto. The concert wasn't too eventful from the Deodato fan's point of view; his combo competently grooves on, John Tropea provides a tough rock edge, the brass section sounds overloaded and unintegrated in a concert setting, and Bob James adds unnecessary string charts later. The additional CD tracks are reprises of "2001," "Baubles, Bangles and Beads," and "September 13" from Prelude and "Skyscrapers" from Deodato 2 -- which were probably considered too redundant for release in 1974. LP fans will enjoy the Airto tracks, for they are, frankly, more exotically original and invigorating than those of his fellow Brazilians. [CTI remastered the 1974 concert for CD.] 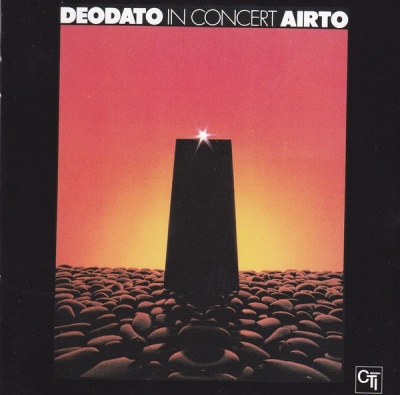