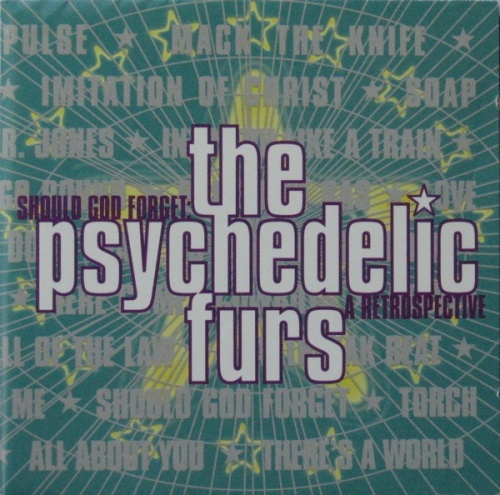 The Psychedelic Furs were the perfect lesson of why a great band should never turn to sh*t: it makes everyone forget they once meant a great deal. On CD one, it comes back, just like in 1980 when their first, self-titled LP arrived amid a storm of London raves (and smart singles), with such grinding, subversive-sounding, catchy rockers as "India," "Pulse," and "We Love You." They helped lead the burgeoning post-punk vanguard that had retained punk's primal urgency, but utilized unique, creative sounds and styles instead of punk's insistence on basic rock'n'blues chords. And there was Richard Butler kicking the stage under his kimono on that first, 1980 U.S. tour -- a blend, both aurally and visually, of master cynic Johnny Rotten (his voice was also as raspy and guttural) and the super-interesting Bowie (then of Low, Heroes, and Lodger). Wow! Second LP (Talk Talk Talk) killers such as "Into You Like a Train" and "Pretty in Pink" failed to diminish that fearsome rep, and even the prettier Todd Rundgren-produced third LP (Forever Now) still sounded fresh, as heard here with "Merry Go Round" and the lovely hit that broke them, "Love My Way." But with this taste of the top, the Furs lost their fire. They wanted to be pop stars, so they neutered their sound. The seduction of John Hughes movie mediocrity that simultaneously infected and ruined Simple Minds (likewise obliterating five great LPs) led them to a flavorless, danceable, weeny-pop wimp out. The first half of disc two, like those unforgivable if popular LPs they unleashed in the mid-'80s, falls so far, one feels the sting of betrayal. Unlike Simple Minds, the Furs became properly embarrassed over their loss of respect, leading them to two final, surprisingly good LPs that reclaimed a tougher sound, if not quite recapturing their older, caustic edge -- see the last half of disc two. But by then, no one but the teenyboppers they'd callously courted cared, the hits dried up, and the band capitulated. This double-dip CD further tosses up B-sides, rare tracks, and unreleased cuts to entice. But what still matters is the 1980-1982 stuff. Feel your skin freeze over: "'India'! You're my love song!" Buy the first two LPs, but Should God Forget is also a thorough reminder of fertility realized.