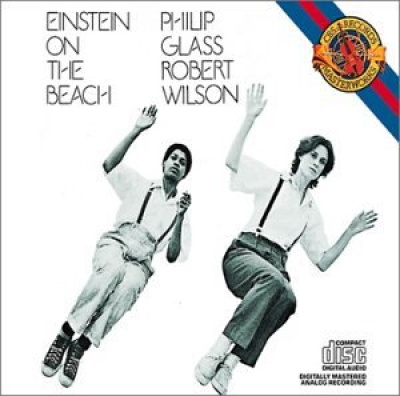 The recording of the original production of Philip Glass' and Robert Wilson's Einstein on the Beach has iconic significance both in the development of the musical style unfortunately known as minimalism, as well as in the history of music in the late twentieth century. It was a watershed moment when Glass and his ensemble brought the nearly five-hour opera to the Metropolitan Opera House in 1976; his unique aesthetic convictions moved from the rarefied atmosphere of loft concerts into the face of the classical music establishment in a way that could not be ignored.

One of the strengths of the work is the diversity of musical worlds it encompasses, from moments of a cappella choral singing, to relentless electro-techno tracks, to ensembles of sonically overwhelming grandeur. The most striking characteristic of Einstein is its use of repetitions, which are rarely exact -- a large part of the music's allure lies in Glass' subtle varying of the repeated patterns. The length of the patterned sections demands an extraordinary level of concentration from the performers, and listeners, regardless of their feelings about the music itself, cannot help being amazed at the virtuosity of the singers, speakers, and instrumentalists who could pull off such a remarkable feat of memory and endurance. For the listener willing to give him- or herself over to the music's spell, it can have a visceral, mesmerizing effect.

The recording features a number of memorable performances, not the least by the Philip Glass Ensemble, which plays with remarkable focus, precision, and energy, and the same can be said for the disciplined vocal ensemble. Violinist Paul Zukofsky negotiates the composer's patterns with deeply felt musicality and nuance, never with a sense of meaningless repetition. The actors, Lucinda Childs, Samuel M. Johnson, Paul Mann, and Sheryl Sutton, perform with a comparable verbal and dramatic virtuosity. The sound is clear, bright, and present. Einstein belongs in the collection of anyone concerned with the most significant developments in music of the twentieth century, and of opera in particular.