Listeners thinking that "Karolju" doesn't look like a word in any known language are right: composer Christopher Rouse, who wrote the texts for his own work, blithely explained to conductor David Zinman that the title was meant to suggest the idea of carols but that "he's always liked words ending in 'u.'" Motivation of a similar kind explains the work's texts as well, curiously titled "Latin," "Swedish," "French," "Spanish," and so on. The texts, Rouse said, "use words and phrases appropriate to the Christmas season, [but] they are not intelligibly translatable for long periods of time." The composer indicates that he followed this process because he composed the music first and faced the problem of finding texts to go with it, but the effect is the unpleasant creation of a simulation of the Christmas spirit rather than the thing itself. Rouse's non-settings are filled with signs of Christmas music like syllabic refrains, but it's somehow irritating to realize that signs are all they are. The composer combines the agile brass writing that is characteristic of his style with a light spirit appropriate to seasonal music. But even those predisposed to react positively to this generalized holiday festivity may not be satisfied with the other major performance on the album, that of Witold Lutoslawski's Polish Christmas Carols. This work clearly suggested the abstract dimensions of Lutoslawski's musical language, but it remains strongly connected to Bartók's rhythmic vigor. Unfortunately, vigor is in short supply in the singing of the Philharmonia Chorus. Zinman seems to be striving for a sort of sugarplum charm in this work but creates only a melodically aimless series of Christmas carols. Only mezzo-soprano Anna Stephany's performance of the final three-movement "Retablo de Navidad," a little-heard Christmas work by Joaquín Rodrigo, has much real sharpness in this holiday disc, which may serve as background music on the road to a holiday meal but offers thin fare when it comes to musical nourishment. 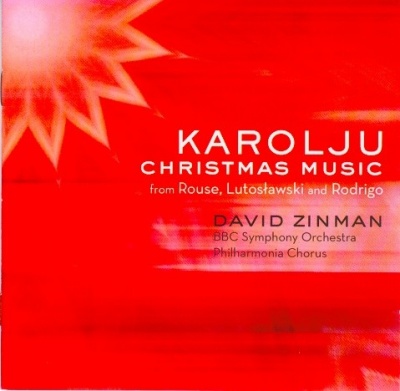