I Look to You Review

It's only been seven years between Just Whitney and 2009's I Look to You, not even Houston's longest time between albums, but it feels much, much longer, her glory days obscured in hazy memories of lost luster chiefly deriving from a bad marriage with Bobby Brown, chronicled in an embarrassing reality show for Bravo in 2004. I Look to You attempts to wash this all away with something of a return to roots -- a celebration of Houston's deep disco beginnings, tempered with a few skyscraping ballads designed to showcase her soaring voice. Houston's rocky decade isn't ignored, but it isn't explored, either: songs allude to Whitney's strength, her willpower as a survivor struggling through some unnamed struggle -- enough for listeners to fill in the blanks, either with their own experience or their imaginings of Houston's life. More than the songs, Whitney's voice tells the tale of her lost decade. The highs are diminished, the sweetness sanded away, leaving her a thick, knotty powerful growl that has an emotional pull not quite like a ravaged latter-day Billie Holiday, but not all that far removed, either; at the very least, Whitney can still sing, knowing when to wring emotion out of a phrase, knowing when not to push for the glory notes that she can no longer hit. This diminished skill set actually serves the showboating showstoppers well, turning them into something that operates on a human scale, injecting them with something approximating warmth, something that the songs quite deliberately avoid. Also, there just aren't that many of them on I Look to You, either. Most of the album splits the difference between burnished neo-disco and modern soul, aware of fashion but not pandering to them. Which isn't to say that these songs are necessarily age-appropriate, either: they're suspended in time and fashion, tinged with nostalgia but not quite taking into account that Houston isn't now (and never really was) a creature of the clubs. What she undoubtedly is, is a pro -- she sells these subdued glitzy productions, she makes boring songs interesting, she remains a forceful, tangible presence. With this admirable, if not quite successful, un-comeback out of the way, maybe she can pull away from the spotlight and settle into the serious business of finding songs to suit her new voice. 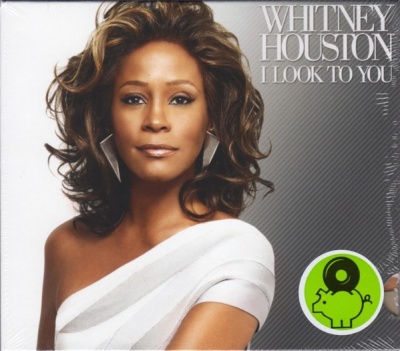 I Look to You Album Information