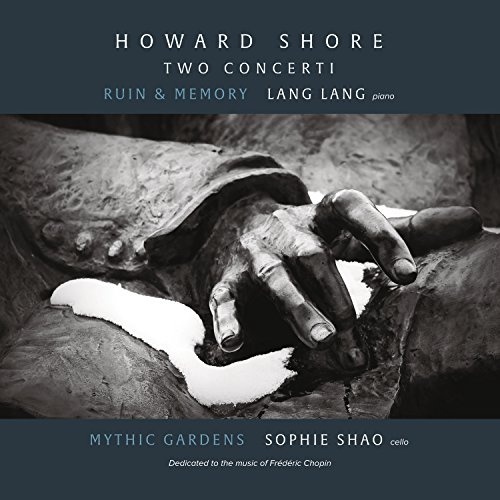 Marketing materials bill this Sony release as containing "two concerti in celebration of Chopin's music" by Howard Shore, best known for the soundtrack to The Lord of the Rings films. Actually, only the opening Ruin & Memory concerto for piano and orchestra, played by Lang Lang, had that aim; the cello concerto Mythic Gardens, performed by cellist Sophie Shao, was inspired by Italian gardens, but is provided as a companion work to the piano concerto. Both works are successful, the cello concerto perhaps even a trifle more so. Shore's tonal world is that of Chopin, but Chopin never wrote music like this. Chopin's piano concertos were early works, structurally (although not melodically) rudimentary. Shore's treatment of the orchestra is that of a film composer, and that collides in interesting ways with the concerto concept: the solo instruments rarely take the stage alone, but are backed by shifting groups of instruments that create quite subtle shades (and the performers are ably backed by Sony's engineers here, working some time apart, in two entirely different venues). Sample the first movement of the Mythic Gardens concerto, where the cello's role is more like Berlioz than Chopin, walking through Italian garden paths with lots more going on. If it's neo-Chopin you're after, the slow movements do evoke him, but again with novel structural twists. Lang Lang, backed by the China Philharmonic Orchestra under Long Yu, delivers the dashing sweep that has made him a star, but an even stronger impression is left by Shao, with the 21st Century Chamber Orchestra under Ludwig Wicki; she is a passionate player who takes command of a difficult score. It may be that appealing to the growing Chinese audience is part of the agenda here, but this is superior "crossover" music for anyone, the kind that doesn't betray the structural rigor that has historically defined music in the classical tradition.