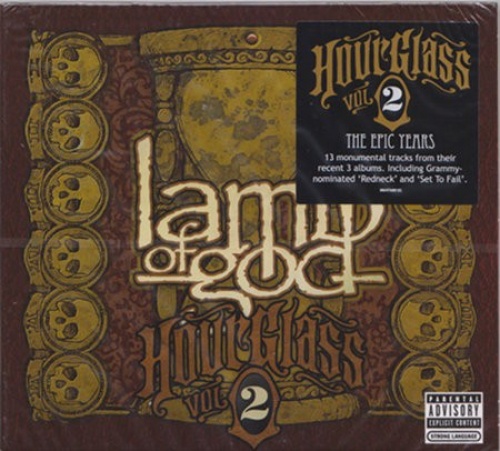 Opening the second volume in Lamb of God's three-disc Hourglass Anthology is the cut "The Passing" from 2009's Wrath, which reveals, in terms of production, arrangement, and musicality, how far this quintet traveled in 11 years without totally losing their hard-won identity. Entitled The Epic Years (which can be purchased separately, as can the other two volumes in the set), these 13 cuts document the six years -- and four albums -- of the band's breakout as a major charting and touring ensemble capable of headlining not only tours but festivals and most importantly for Epic, selling records. The band's sound has changed profoundly from the primitivism of their 1998 debut, Burn the Priest, and even from As the Palaces Burn, issued in 2003. Ashes of the Wake arrived in 2004, and along with a couple of other acts, peeled the horrid rap-metal nonsense dominating the airwaves away; and in the process made radio sound like something really dangerous again -- for a time. Produced by Machine, Ashes of the Wake and its 2006 follow-up, Sacrament, were focused, tight, powerful, and razor-sharp in detail. Thrash may have been fading from Lamb of God's forefront musically, but its brand of death metal was refreshingly free of classic metal tropes as well. Check cuts such as "Hourglass" from Ashes, or "Blacken the Cursed Sun" from Sacrament as two stellar statements of the band's menacingly illustrative death metal formalism (both albums are represented by multiple selections). Vocalist Randy Blythe comes across not as some mere guttural growler or over emotive screams, but as the authoritative, cutting-edge of the band's sonic storm. Compositionally, the music from these two albums is molten, over-the-edge metal. The tracks from Wrath -- produced by Josh Wilbur -- such as "The Dead Seeds" offer further evidence of Lamb of God's musically restless development and their further mastery of recording studio technology to further their own ends. Hardcore fans will argue forever over track selection, but what is here presents this quintet at their commercial and aesthetic peak. Period.