Since Oasis has an instantly identifiable, seemingly simple signature sound -- gigantic, lumbering, melodic, and inevitable, as if their songs have always existed and always will -- it can be hard to pinpoint what separates a great Oasis song from a merely mediocre tune. It could be anything from overblown production to a diminished swagger, or it could be a self-satisfied laziness in the songwriting, or a panicky attempt to update their defiantly classicist pop with an electronic shine. All of these problems plagued the group's records since their blockbuster 1995 blockbuster second album, (What's the Story) Morning Glory?, and while none of the three albums that followed were outright bad, by 2002's Heathen Chemistry it seemed that even Noel and Liam Gallagher had lost sight of what made Oasis great. While that record had its moments, it often seemed generic, suggesting that the group had painted itself into a corner, not knowing where to go next. Surely, all the reports from the recording of their long-gestating sixth album suggested a faint air of desperation. First, the electronica duo Death in Vegas was brought in as producers, bringing to mind the band's awkward attempts at electronica fusion on Be Here Now and Standing on the Shoulder of Giants, but those recordings were scrapped, and then their second drummer, Alan White, left only to be replaced by Zak Starkey, the son of Ringo Starr, suggesting that the Gallaghers were coming perilously close to being swallowed by their perennial Beatles fixation.

All of which makes the resulting album, Don't Believe the Truth, a real shock. It's confident, muscular, uncluttered, tight, and tuneful in a way Oasis haven't been since Morning Glory. It doesn't feel labored nor does it sound as if they're deliberately trying to recreate past glories. Instead, it sounds like they've remembered what they love about rock & roll and why they make music. They sound reinvigorated, which is perhaps appropriate, because Don't Believe the Truth finds Oasis to be quite a different band than it was a decade ago. Surely, Noel is still the first among equals, writing the majority of the songs here and providing the musical direction that the rest follow, but his brother Liam, bassist Andy Bell, and guitarist Gem Archer are now full and equal partners, and the band is the better for it. Where Noel struggled to fill the post-Morning Glory albums with passable album tracks (having squandered his backlog of great songs on B-sides), he's now happy to have Bell and Archer write Noel soundalikes that are sturdier than the filler he's created over the last five years. These likeable tunes are given soul and fire by Liam, who not only reclaims his crown as the best singer in rock on this album, but comes into his own as a songwriter. He had written good songs before, but here he holds his own with his brother, writing lively, hooky, memorable songs with "Love Like a Bomb," "The Meaning of Soul," and "Guess God Thinks I'm Abel," which are as good as anything Noel has written for the album. Which is not an aspersion on Noel, who has a set of five songs that cut for cut are his strongest and liveliest in years. Whether it's the insistent stomp of "Mucky Fingers" or the Kinks-styled romp of "The Importance of Being Idle," these songs are so good it makes sense that Noel has kept them for himself, singing four of the five tunes himself (including the soaring closing duet "Let There Be Love," the brothers' best joint vocal since "Acquiesce"). But the key to this new incarnation of Oasis is that this move by Noel doesn't seem like he's hoarding his best numbers, or a way to instigate sibling rivalry with Liam. Instead, it emphasizes that Oasis is now a genuine band, a group of personalities that form together to form one gang of charming rogues. Apart from the tremendous, rambling "Lyla" that channels the spirit of the Faces and the occasional ramshackle echo of Beggars Banquet, there's not much musically different here than other Oasis albums -- it's still a blend of British Invasion, the Jam, and the Smiths, all turned to 11 -- but their stubborn fondness of classic British guitar pop is one of the things that makes Oasis great and lovable. And, of course, it's also what makes it hard to discern exactly what separates good from great Oasis, but all the little details here, from the consistent songwriting to the loose, comfortable arrangements and the return of their trademark bravado makes Don't Believe the Truth the closest Oasis has been to great since the summer of Britpop, when they were the biggest and best band in the world. 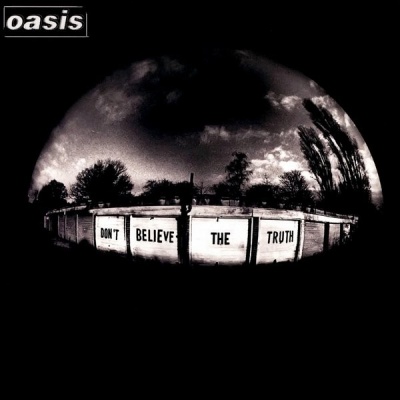