The Gallagher brothers' boundless, boorish, boasting bluster and blather only felt like brazen British working class moxie as long as they made great records that backed up their obnoxious arrogance. So when the songwriting fell off the last six years, on the bloated Be Here Now and Standing on the Shoulder of Giants, it was like watching helium hiss out of an overstuffed blimp. After all the bellicose babble, and the posturing prattle, Oasis's U.S. sales plummeted like the Hindenberg over Lakehurst. The pompous Wizard has been exposed and humbled, bringing joy to thousands of Totos tugging on Oasis's huffy pantleg, glad to see such massive egos get stuffed like smelly socks back up their big mouths. So leave it to Oasis to resort to the biggest, emptiest rock gesture of all: the huge-stadium live LP! Their popularity remains unchanged in home England, which still worships the group uncritically like the equally-diminished, figurehead Royal Family. So the brothers give us this document of Wembly stadium and its Canyonesque acoustics, with its cheering, singing throngs of 70,000 people. Just contemplating the 98-minute, double CD Familiar to Millions, you think, "They don't get it, do they?" So how come the group were actually able to pull this off, instead of dropping an overbearing embarrassment on us? It's because Oasis always deliver their material with conviction live, with the music as the focus in lieu of some bogus floor-show. And because they play a best-of set, going all the way back to their initial singles "Supersonic" and "Shakermaker," and such enduring tunes as "Acquiesce," "Roll With It," and "Live Forever," Familiar is a reminder of the substance they retain, even as they doggy-paddle along, stuck for bearings. Strong Noel-sung covers of Neil Young's "Hey Hey, My My" and The Beatles' "Helter Skelter" are also delivered in their hard-working, serve-the-song demeanor-this is no ghastly Rattle and Hum trip. Most of all, the band plays well. New key member Andy Bell, late of early-'90s fantastic favorites Ride (let's forget Hurricane #1) is twice the bassist Paul McGuigan was, so the loss of three-fifths of the original lineup has actually tightened them up. The band's strengths-Noel's hooks and Liam's strong, gruff, accented vocals-come to the fore, while the weaknesses-inferior material-are weeded out like it they were never written. Hell, only five of these 18 songs are post-1995, one of which, "Gas Panic!" (which sounds like it's sung by Bell, hurrah!), sounds vintage. It still would have been better to record at a rock theater or hall. This sounds a tad hollow, even though the guitars are so meaty-rare for a stadium tape. But if Oasis has been staggered here by a punch they invited (we'll see if they get off the canvas or not, as the siblings keep snipping at each other), Familiar shows they went down fighting as a touring live band. And with the mainstream rock scene as dire as it is now, we could still use them. 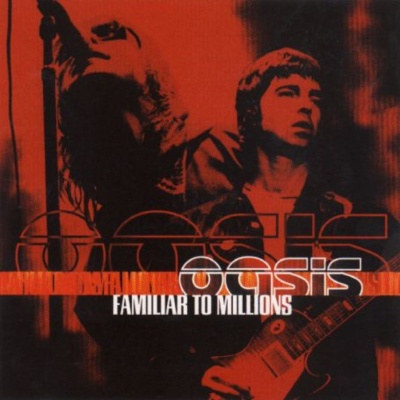