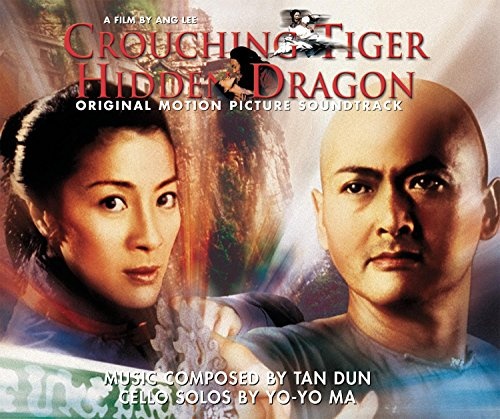 First released in East Asia in the spring of 2000, acclaimed director Ang Lee's Crouching Tiger Hidden Dragon, a high-class film tribute to the wu sha, or magical sword fighter, genre of martial arts film, became an international hit, even where shown in Mandarin with subtitles.

The film was scored by Tan Dun, a Chinese-born composer who lived in the United States and is learned in Western and Chinese music. A significant part of the film takes place in the Western Chinese desert regions, where Tan was sent to work as a boy during the Cultural Revolution and learned the local music, which also finds its way into the score.

Tan Dun used highly diverse and complex forces in making this recording, including the Shanghai Symphony Orchestra (Western instruments), the Shanghai National Orchestra (ethnic Chinese instruments), and the Shanghai Percussion Ensemble. The prominent cello part is played by international star Yo-Yo Ma, who convincingly realizes the Chinese flavor written into this solo line, particularly in an enchanting duet with the ethnic Chinese violin, the erhu, played by Ma Xiao Hui. Tang Jun Qiao plays two instruments, called the bowu and dizi, Alimjan plays an ethnic instrument of West Chinese origin called the rawap, and the hand drum (another instrument from the region) is played by Kasim. Tan Dun and Jorge Calandrelli's A Love Before Time, the end titles tune, is sung by Hong Kong pop star CoCo Lee and presented, in full, in both English and Mandarin versions.

The performances are first rate and excellently recorded. The album makes good listening, though one can complain that cues are not played in their dramatic order, and that some of the most interesting ethnic-style cues from the film are cut out, whereas at fifty minutes the release could certainly have included them.