After eight years away from the microphones, Les Paul joined forces with country music's Chet Atkins in a marvelously relaxed, tasty session of cross-cultural jamming. The sound of the backup band may be Nashville country, but the tunes, mostly drawn from Paul's repertoire, are jazz and pop standards ("Caravan," "It's Been a Long, Long Time," "Avalon," etc.). Both players improvise, duel and converse with the spontaneity of jazz always in the air -- and unlike almost all of Les' recordings since 1947, there is no overdubbing except on "Caravan" and "Lover, Come Back to Me." You won't have any problem telling Chester and Lester apart on these tracks; Les' bright, almost metallic sound and twirling, yet now more economical flurries are a world away from Chet's mellow fingerpicking, lightly tarted with echo. Yet the two styles play brilliantly off each other; one potent example occurs as Chet superimposes the theme from "Picnic" from his repertoire over Les' statement of "Moonglow." A lot of the between-takes session chatter is intentionally left in, with Les's hotfoot voice trading quips with Chet's Tennessee drawl. On "Avalon," heard in two consecutive takes at different speeds, the dialogue is particularly funny, as Atkins mockingly tries to browbeat his old idol. This album (now on CD) had the effect of putting Les Paul well on the road toward canonization by young rock guitarslingers who noticed his name on Gibson instruments. 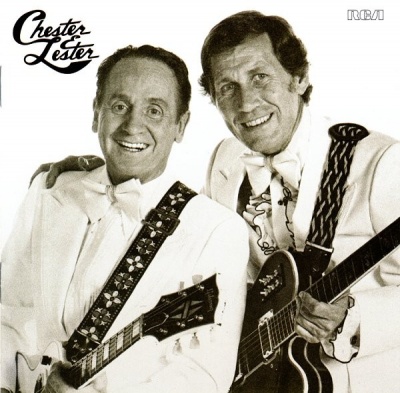