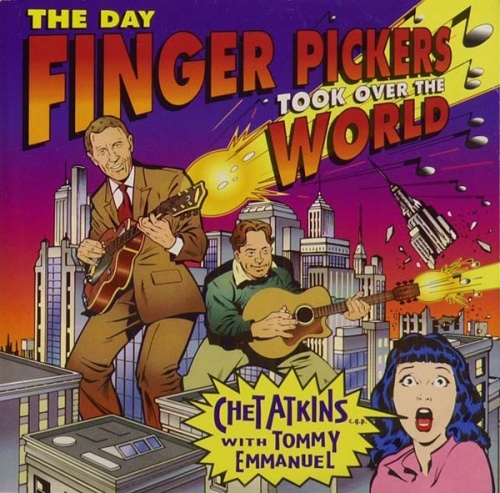 At 73, with hundreds of albums and countless sessions to his credit, Chet Atkins still had another great recording in him -- this splendid duo session with the young Australian guitarist/composer Tommy Emmanuel. Here, Atkins leaves all of the smooth jazz experiments from the previous decade and a half behind him, choosing superior material for their acoustic guitars, with the rhythm section laying down swinging country-pie tracks underneath. Emmanuel's fingerpicking style isn't quite as tied to the rhythm as Atkins'; it's a little sharper in attack, fleeter in technique and a bit flashier in temperament, yet remarkably well-matched to that of the east Tennessee master, almost an alter ego. Indeed Atkins' tune "Tip Toe Through the Bluegrass" plays the two styles off each other quite revealingly. Emmanuel turns out to be a top-notch tunesmith in his own right, too. His "Dixie McGuire," a disarmingly affectionate mid-tempo tune that won't let you go, inspires a performance that is one of the high points of Atkins' Columbia period -- or for that matter, equal to anything from his long RCA period, too, in sheer emotional effect. The title track, which Atkins adapted from a lyric that dealt with bass players (as opposed to fingerpickers), finds the two reciting and singing a mock-horror flick tale -- and "Ode to Mel Bay" good-naturedly mocks beginning string players everywhere. As a tribute to the visitor from Down Under, there is also a slyly countrified "Waltzing Matilda." This would be Atkins' last album of new material released during the 20th century -- leaving it, glory be, on a very high note.