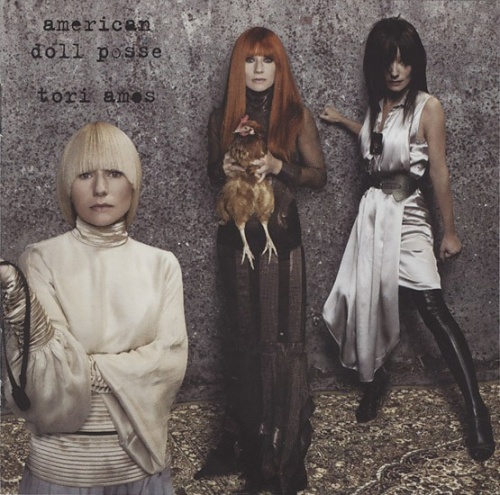 Nine albums in and Tori Amos is working harder than ever. American Doll Posse, with its great title, 23 tracks, and five archetypal personalities (all of whom resonate with feminine gods in the Greek and Roman pantheons) is an exercise in both excess and obsession. For starters, each of these personalities has her own blog. All of them have a distinct look. There's Pip with her streetwise standoff-ishness who sings about how her "Teenage Hustling" serves her in her adult life; she is also a very clever and intense "observer" (another important word for this record) of the political and surveillance situation in the U.S.; there's Clyde, a bit of a hippie who observes people and art from a perspective that is suspect of all male interpretations of the world (smart woman) and not the moment of encounter, but who that person is under the mask of it. Isabel is the glamorous photographer. If she exists anywhere but inside Amos, she is the fulfilled fantasy construct of both post-Freudian psychoanalyst Jacques Lacan and the father of Deconstruction theory Jacques Derrida. She watches the watcher watching. The surface reveals whatever is beneath it, and the layer underneath that. And then there's Santa -- not Claus necessarily -- but she looks closest for some perceived beauty (hers or her observational object's is the question) that is invisible to that person. She strips the moment away and gets right down to the task of discovering it: "Wait. Let's look closer.." Then of course, the voodoo priestess Amos herself appears in the center; she is politically pissed off and motivated ("Yo George," the first track on the set is a personal send-out to the leader of the free world in 2007 -- "I'm allergic to your policies") and a proud, aware, socially conscious mother and protector who cannot be fooled. "Big Wheel," the album's most rock & roll track, is an anthem that reveals her to be free of all bondage and a self-proclaimed "...M-I-L-F don't you forget..." This outrageously long song cycle reveals these characters as individual "voices." Amos credits each of the five in her liners and plays piano and Rhodes behind them.

Musically, American Doll Posse is no less ambitious, and all the better for it. Though 23 cuts can become a Tower of Babel in song, Amos has written some of the tightest, most cohesive and diverse songs of her career here. There's Amos singing "Big Wheel"; there are the squalling heavy metal guitars in "Teenage Hustling"; the pumping 4/4 bassline throb of Clyde's "Bouncing off Clouds," with its intricate melody and shimmering piano work and layered backing vocals; the seductive blues-rock swagger in Santa's "You Can Bring Your Dog" that transfers itself into a quirky faux-ragtime melody before it breaks itself wide open and splits these two soundworlds in half. It's a number that's so sick with desire it reduces its object to meat. The brief "Devils and Gods," sung by Isabel is a ballad that peels back the veil to reveal an essential truth with harmonically shimmering acoustic guitars and lithe piano. Pip and Santa reply in "Body and Soul" with its enormous sonic attack where all the instruments are turned up to ten and pack a wallop with a fuzzed-up Jon Evans' dirty bassline and staccato piano that promises salvation through ecstasy, not sermons or violence.

Some of the best songs here are near the end, in Clyde's gorgeous ballad "Roosterspur Bridge," where Amos' piano guides the singer and Mac Aladdin's guitars whisper behind until Matt Chamberlain's spare kit work gives the words an urgency despite the languid pace. "Almost Rosey" (Isabel) is one of the very best mid-tempo autobiographical rock songs Amos has ever written. Its sense of dynamic, slippery rhythms and change-ups keep a constant groove and the listener holding on for every word with the swirling piano and syncopated drum work: "I once tried to comply/with an authority that would/Subsidize my wild side/but at this altar was sacrificed..." Pip's "Velvet Revolution" is a Spanish flavored poetic piano and guitar ballad in a narrative fashion that reflects Cesar Vallejo and the manifestos of Isabel Allende and a young Vaclav Havel. "Dark Side of the Sun," sung by Isabel, is a an anti-war song with its wailing lead guitars and the singer letting the grainy side of her voice underscore the lyrics with conviction. Pip's apocalyptic "Smokey Joe" is an entire cinematic drama with atmospheric walls of electronic noise and washes of guitar that compete with the contrapuntal voices in call and response execution. The final track, "Dragon," sung by Santa, is knotty, complex and lilting in some places and aggressive in others; it feels like it belongs somewhere else, but that's where the beauty lies. It's the place where healing happens in the heart of the eternal feminine. And it rings solidly true.

In sum, these dress-up characters are, no matter Amos' ambitions, simply reflections of her often contradictory nature as both a conceptual artist and songwriter. She is playing dress-up and not copping to it. It's not so much that she doesn't pull it off, but these characters and their strange views of the world, femininity, and the ruinous masculine come down to two things: observation and perception, and neither are always what they seem. These have always been part of Amos' expressed aesthetic. Perhaps speaking these through the kaleidoscope of different personas made it easier to assemble such a vast collection of songs for one album, to exorcise the obsession or simply to give life to it through excess. Whatever the reason, American Doll Posse is exhaustive and exhausting, and contains some of the finest material Amos has offered on record. As a songwriter her reach is higher, and when she grasps the gown's tail of her Muse, her grasp is tighter, and sure. Her musical vision and production skills are almost astonishing in places. American Doll Posse is a work that has its problems due to its sprawling nature. And yet, it's perhaps because of that sprawl that it makes a real case for the overblown and indulgent in rock & roll again.