There are basically two ways to deal with a divorce in pop music: dig deep into your soul and pour it all out on the page (à la Blood on the Tracks), or treat it as sheer liberation (à la Back in the High Life). Perhaps it's only appropriate that the dissolution of the Jessica Simpson/Nick Lachey marriage -- one of the biggest tabloid stories of the 2000s, or at least 2006 -- produced two wildly different records that nevertheless follow these blueprints to a tee. First, Nick delivered the mopey What's Left of Me, whose title pretty much gives away the game; he paints himself as the man wronged, unaware that he's coming across a bit like a simpering cuckold but clearly aware that he's placing all the blame on Jessica's shoulders, and even if she doesn't explicitly embrace that burden on her post-divorce platter, A Public Affair -- whose title also nods at the hysterical gossip surrounding their separation -- its devil-may-care vibe suggests that everything that's been said about her is indeed true. At the very least, she's put her marriage far, far behind her -- according to the liner notes, some sister-bonding with Ashlee, where they cried and listened to Patty Griffin, did the trick (if only they were watching Kathy Griffin instead!) -- and is out to have nothing but a good time. And that's what A Public Affair is: a party record, pure and simple. A full eight songs are finished by the time Jessica switches the tempo down a notch or two, and even then it's only for a few songs; of the 13 songs here, ten are designed either for the dancefloor or carefree sunny afternoons. Of those three slower songs, there are a few allusions to her breakup with Nick -- on "I Don't Want to Care" she sings that she doesn't want to care about him and herself, and her version of Patty Griffin's "Let Him Fly" carries a certain meeting given the context -- but they don't stick, since they're overwhelmed by the bright, gaudy retro-dance that dominates this album.

In other words, it's the opposite of the turgid, moribund 2003 In This Skin, which was all mannered showbiz ballads, just like how 2001's Irresistible was the reverse of her overly calculated debut, but the difference is, A Public Affair is easily the strongest album she's ever made, powered by a couple of excellent singles in "A Public Affair" and "If You Were Mine." Respectively, they recycle Madonna's "Holiday" and Janet Jackson's "When I Think of You," but that's a good place for Jessica to be -- breezy and tuneful, sunny and cheerful, they're songs that retain their sugar buzz after they've been played a dozen times. When she tries too hard -- which she does a fair amount here: most horrendously on the stilted hip-hop of "Fired Up," which makes Britney's "Me Against the Music" seem graceful; most ridiculously on "Swing with Me," a reworking of Louis Prima's "Sing Sing Sing (With a Swing)" that just points out how good Christina Aguilera's similar big-band makeover on Back to Basics actually is; and most bizarrely on the attempted country-funk of "Push Your Tush," a disco workout built on the Ohio Players' "Who'd She Coo" but memorable for Jessica's incongruous Hee-Haw-isms, such as her opening salvo "let's get some grub!" or a tossed-off "cock-a-doodle-doo!" -- she falls flat on her face and it's pretty embarrassing to hear, but she and her producers have enough sense to keep things as light and airy as angel food cake. Since this has been an instinct that's failed Jessica and her team -- as always, headed by father and executive producer Joe Simpson -- it comes as a bit of a shock that a good portion of A Public Affair is indeed pure cheerful fun, since she's only hit that on occasion in the past. And if A Public Affair doesn't all work -- and even if her voice is suspiciously buried in the mix throughout -- it nevertheless is by far the most entertaining album she's ever done and does indeed suggest that the divorce has loosened and liberated her (of course, some might say she got a little looser and liberated toward the end of the marriage, and based on What's Left of Me, Nick Lachey would be one of them). 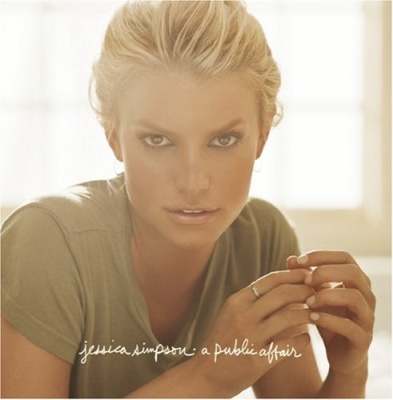