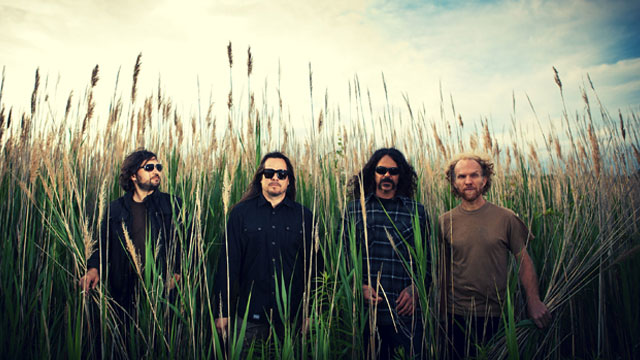 Vista Chino began as Kyuss Lives, featuring original Kyuss members John Garcia and Brant Bjork, alongside Mike Dean of Corrosion of Conformity on bass and newcomer Bruno Fevery on guitar. ​Then the lawyers came calling and now they're called Vista Chino, but the spirit of their original band's groove-based desert rock remains intact. It's been nearly a year since Vista Chino released their debut, Peace, and while the band is busy with other avenues at the moment—Garcia is releasing a solo LP this summer, Bjork is touring solo, and Dean has been recalled to C.O.C. to tour on their upcoming album—there's a new Vista Chino video for the track "Barcelonian," and we have the premiere. Press play and stick around for our interview with Vista Chino frontman John Garcia.

AllMusic: It's been about a year since you started performing as Vista Chino. How is the name fitting?

John Garcia: I like Vista Chino, I like the band. We could be called the Underwater Basket Weavers for all I care, and it wouldn't make a difference to me, it's all about the music and the void it fills for me. I love Vista Chino the band, when you're playing with Brant Bjork and Mike Dean and Bruno Fevery, those guys are well-schooled in their craft and they're great at it, so to be able to share the stage with those guys is fantastic. Vista Chino was a little bit of an enigma, we did this record, we toured the world, and now Mike is concentrating on C.O.C. and I'm concentrating on my solo thing and Brant is concentrating on his solo thing. There was never any breakup or any bad blood, it was just really me wanting to get this monkey off my back with my solo record. Vista Chino is part of home.

AllMusic: Even though it's an established musical entity, did a new name necessitate you to go through the growing pains of a new band?

JG: That's exactly what happened, if you want to call it growing pains of a new band, I'd use that verbiage. Any time you change a name, you're going to take a hit, and we certainly did, there's no question about it. But we've done all kinds, we've played in front of five people, 500, 5,000, and close to 50,000, and everywhere in between, so it's just part of the name change, and I've played in so many bands throughout my life, whether it be Kyuss or Slo Burn or Unida or Hermano or whoever it may be, I'm accustomed to that, so it's really no skin off my teeth.

AllMusic: When talking to the Dandy Warhols, they talked about admiring the ease of making lyric videos, which didn't exist back when Kyuss was making videos. Would the idea of not having to appear in your own videos appeal to you?

JG: I'd be a bit more hands-on, I think. I like to get my hands in there, I like to be involved in the biggest to the smallest way, depending on the capabilities of the director and how well-schooled they are. As far as doing those lyric videos, people tend to like that. When I saw that one for Cee Lo Green, the "Forget You" song, I had that on heavy rotation, I loved the lyrics so much and I loved reading them. I don't see myself doing that, but never say never.

AllMusic: Do you have a song or album that you think you've heard more than any other in your life?

JG: The record Walk Among Us by the Misfits is always there, also "She Sells Sanctuary," that song changed my life. I was searching for something, I knew I had music to listen to. When you're a young kid growing up, sometimes you have to share your bedroom with your brother or your older sister, and me being the youngest, I was being pawned off to either one of them, depending on who I bugged the most and how much they could put up with me, so in one bedroom was Earth, Wind and Fire, the Ohio Players and a lot of R&B, and on the flip side of the coin, when I stayed with my sister, she was listening to a lot of Pink Floyd, a lot of Tom Petty, even a lot of early Smiths stuff. But I never found my own until my freshman year of high school. I'd been introduced to punk, Suicidal Tendencies, but I was still searching, looking for something more, and a guy named Greg, a skater, was listening to the Cult's Love, he put it on in my photography class, and that changed my life, I knew I'd found my thing. This was what I was searching for. I always go back to that, and I constantly listen to the Cult. I'm a fan of Ian's, and I'm a fan of Glenn Danzig's, I'm a fan of Terence Trent D'arby, I'm a fan of Rufus Wainwright, I'm a fan of Frank Sinatra, I love singers who have feeling and emotion and passion. But Ian Astbury is a standout, it's almost a curse, it changed my life so much that my immediate plans from going into the military or going into veterinary school were completely and totally derailed because of this band called the Cult, because of this song called "She Sells Sanctuary," that's how much it meant to me. I feel sometimes it was a curse, but I'm just a fan.

AllMusic: Is there a particular track from Walk Among Us that you find yourself returning to?

JG: From "20 Eyes" to "Nike" to "Hatebreeders" to "Mommy," "Skulls…" I was listening to those when I was 15, 16 years old and spinning vinyl and going to Green Hell Records off Hollywood Boulevard and seeing a limited edition going for 350 bucks on green and I'd go, "Holy fuck, where am I going to get 350 bucks?" I had to buy the black vinyl, but that was fine, I didn't care, but what an all around great feeling, great emotion, just a great record. It's hard to pick one. I have to go with the opener, I think I have to go with "20 Eyes," it just knocks your teeth in.

Dandy Warhols Frontman Courtney Taylor-Taylor on the Timelessness of 'Thirte ...

Dandy Warhols Frontman Courtney Taylor-Taylor on the Timelessness of 'Thirte ...