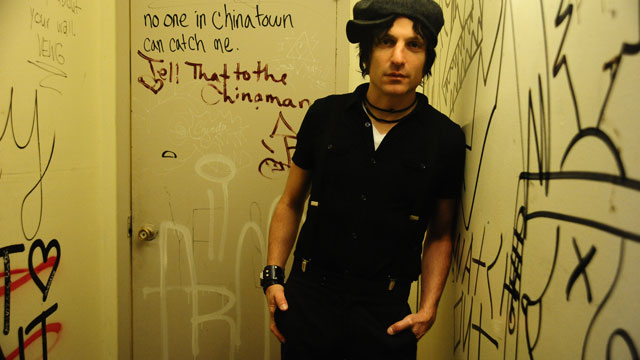 "Addicted" is the lead single from New York Before the War, the first new album in five years from New York musician Jesse Malin. Malin first made waves as frontman for the glam revival band D Generation and hardcore band Heart Attack, then evolved into a more singer/songwriter vein on his Ryan Adams-produced 2002 solo debut, The Fine Art of Self Destruction.

Look for New York Before the War on March 31, followed by Malin hitting the road in April. Check out the video below, plus some words from Malin on how the video came together.

"We shot this with our old friend Dave Stekert, who did the "Queen the Underworld" video from my first album, The Fine Art of Self Destruction. The song is about desperately trying to hold on to the moment in these rapidly changing, disposable times—finding a way to see the beauty in the sadness. A lot of us found a reason to exist because of music that spoke to us and said, "It's okay to be fucked up, you're not alone." When my neighbor and mentor Arturo Vega (the 5th Ramone) passed away it made me think back to the artists I looked up to as a kid and the songs that got me through.

We shot this video in black and white to show the romance of still believing in something amongst the decay. We filmed in one of the last dirty, old punk rock style rehearsal rooms, very similar to the ones I grew up playing in in the old hardcore days. We wanted to pay homage to a couple of our favorite films—the lonely bar scenes in Casablanca and the downtown noir of the early Jim Jarmusch classics like Stranger Than Paradise and Down By Law.

I met Sailor, a 7-year-old wonder, with his mom and dad by the merch table of the Count Basie Theater after a show. He was wearing one of those Once Upon a Time in America caps. He was perfect for the role."

Order the "Addicted" single on iTunes.