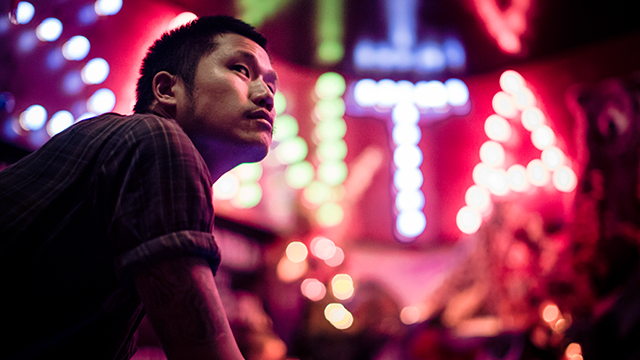 This week Alex Zhang Hungtai, the man behind the hypnotic lo-fi band Dirty Beaches, talks to us about some of his favorite things and places. Dirty Beaches release their album Drifters/Love Is the Devil this week, and the two discs reveal the growth the project has experienced since their fuzzed-out rockabilly beginnings. Hungtai delves deeper into film music, stretches the lengths and scope of songs, and generally evokes a wide range of moods with the music he creates. It’s well worth checking out the album in its entirety, but here’s a track to check out while you read Alex’s list:


Belgrade, Serbia
I've only been there once on tour, but the experience and impression was so strong that I have frequent dreams about it: the architecture; the residual impact from the war; food; amazing people.

Huang Shu by Chang Hong Liang
The headline of the book on the back reads (translation): "The inequality and problems we have as a society is not because some people are uncivilized, but because some civilized people behave more like animals." This book touches on subjects of guilt, self deprecating complexes for immigrants and people that are born into this post-colonial world, and how it’s still poisoning this generation. It’s quite radical and racist in some ways, so approach with caution. But what I find inspiring was not his critique on western cultural colonization but the self deprecating nature we find in so many developing countries from its people, and their inferior complexes. Really interesting topics that can fuel countless nights of heated discussions with your homies. Definitely subjects worth spending time thinking, and talking, about.

Berghain (Berlin)
I've never really listened to electronic music or was a part of rave or underground dance culture, but after moving to Berlin I had one of those nights where I danced until 2pm. There are countless stories and countless things that happen in Berghain. It can get dark quite easily in there, but if you’re not afraid of the dark, then it’s an inspiring place to be. Somewhere to get lost for the night, if you’re into that kind of thing.

Bar Mleczny Familijny (Warsaw)
Our friend Karol took us here for lunch, and I'm a big fan of Polish food. Whether I’m back in Montreal or NYC, I always stop by for some Flaczki, Hungarian pancakes, borscht, but this place pffft blew all that out of the water and I love it there so much. It’s essentially an old Communist era style canteen with prices that can't be beat for lower income citizens, or folks who miss the good old days, or youngsters like us who want to support this amazing community service and to keep it in business. It tastes like your babcia's cooking, no fancy shit, just good old home cooking style. It’s also got a sweet atmosphere hanging out with the babcias and dziadzios.

Russian night trains
I've taken the ones in China where it's separated into two categories: Soft seats (compartments with four bunk beds) or hard seats (literal), but some of the Russian ones we took on this recent tour is in public, meaning you're surrounded by strangers, and mostly bunks that are all taken. I was surrounded by some nice babushkas and they were sweet and cute old ladies. I'm a big fan of trains but even then, I felt a bit uncomfortable after sleeping on them for two weeks, sometimes surrounded by snoring drunk Russian tough guys. Fatigue after gigs and lugging your instruments and gear and luggage on board late at night makes you think of home, and THE MEANING OF LIFE. It’s not really romantic, but if you’re a masochist like me, it whips you into shape and will make you appreciate all the little things life has to offer. Everything we worry about in the Western world are luxury problems. For hardcore travelers and cheap ass dudes on a shoestring budget only.

The Poplist with the Cyclist

The Poplist with The Golden Awesome

The Poplist with the Cyclist

The Poplist with The Golden Awesome