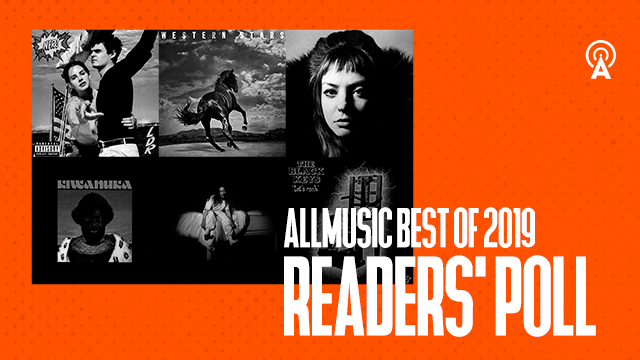 After a month of voting, we've tallied the results and can now present the 10 best albums of 2019, as voted by the AllMusic readers. Some old favorites saw challenges from artists a generation (or two) their junior, making for a strong mix. Thanks for voting, thanks for reading, and thanks for sticking around into 2020.

"Ode to Joy reveals that after their sabbatical, Wilco are more than willing to explore the boundaries of their music, and they do so with the confidence and sense of daring that have marked their best work from Being There onward." (Full review)

"Blues, garage, and old soul remain at the foundation of the group's sound, but they've swapped jammy excesses for over-saturated fuzz guitars and stacked vocal overdubs. Scratch the production gloss a bit, and it's apparent those six strings are balanced by clever drum loops and other digital flair that give the album a modern vibrancy, even if its sensibility is unabashedly retro." (Full review)

"On her big-league debut, Billie Eilish makes a bold entrance into the mainstream, leaving the fringes behind to embrace her role as an anti-pop star for the disaffected Gen Z masses. With a youthful, hybrid blend that incorporates elements of indie electronic, pop, and hip-hop, [the album] captures the late-2010s zeitgeist by throwing conventional boundaries to the wind and fully committing to its genre-blurring self." (Full review)

"All Mirrors was originally conceived as a double album with solo renditions of the same songs, but as the fully realized tracks took shape, Olsen committed to a definitive version. Though she may have initially built her reputation on stark and brittle atmospheres, it turns out that her trademark vulnerability is only elevated by these stirring, highly stylized interpretations, making it a risk that pays off in spades." (Full review)

"This third album wears its self-titling as a badge of honor, a statement of who Michael Kiwanuka as artist and individual is. Once more produced by Danger Mouse and Inflo, this 13-song set is a brave, colorful collection that provides an exceptionally well-rounded aural portrait of Kiwanuka's massive and diverse talent." (Full review)

"After reaching peak musical and lyrical density on Modern Vampires of the City, they're reborn with a West Coast perspective and pace on Father of the Bride, giving all 18 of its songs more room for their novelistic detail and surprising juxtapositions. It's easier to hear and feel where the band is coming from, in large part because [Ezra] Koenig's songwriting is clearer than ever." (Full review)

"Springsteen plays and writes with a gentle touch on this 2019 album, his empathy evident in his series of story songs and character portraits and in his embrace of another aspect of AM radio that he previously avoided: orchestrated arrangements so rich and enveloping they can sound softly trippy." (Full review)

"Not surprisingly, after over a decade, the foursome have matured, presenting an older, wiser perspective born of a well-adjusted shift into the hard-won comforts of adulthood. Considering the long gap between albums, there was a lingering fear that they couldn't live up to their own hype or legacy. Fortunately, Tool managed to improve and perfect their sound even further, resulting in one of the strongest statements in their catalog." (Full review)

"Grief is hardly the only emotion that Cave and his ensemble the Bad Seeds explores on 2019's Ghosteen, but a sense of loss and a heavy heart permeates these songs like a thick fog, as well as the bonds of family and how they can bring us together and keep us apart. Ghosteen sounds like the musings of a handful of lost souls, each trapped in their own barren prairie with memories that soothe and ache at once, and its power is overwhelming while the volume is low-key." (Full review)

"Lana Del Rey expands her vision with the most daring and vulnerable work of her catalog. Where Lust for Life had its share of huge drums and booming dynamics, many songs here tend towards far more solitary atmospheres. Where huge pop hooks met eerie melodrama on previous albums, here both extremities of that formula have grown more understated and direct. While much of her older material reveled in its own inconsolable sadness and detached numbness, the lush sonics and intimate narratives here draw out hope from beneath desolate scenes. The patient flow, risky songwriting choices, and mature character of the album make it the most majestic chapter of Lana Del Rey's continuing saga of love and disillusionment under the California Sun." (Full review)