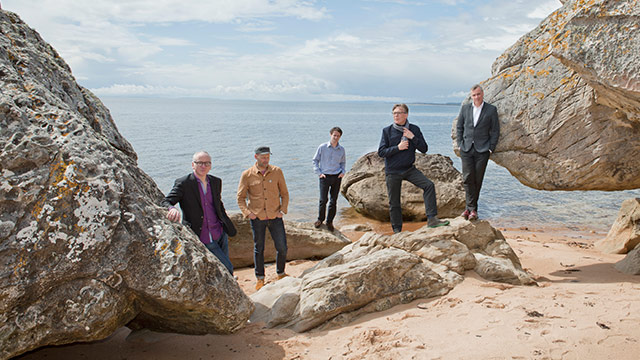 On A Catholic Education, the 1990 debut from Scotland's Teenage Fanclub, Norman Blake wrote nearly all of the albums 11 songs. That percentage has dwindled over the band's subsequent nine albums as Raymond McGinley and Gerard Love have stepped up with their own compositions; the band's new album, Here, has four tunes from Blake. His songs open and close the record, offering some its most alternately upbeat and sparse moments. In his four-and-a-half star appraisal of Here, Matt Collar hailed the "obvious craftsmanship" of Blake's "brightly engaging" "Live in the Moment," as well as the "transcendental sadness" that appears on "Connected to Life," the album's closer.

We spoke with Blake before the album's release to discuss his contributions to the record, which of the other songs he's most impressed with, and why he's happy that he isn't obligated to come up with a full album's worth of material each time the band reconvenes.

AllMusic: By the time you bring your songs to the rest of the band, how complete are they?

Norman Blake: What we tend to do, and we all work this way, is we start with a melody, and we’ll have some lyrics, but not many, just fragments. I’ll have an idea for the structure of the song, that’s pretty well-established, and as far as what they play on the track, I allow them to do their own thing, and we all do that. There’s some direction from the writer, but a lot of input from other members of the band.

AllMusic: "I'm In Love" is a pretty compact song. Did you know it needed to be that way from the start?

Blake: Interestingly, that song originally had a different melody, I’d written it with a particular melody, and we’d been running through it and I wasn’t quite happy with it. I had a bit of a eureka moment one evening when I’d been listening to it and trying to think of what I could do with it, and I came up with another melody, which was better. Something like that is pretty short and sweet – verse, chorus, verse, chorus, guitar break, chorus, finished, one of those.

AllMusic: It can be tough to give up on an old idea, but it sounds like you were ready to abandon that one.

Blake: Yeah, and I felt that I’d definitely improved it, the original one didn’t have the momentum it needed to have, and the new one seemed to fit a lot better. That happens when you’re making records, and it’s never good to just stick too closely to one idea, you should always be prepared to change things, you can always come up with something better. I had some of the songs in advance, but that one was written pretty close to the recording of the record. I tend to write songs when I need them, I’m not continually writing, I don’t know how many people actually do that.

AllMusic: Do you still play guitar regularly or just when you need to?

Blake: I do play guitar often, every day, I’ll play guitar. It’s something I get a lot of pleasure from, and it’s free, other than changing the strings every few months. I’m trying to improve my guitar-playing skills, I think I’m an OK rhythm player, but I never had a great understanding of the fretboard. When I was a kid, I learned how to play piano, but I just picked up a guitar and someone showed me a few chords, so I don’t know any theory. I’m trying to improve that, and it’s fun to pick up an acoustic guitar and noodle.

AllMusic: You play some leads on "Live in the Moment," another of your songs on the album.

Blake: Yeah, the distorted fuzz guitar, it’s a pretty straightforward part, I felt like I could handle that one. That’s a fuzz pedal straight into the desk, we tried a few other pedals before we settled on that one, and we’d done that before. It’s a very distinctive sound, we tinkered for maybe 20 minutes or half an hour, we tend make decisions quickly when it comes to tones, and we’ve been using the same amps forever, a late fifties Fender Deluxe for recording, and we have a seventies Champ, and all the guitars are recorded with those.

AllMusic: When you hear bands talking about taking three weeks to find a drum sound, does the thought of that drive you crazy?

Blake: Yeah, I think it’s a waste of time. The most important thing is always the song, and if you get too hung up on the sound, that would sap any creativity, at least for us, we’d be so bored that we’d give up. In recent years, I’m more into just putting things down. Maybe in the past, I’d have built the whole thing in my head, drum parts and guitar parts, but I’ve realized that it’s more fun and it’s better to just allow people to express themselves. I don’t like to spend too much time recording, I like to put them down and move on and capture the moment. That’s more appealing to me these days. The best thing is just to make music and not think too much. If you have a good amp and a good guitar, your tone’s going to be pretty decent anyway. Over the years, because we’ve been doing it for so long, there’s no magic in the studio, microphones and EQs just work a certain way, and if you know the basics, you can’t get it wrong.

AllMusic: "The Darkest Part of the Night" isn't an especially bleak song, but it's not as optimistic as the others you wrote for this album.

Blake: I think all of us write songs about what happens in our personal lives, and life is full of ups and downs. That’s me referring to my personal relationships without being too frank, just drawing from what I’m thinking about emotionally or politically, something like “Live in the Moment” has a political element to it, as well. I like to write about how I experience life, and I have to write that as someone who’s now 50, who’s more aware of his mortality than the guy who was writing songs when he was 22. That inevitably becomes a bigger part of what you’re going to write about, if you’re writing about your life experience.

AllMusic: "Connected to Life" is the slowest song on the album. I have a hunch that it's harder to write slow songs, is that true?

Blake: Definitely, and that one has lots of space. There are people who are really good at it, like Bill Callahan, that’s why I love his music, because of the space that’s there, and how pure his words are. A song can be just three sentences, spread out over seven minutes. I don’t have many slow songs that are as stripped-back as that, but the lyric came to me quite quickly, and it wasn’t too difficult to put that one down.

AllMusic: Did you know right away that it would be the closer?

Blake: Yeah, I think so. After we’d recorded all the tunes and started thinking about sequencing, it quickly became clear, it didn’t seem like it would fit anywhere else, you can’t start a record with it, I don’t think you can start one of the sides with it, it seems like a nice way to bring it to an end. The album starts uptempo, and over the course of the next 40 minutes, it starts to slow down and lose momentum, so it seemed that it should fit right there, grinding things to a halt.

AllMusic: It doesn't just slow things down from an album perspective, but even just the song manages to slow itself down.

Blake: It does, there’s a section in the middle where you’d normally have a guitar or piano break, we were really struggling with what to do, and they just started playing some feedback over that section, because every time we tried to put a melody there, it was just too much, it was very strange. We discovered that a textural thing was what it needed, and it was quite odd. We tried mellotrons and synths and all sorts of stuff, but that was the only thing that really worked, some ephemeral texture.

AllMusic: Does a song like that have a place in the live set?

Blake: I do, actually, I think something as spare as that could work well live, because you could really use the detail, there’s a big thumping kick drum and acoustic guitar, it’s very simple, so it should translate well in a live context.

AllMusic: Of the songs the other guys brought in, did anything especially blow you away?

Blake: There’s a lot of things, but one of my favorites is Raymond’s song that has the Krautrock-y section at the end, “I Was Beautiful When I Was Alive,” I really like where that song goes. It starts with a fairly slow, downbeat thing, and then it changes into this sort of metronomic outro section, which I really like. Raymond was recording a lot of the record, being the engineer, so he had to wait until the end before he could put down his vocal parts, and we were all waiting in anticipation to see what he’d come up with, and I think those are the freshest for me.

It’s masochistic to listen to your own music, so I won’t be playing it any more. You play it a lot when you make the record and when you’re mastering it and getting ready for the release, but after that, you don’t get the same enjoyment. The creative process is the thing the musicians get the most enjoyment from, and once you’re finished, you say, “Move on.” I think I’m now at that stage. We still have to play them live, which will be nice, we haven’t even rehearsed them yet, we have to arrange them for the live shows.

AllMusic: On the first album, you had a writing credit on nearly every song. Are you glad that duty has become more shared as the band has gone on?

Blake: Sure. It’s been helpful that the band’s maintained a decent standard of quality through it all, because if you’re looking for one person to write ten albums’ worth of material, that’s like 120 songs, and it’s difficult enough to write one. By spreading the songwriting duties, it helps us keep a reasonable standard across the 10 albums, we’ll come into the studio with six songs each and self-edit them down to four, and use extras for B-sides.

AllMusic: If someone in 1990 had told you that this band would make 10 albums...

Blake: I think I would have been surprised by that. Most bands would be, not many people get to 10 records, bands break up, often after one record. It’s a great achievement, it’s something we can look back and be proud of.

'Here' is out today on Merge Records. Teenage Fanclub will be on the road for the rest of 2016.