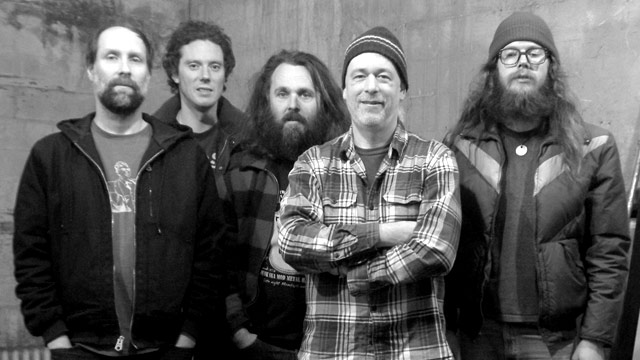 The creation of Untethered Moon, the first album from Built to Spill in six years and the band's eighth overall, wasn't an easy one. Members came and went, and frontman Doug Martsch wasn't happy with what the band was getting for a few years, but with the help of a number of live shows and tearing through a number of bond-strengthening cover songs, the Idaho-based band got back in gear and put together their new album, out this weekend on vinyl for Record Store Day, followed by a full release on April 21.

We talked to Martsch about how making records is different from how he imagined it before he began in music, why he sticks to old reggae and soul albums in his spare time, and the art of picking good cover songs.

AllMusic: As we get older, time moves differently. Does six years between albums feel like a lot of time to you at this point?

Doug Martsch: Six years is just a flash now. We actually started recording in 2012, and then the rhythm section guys quit the band and we bagged it, turned it over, and spent 2013 breaking in our new guys and 2014 making the new record, so it’s been a long time but we've been working for most of that time.

AllMusic: Do you remember any especially painful long waits as a kid between albums from an artist you loved?

Martsch: Oh god, of course. When I was in high school, waiting for the new David Bowie to come out, that felt like it took a long time, and then it was extremely disappointing, Tonight. It was a drag. But I made myself like it. I saved up my allowance or two weeks of allowance to buy a cassette and I’d make myself listen to it until I liked it, because I couldn't deal with having wasted the money on it. But I figure we have so many records, I don’t feel like too many people feel that way with us.

AllMusic: How long did it take for you to accept that Tonight wasn't that good?

Martsch: It was a gradual thing. I go back and forth, sometimes I think I still like it, certain parts of that record.

AllMusic: The new album came in fits and starts, how different is that from how you imagined the record-making process when you were a young aspiring musician?

Martsch: I think the thing I most imagined when I was young was that people knew what they were doing, that musicians knew what they were doing, and maybe some of them do, but I certainly don’t. Even though we've done it so many times, I have no idea what I’m doing, how to put a song together. Anything could happen, you could go anywhere with it. So I imagined we’d have a better idea of what we were doing when we made records than we do.

AllMusic: Now that you've been doing it for a while, do you have a favorite part of being in a band?

Martsch: When you’re in the studio, rarely ever are you like, “Wow, we did it, we built this great thing,” it can be really tedious, going over a guitar part 50 times, then finally being like, “I guess that one will work,” it’s a lot of let-down kind of stuff, kind of sausage factory stuff. But sometimes it really can be rad, having a good guest musician come into the studio who just kills a part for you, that’s really exciting. Then writing songs, that’s even worse when for every 100 ideas, you have 99 of them get thrown out. Every once in a while you come up with a little medley that just kills you and it feels so good. I like all the time leading up before you make the record, because you have this sort of infinite potential to make any kind of record, and it could be so good, it’s fun to just imagine how good it could be.

Then you get in there and there’s the limitation of your ability, of how much control you have over that stuff, and you get something down that’s exciting, but you also find that you’re disappointed by how you do some things different than you imagined. Playing live is similar; sometimes it’s great, sometimes it’s not. It depends on what kind of stage you’re on, mostly. If you can’t hear your vocals all night, you just do the show and hope you’ll do a good job, but it’s not very fun, not hearing yourself at all. But if it goes great and your guitar sounds good and you have that relationship with the audience, it’s really exciting.

AllMusic: Does understanding the compromises that you've had to make to get music made affect how you hear the music of others?

Martsch: Of course, and maybe that’s part of why I like old stuff so much, I like old reggae and soul. That stuff is so mysterious-sounding to me, so real, you know everything is going down for real, whereas music today, you don’t know about samples or if they’re using the same chorus. I feel the same way about using computers as I do about CGI effects or something, like with the Star Wars movies or something, where they were originally models and that was part of suspending your disbelief, you were trying to figure out how they did it, but now with computers they can just do it with a computer, there’s no real mystery to it.

AllMusic: Your band plays a lot of covers. Is there a track that you learned and were surprised by how intricate it was?

Martsch: “Don’t Fear the Reaper” became more special after I learned how to play it, it’s a pretty simple song, a lot of it, but that song has such a complexity to it. It was just fun to play, when we would do the cover we’d just want to play it over and over but then we’d say, “No, we have to do these songs,” and then it’s like, “Are we going to play the ‘Reaper’ again?” When we first got together with the new rhythm section, we learned a ton of covers. It was good for everyone in the band to have fun, break away from our old material that we were having to learn a lot of in a short amount of time, it was fun to have the covers go to and take breaks from those songs.

AllMusic: Did you ever get onstage with the intent to play a cover and realize halfway through that you weren't prepared enough?

Martsch: It depends on how much time we have. We just did a tour where we played a Byrds song, “Eight Miles High,” and we messed up the verses quite a bit because we hadn't had enough time to get into it, and we’re harmonizing, so one of us fucks up, we’re both fucked up. The odds of us both getting it right were hard for a while, but then we did “Third Uncle” by Brian Eno, and that’s a ton of random words that we had to memorize, and we had more time to work on it, we would practice it all day long by ourselves until we were able to do it. That’s really fun, too, memorizing something, I really enjoy that, I enjoy the feeling of going from, “That feels uncomfortable, I don’t know what the hell’s going on,” to where each pass feels better and then you can play it, sing it, that’s such a cool feeling to me.

AllMusic: Has the response to any of the covers surprised you?

Martsch: No, we’re always keeping our eyes open for stuff, and we try to do stuff people will recognize. There’s a festival we do where we do three nights, we do a regular set, and one that’s all covers, and so we wanted to do a special cover for this show, and I was trying to pick a song everyone could rally around, and we couldn't come up with anything. Then someone sent me a Michael Hurley song, or introduced me to him, and one of his songs killed me, so I learned how to play it, and showed it to the band, I just played them the song because I thought it was so great, and it was one of those things where the whole band liked it. I thought I’d put it on and some people would wander off, maybe one of the guys would listen to it, but they all were enraptured by it and loved it, so we kind of jammed it, and I said, “I don’t want to do this at the show, it’s a folk song,” and then sure enough, we played it. It was the last thing in the world I wanted to do, but it made sense, and it was wonderful. I thought it was great and we got a lot of really nice comments.

AllMusic: How do you listen to music now, do you have a routine?

Martsch: I don’t search for music at all, I don’t try to find new things, I almost try and avoid new things. Every once in a while I’ll stumble across a new band that I like for some reason. Slam Dunk is a new band that I discovered a couple of years ago that I went crazy about, a band from Canada. Every once in a while there’s something I’ll mention, but for the most part I listen to old soul and reggae, things I liked when I was a kid. Recently I was listening to my own stuff, because I was trying to write songs, so I kind of immersed myself into my own thing and tried to work on stuff all day long. There’s a lot of good local bands that I listen to.

The Soft Moon's Luis Vasquez, More Than a Post-Punk Obsessive

The Soft Moon's Luis Vasquez, More Than a Post-Punk Obsessive