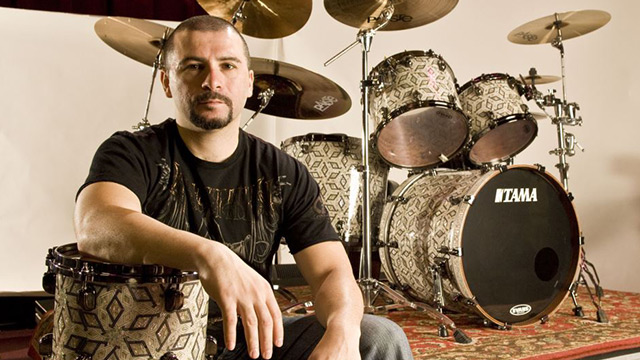 It's been nine years since the last System of a Down record, and drummer John Dolmayan has been getting antsy. He was briefly part of SOAD guitarist Daron Malakian's band Scars on Broadway and took a stab at joining Smashing Pumpkins, but beyond sporadic touring with his old band, Dolmayan is fed up with not being in the studio. His frustration drove him to start a new project, dubbed These Grey Men, a platform for reinterpreting some of his favorite songs while enlisting the services of various guest vocalists who Dolmayan won't reveal just yet, but says they'll be familiar names to fans of System of a Down.

To fund the recording, Dolmayan has turned to Kickstarter, offering a wide range of perks from the standard signed copies of the album and being credited in the liner notes to a night out in Vegas with Dolmayan, a backyard concert, drum lessons, and a "golden pass" that grants access to any show Dolmayan performs in the future. We chatted with Dolmayan about the songs he's going to tackle, the album he listened to every day when he was 18, and the most challenging part about performing with System of a Down.

AllMusic: You said on the Kickstarter page that you started the project partially because you missed getting into a studio and putting out music. When did that feeling sink in?

John Dolmayan: It’s not even something that happens right away. For example, if you eat a nice meal, you’re not hungry right away after you’re done with the meal, it takes a while for you to think about food again, and then it takes you longer to be hungry and longer than that to eat, and it’s similar with music. The creative process is a part of artists and musicians in general, and the recording process is a big part of that creative process, it’s a good outlet for your creativity. The lack of it is something you don’t notice right away, but it creeps up on you through time. The band took its hiatus in 2006, and in 2008, I was fortunate enough to record the Scars on Broadway album, so that satisfied me for that time, and then two years passed, and I started to need it again. So about every two years, you start to show yourself more and more. About a year and a half, two years ago, I started to feel really bad just touring, and I didn't really know why at the time, because touring’s a lot of fun, we make a good living at it, we have our fans, and that end of it was satisfying, but the creative part was not being fulfilled.

AllMusic: What made you decide that covering songs was the way you wanted to return to recording?

JD: I like to rearrange music in my head when I hear it and think about what I would do if I was playing on it, and I think about where the musicians were mentally and emotionally when they were recording it. So I thought about that more and more and felt compelled to start keeping a list of the songs that I felt I could really affect a cool change, and songs I wanted to take on as a challenge.

AllMusic: You posted a picture with a drum head that had a list of songs written on it, so let's talk about some of those songs. One of them is "Street Spirit," which isn't a very drum-heavy song in the original version. 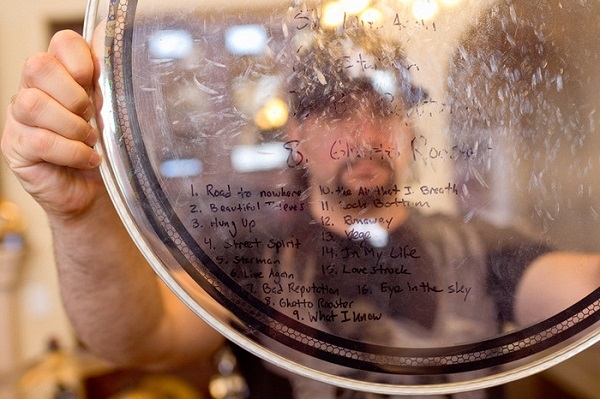 JD: They come in about halfway through the song, but in my version, they kick in immediately. It’s a fantastic song, and the video, it’s black and white, a lot of slow motion and ballerinas, it’s really artistic. That’s a great album in general, one of my favorites, and it’s a song that for a long time, I’d listen to and say, “I kind of wish this happened in the song…” and it works very well the way I play it. That’s a credit to Radiohead, they made a song that’s so exceptional and did such a great job with it that they forced me to put myself in the song. I love it when people do that with the songs that I play on, and imagine how they’d play it, how they’d interpret it. I hope they care enough to do that.

AllMusic: Is "Hung Up" the Madonna song?

JD: It is. I don’t even know how to explain it to you, you just have to trust me that it’s very different from the original. Her song samples ABBA, so she thought about getting inside that song and making something new, and now I’m doing the same thing with both her song and their song.

AllMusic: There's a lot of songs called "Runaway," so which one are you doing—Bon Jovi, Kanye West...

JD: Neither, Del Shannon. I fucked that song up so much. It’s one of my favorites, and that’s definitely going to go on the album. I ripped it apart, rearranged it, put it back together, and I’m really happy with it. I love that show Crime Story, that was the first time I ever heard that song, it was the theme song for the show, and I thought, “What a perfectly-written song that is.”

AllMusic: System of a Down did a few covers, like Black Sabbath's "Snowblind" and Berlin's "The Metro." With "Snowblind" in particular, it takes a while to figure out what the song is. Will that sort of delayed recognition of the source material carry over into this record?

JD: There’s always that moment. On some of them you will be able to pick it up right away, and on others you may never be able to pick it up. What I should do is not put the names on it, make it really challenging. Why do a cover the way it was originally, why not just listen to the original? If you’re going to do it, do it your way, don’t do it the way you assume people want to hear it, do it the way you want to hear it. That’s the same philosophy I’m incorporating in this project. I also want to challenge my listeners, it’s not just about challenging me but about challenging you as well.

AllMusic: When it comes time to play a System of a Down set, are there any songs you see on the setlist where you say, "Uh oh, that one's tough."

JD: None of them are tricky, it’s just a matter of am I going to have energy to get through the song, because we tend to take almost no breaks between songs. We have a very fast-paced set, and the first six or seven songs are like death, just balls out all the way, and I really don’t get a break until the tenth song. By then, my arm’s about to fall off. And now we’re playing longer sets, so before, I could make it through a 40-minute set, no problem, now it’s an hour and 30 minutes, and the songs that we’re playing are harder to play, they take more energy, and it’s just a matter of having the stamina to get through it. Our minimum is about 25 songs, the most weave ever done was 34, I think. It took me a day or two to recover from that one.

AllMusic: What do you think is the hardest part of drumming that non-drummers wouldn't realize?

JD: In general, I think drums are a lot harder than people think, and it becomes harder when you’re sitting behind a drum set for the first time and you're seeing all the shit and you try to coordinate four limbs. For a layman, they think of drums and say, “Oh, that’s easy,” but the reality is it’s probably the most difficult instrument to play on the stage. You almost have to be ambidextrous to be a drummer, you have to have timing, you’re the backbone of the band, so you have to keep your timing for the band in general. Keith Moon was accused of being a sloppy drummer, but if you've ever heard the songs the Who did without Keith Moon, the timing is terrible. He was one of the best players to record. So in general, it may look like a straightforward song, but there are always nuances, like the way I start my rolls or finish my rolls, it’s just me, there’s no other way to define it.

AllMusic: Do you think there's an album you've heard more times than any other?

JD: Pink Floyd, The Wall. When I was 18, listened to it every day for an entire year. That’s 365 times at least, because I’m sure some days I doubled up. I could not think of a more complete album at all, if you gave me 100 years, I don’t think I could come up with a more complete album than The Wall. It took me somewhere else, more than just listening to music, it took me on a journey of someone’s life, a very sad life, and then when I saw the movie, that was even better, I was like, “Wow,” I had my view in my head, but now I could view it the way they imagined it, as well.

AllMusic: Did you catch Roger Waters' recent revival of The Wall?

JD: I saw it four times. We just happened to be touring in the same markets for like a year, there were 40 or 50 shows where we were staying at the same hotels. I got to meet Roger Waters, although I didn't have a conversation with him, I just met him and said, “Nice to meet you,” and that was it. I’m more of a fan post-Syd Barrett, the Syd Barrett stuff is a little too jammy for me. I don’t think they really solidified until Roger took over a lot of the writing and Gilmour came in, then it became what I really wanted to hear.

Recently there was an album by the band Midlake called The Courage of Others, it’s phenomenal, and this is a band that I think could get up to that level of writing where they’re creating albums that just work every time. Unfortunately, I didn't like any of the albums they had previous to that one, or the albums they came out with afterwards. They hit their groove with this one, and then the singer left right afterwards. I was so compelled by them that I got in touch with their singer because I wanted to hear more, I could listen to 10 albums like that. He’s a really nice guy but he’s kind of introverted, and he’s working on a solo album. I think I freaked him out, I was way too passionate.

AllMusic: Does that kind of disconnected rock star in the story of The Wall still exist?