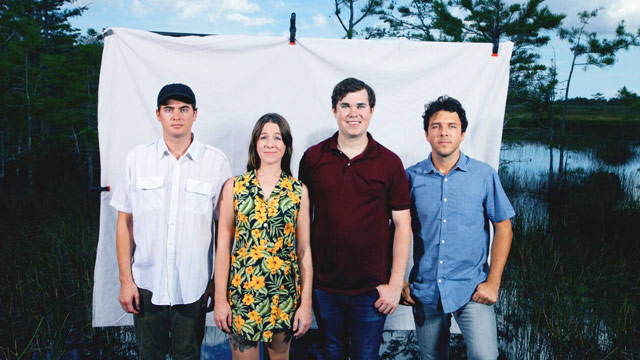 When Surfer Blood frontman John Paul Pitts got cracking on the band's fourth album, he decided it was time to go back to doing things akin to how he wrote songs in the early days. The tightness and melodies still had their place, but when he wanted to stretch his legs and get a little out there with it, he wasn't going to restrain himself. The result is Snowdonia, named after an imagined "island of songs," and the band's first record since the passing of original guitarist Thomas Fekete.

We spoke with Pitts about expanding the band's sound while maintaining its footing, the bands from his high school days that still inform his songwriting, and the uncertain road ahead.

AllMusic: The word "ambitious" has been used a lot to describe the new record. Did you feel like you were being particularly ambitious while making it?

John Paul Pitts: I’m flattered, because it usually means that someone’s reaching to realize their potential, and I think I was trying to do something different. When I went in to write this record, I was thinking about our first record and songs like “Anchorage” and “Slow Jabroni,” which are songs that don’t rely on a strong backbeat rhythm or a chorus or a catchy vocal part, they are songs that have a slow build and maybe don’t go where you expect them to, and those are some of the songs that I’m most proud of. It’s a shortcut a lot of times, if you have a catchy guitar part or vocal melody, to just try and re-emphasize that over and over. So I was challenging myself to try stuff that was more out of the box than I’d done before. Now’s as good a time as any to try some new stuff.

AllMusic: The eight-minute title track feels like a real centerpiece for the album. Did you know it would be that sprawling when you started working on it?

Pitts: I just kept tacking things on for that one. I did a lot of the writing for this record straight into Garage Band, recording parts and mixing them together, for the sake of being able to move super fast and not overthink things and not get lost in trying to make our demos sound like a record. One thing led to another, and that song has a really cool flow that a lot of our stuff hasn’t had in the past. It has that kind of Sonic Youth intro that also sounds like it could be from The Legend of Zelda or something. I wrote that without the expectation that it would amount to anything, it was an exercise in writing a long, guitar-driven song to see what happens, and it turns out it’s one of my favorites.

AllMusic: Are you nervous about putting that one in the live set?

Pitts: We’re going to try it out on this tour. The poppy single has gone over really well with the crowd, and “Six Flags,” which is a more anxious song with a jammy part, had a few people scratching their heads, but it’s important to remember that going to see a show live and listening to an LP in your house are two very different experiences. What works on a record doesn’t always work live, and I’m usually bummed when I see a band and they sound exactly like their CD. We’ll work out the kinks.

AllMusic: You're putting out a new album and going on tour in a time when there's a lot of uncertainty in America. Are you able to disconnect yourself from that feeling or do you bring it into the work?

Pitts: I expected to be touring under much different circumstances. It helps that I don’t have cable news so I can’t watch it and get mad, so I have this disconnect a little bit. I will sit there with my laptop and read the New York Times and get angry, read the comments, consider writing a comment of my own, and then don’t do it. But I’m also mad about what it means to be an American right now, and I’m not looking forward to having to explain this to people in Europe in March when we tour there. At the end of the day, it’s going to be four years of our life, unless something crazy happens, and there will be plenty of time to be outraged and to get organized and unite people who don’t want to move backwards, and we can see what we can do here in Florida. That will take getting people focused and smart and taking it one day at a time. At the end of the day, life has to go on.

AllMusic: If you were to record these songs now as opposed to last year, do you think you'd be in a significantly different head space and they'd have come out differently?

Pitts: That’s tough to tell. There might be some more snarky lyrics in there, this is something I think about a lot, but honestly, this record is a culmination of a lot of personal things for me, too, and when I’m writing, it’s usually about myself and my personal life, or that’s where it starts. A lot of the songs on this record would still be there if I set out to make it today.

AllMusic: Did these songs come out pretty close to the way you imagined them in your head?

Pitts: With this one, it sounds very similar to the way it sounded in my head originally. I wanted to make a record that wasn’t overly glossy. This is the first time I’ve mixed a record myself since our first record, and when you’re relying on other people to help you craft your sound, sometimes things end up sounding not how you imagined at first, and you still like them, but they are not quite what you expected them to be. With this record, this is the first time I’ve had to stick out and write a record alone since our first record, and since I never really took my hands off of it at every stage during the process, I feel really proud of it, and it’s the record I want to put out into the world. It’s done now, and that’s cool.

AllMusic: The album cover is pretty striking. Did was it an easy choice when you saw the photo?

Pitts: That was a pretty easy choice. I have a friend who sent all these pictures from when she went to Antarctica, and I was already flirting with the name Snowdonia anyway; it was a song title first, and I liked it for the album name, like an island of songs, far off from the rest of the world. I saw that image, and it was so striking, and that’s when all of the parts finally clicked together in my mind and it felt finished.

AllMusic: What are some musical elements you love but wouldn't ever be able to use with your band?

Pitts: I do love hip-hop music, but I don’t think I’ll ever rap on a Surfer Blood song, I don’t think that would be very good. I love the saxophone, but you probably won’t hear any saxophone solos in our songs, unless it’s in a fucked-up Bowie kind of way. I like to try a lot of new things, but at the same time, staying in your comfort zone has something to be said for it, when you feel you can really express yourself that way. I think Surfer Blood gets a little broader with every record, but you always want to feel like you have the ability and command of your own musical language to be able to actually create emotional songs and moods and textures. That informs why we’re the type of band we are, it’s the sensibilities I decided were my favorites.

AllMusic: How early did you land on those sensibilities?

Pitts: I was always a bit of a snob, even in high school. One record I still swear is a great record is Dinosaur Jr.’s You’re Living All Over Me. After I heard that, I wanted to play guitar like J. Mascis and write sensitive, distorted Neil Young songs.

Before that, I listened to whatever was on the radio, I was really into At the Drive-In and Fugazi, but that was when I decided I wanted to write more sensitive music, that melodic stuff was more for me. Then I got into Sonic Youth and stuff like that, and that still very much informs how I play guitar and how I write vocal melodies and stuff. My hope is to be that band for somebody in high school today. There is something about that age where music is everything to you. I’ve listened to Tame Impala and their records a few dozen times and I acknowledge that it’s really good, really impressive stuff, but I’m not going to start writing songs like them now.

AllMusic: Have you had the chance to meet any of your musical heroes?

Pitts: I have, I’ve been blessed. At the end of the day, you can question my choice to leave college to be in a touring rock band, and there’s all kinds of things you could criticize about that, but I wouldn’t trade my twenties for anything. I met Stephen Malkmus in a train station, and we joked around like colleagues or something, it was cool. We just finished a tour with Guided By Voices a few months ago, and Bob Pollard is someone who I want to be like, I’d like to put out three LPs a year and tour all the time and be super-creative when I get older. We toured with the Pixies, and I met Kim Deal back before she left the band, so I’m super lucky that I’ve had some life-affirming moments.

Any time that self-doubt creeps in, I think about all the amazing experiences I’ve been able to have through music, and it makes me realize that this such a cool and unique way for me to choose to live my life, and I’m really happy that I’m doing it.

'Snowdonia' is out on February 3, and Surfer Blood has live dates booked through April.