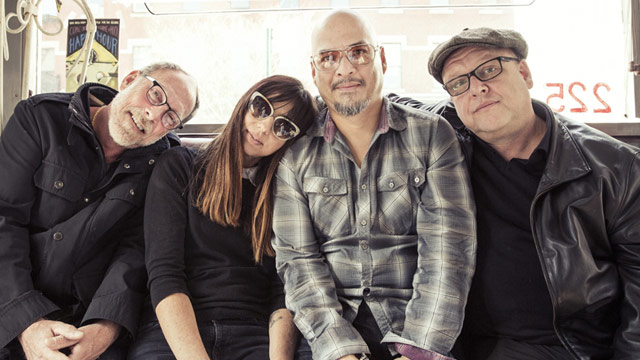 When the Pixies found themselves again looking for a bass player in late 2013 after parting ways with the Muffs' Kim Shattuck, who had briefly served as a replacement for founding member Kim Deal, guitarist Joey Santiago dug back into into his history and thought of Paz Lenchantin, a multi-instrumentalist who played with him in his post-Pixies band the Martinis, and had gone on to play in A Perfect Circle, Zwan and the Entrance Band. A fan since the Doolittle album, Lenchantin finished the remainder of the Indie Cindy touring cycle before being made a full member, even contributing songwriting to the band's new album, Head Carrier.

Lenchantin had to get on the same page with drummer David Lovering, which wasn't a particularly challenging task for the veteran performers, and according to the rest of the band, she immediately found her place as a source of lightness and energy in a band that's had its share of strife over the decades. We chatted with both members of the rhythm section about the recording of Head Carrier, the sign language the band uses onstage, and why hummus has been on the band's tour riders since day one.

AllMusic: How much extra work is it to get on the same page as a rhythm section?

David Lovering: With Paz, she’s been with us for three years now, and she’s an incredible bassist, she’s a master at it, and she plays so well that she’s actually stepped up my game, because I have to play better so I don’t get embarrassed. She’s been fantastic, and she’s still the new woman, so for all the men there, we’re well-behaved around her.

Bass players and drummers know that as long as the rhythm track is going, everything else can fall down around it, but we can keep going. She’s played Pixies songs for three years before we did Head Carrier, and it’s just been a joy. I can’t say there’s any specific feeling, but I just know we’re clicking, and especially with the new stuff, it’s her playing on things that we came up with. One of my favorite things about this album was how comfortable it was, because I’d played with her a bunch of times and we clicked on that, so when it came time to record, I was extremely happy.

Paz Lenchantin: It’s important to all play together, and maybe in the beginning I could have been slightly more on top of the beat, and it could have been because it was a lot of precognitive ideas of the songs, the first few shows, and then once it wasn’t about, “Oh, am I playing the song right?” it was more about enjoying where I am and what’s going on, then I can lean back a little bit. I think we’re at a really good place now.

AllMusic: When Francis brings in a batch of new songs, do you try to figure out what they're about?

Lovering: I know Charles, we’ve been together 30 years, but most Pixies lyrics, like most music I listen to, I can’t really repeat word for word. When he comes into the studio, I know he most likely doesn’t have lyrics then, or if he does, they’re going to change. I like the melody line of what he’s singing, but as far as the inference of what the content is, it’s not a big concern. I use it as a time thing, a melody thing. Certain words or lines, I definitely know some things that serve as anchor points for me while I’m playing.

AllMusic: Paz, you are a co-writer on "All I Think About Now." Did you have to build up any extra courage to bring up the idea of you contributing writing on your first album with the band?

Lenchantin: Maybe there was some sort of wall I might have had that I’d made up myself, that Francis is the one who brings in the music and then we all work on it and arrange it and all of that, but I never really thought to bring anything to the table. We were all living together next door to the studio, and it was the last song that was brought up during the recording process. I had heard a song that he wrote, incorrectly, and it was its own song. So I thought to present it to him because it came out of something he started, it wasn’t anything thought out, it was this natural way of saying, “I heard this thing, it was something you came up with, but I heard it completely wrong.”

I showed it to him and he fancied it and he said I should sing on it, which was a surprise, I wasn’t thinking of anything other than that the song was worthy of a listen. When he said, “You should sing on it,” I said, “OK, but you should write the lyrics, let’s keep this collaborative,” and he said, “What do you want to sing about?” and I easily said, “Kim,” because she’s been part of this whole process for me, like a phantom in my heart throughout this journey. I couldn’t help but give a tip of the hat to Kim for bringing me to this moment, one of the most exciting and proud moments of my career.

AllMusic: Were you lying in bed that night saying to yourself, "I just wrote a Pixies song!"

Lenchantin: I didn’t want to get too excited until I knew it was on the record. We had a whole bunch of songs that we’d been working on, and this was the last minute, and it was going so quickly. It wasn’t until I got the mixes back and the order of the songs and what Tom picked were the strongest of an entire record, and the first thing I saw was my song at number nine, and I was like, “Wow, OK, this is happening!”

AllMusic: It's not rare for a Pixies show to have more than 30 songs in the set. What does it take to gear up for a set that long?

Lenchantin: There’s no talking, the music is the talking, and I really like that about the band, it’s just about the music, and there’s enough great songs, and there’s so little time, so why waste it with talking when we could play another song?

I’m just ready to go, I love it. David is so incredible, sometimes I watch him and I’m just in awe, I forget I’m onstage, I’m in a trance going, “Wow…” You’ll see me a couple of times with my back to the audience because I’m just staring at David going, “Oh my gosh.” The first day I met him, the first thing he did was a magic trick on me. I just knew right away that he was welcoming me with his magic.

AllMusic: Was there anything you had to learn quickly once you hit the road with them?

Lenchantin: There is some sign language onstage that I didn’t know what it was onstage, because there’s no setlist. So there are these signs that this is what the next song is, and I’m just looking at David going, “What is that song, I don’t know what song that is.” One is the way you might sign a kick drum, boom, boom, boom, with your fist, and that would be “Isla,” because he starts with the kick. So there’s things like that where I had to learn the sign language of each song when there was no setlist, and I learned them pretty quickly.

AllMusic: When a band gets your tour bus after you, what will they find left behind?

AllMusic: Is that the way it's always been?

Lenchantin: I really love it when it’s the homemade hummus, when they really went out of their way to say, “Pixies like hummus, we’re going to make this hummus,” that’s very sweet. If I see a homemade hummus, I’m guaranteed to give it a try.