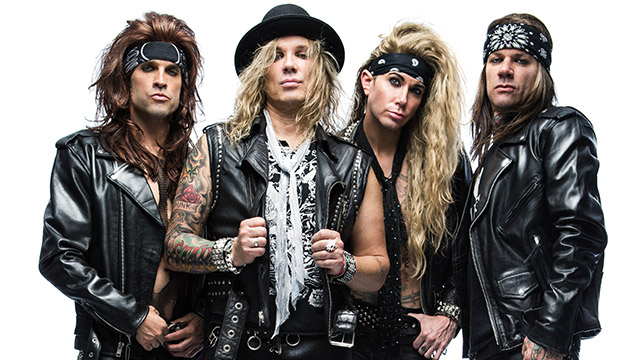 From their roots as Metal Skool, a Sunset Strip novelty attraction playing hair band covers and bringing celebrity guests onstage, including Kelly Clarkson, Tony Romo and Dennis Haskins, aka Mr. Belding, to their rebranding as Steel Panther, now penning originals but keeping their unabashed camp and sleaze, the Los Angeles four-piece has always existed in the portion of the Venn diagram where music and comedy overlap. They've broken away from the Strip and Vegas, touring internationally and releasing four albums of rampantly sexual and party-oriented material, including this year's All You Can Eat.

Today Steel Panther is kicking off its fall tour supporting Judas Priest, so to mark the occasion we had the members put together a few of their favorite unintentionally funny music videos, then drummer Stix Zadinia called in to deliver some commentary about what makes them so hilarious or cringe-worthy.

AllMusic: I really thought halfway through that it would turn into a Wicker Man scenario.

Stix Zadinia: They keep dancing around that pole, what are those called, maypoles? It’s a maypole with a Renaissance theme for a song called “The Safety Dance.” If that’s not unintentionally funny, I don’t know what is, I don’t know what kind of sense that makes. When they made that video, someone came up with that treatment and went, “OK, guys, we’re going to be Renaissance guys, medieval-looking guys, there’s a maypole, and you guys dance around it and we’re going to shoot you guys, and everybody’s going to be happy.” It’s mind-blowingly silly.

AllMusic: The extras in the background are clearly fatigued from dancing all day.

Zadinia: You know it was hot, you know they’re just miserable and they’re supposed to be jolly and frolicking, it’s such a weird juxtaposition with a pop, dance-y song and Renaissance, medieval times maypoles, it’s weird.

AllMusic: Did you first see this video as a kid?

Zadinia: I saw that video as a kid, yeah, it was on MTV all the time, because they had seven videos in rotation: Scorpions, “No One Like You,” Golden Earring, “When the Bullet Hits the Bone,” “Safety Dance,” “Video Killed the Radio Star,” “Der Kommissar” and “Rock Me Amadeus.” That was it. I thought to myself, “Why are they doing this?” I knew the first time I saw it, “This is stupid, this is a stupid video.” There should have been jousting.

Zadinia: You know what this video did, right? That was the video that fucking sunk Billy Squier. How powerfully awful is a video that it kills your career? Think about the songs that Billy Squier put out: “The Stroke,” “Rock Me Tonite,” “Everybody Wants You,” he put out some fucking great songs, and he puts this song out and does a video, and one video cancels out all that bitchin’ music. It’s a shame. He’s dancing around in a Flashdance sweatshirt, and it’s amazing.

AllMusic: The video was directed by Kenny Ortega, who did all of the High School Musical movies, Hocus Pocus and the Michael Jackson documentary after he died.

Zadinia: He fucked Billy Squier. That’s the thing about making decisions and let me people make decisions for you and being able to say, “You know what, I don’t want to do that,” and having a little vision and going, “No, that’s a little too lame for me.” He obviously didn't have that capability at the time.

AllMusic: There's part where he opens his closet and it's full of smoke, I was hoping he was going into Hellraiser world.

Zadinia: That would have been so much cooler, if Pinhead was in there.

Mick Jagger & David Bowie - "Dancing in the Street"
Two rock icons get festive in a dark, deserted street and cover Martha & the Vandellas for a charity single

Zadinia: It’s kind of reminiscent of the Billy Squier video for me, it’s like they’re supposed to be super bros, they’re dancing and having a good old time, and it’s just really light in the loafers. The song is what it is, but it’s the video that takes it over the top. It could have been something so much cooler. They’re just prancing around in the street, dancing. I imagine the director goes, “Action – OK, guys, just dance.” It’s so not rock and roll.

AllMusic: And there's probably a group of kids for whom this was the first time they learned who either of these guys were.

Zadinia: It was a shitty introduction to two legends.

Wham! - "Wake Me Up Before You Go-Go"
George Michael chooses life while Andrew Ridgeley fights for some camera time, any camera time

AllMusic: It's easy to feel for Andrew Ridgeley, he doesn't do much in the video.

AllMusic: Was the "Choose Life" shirt popular at your school?

Zadinia: I remember seeing them at school, there was a "Choose Life" shirt and then the "Frankie Says" shirts, in giant black letters, at school, and I remember thinking to myself, “Those are the lamest shirts I've ever seen in my life.” That was the sign of, “That person likes music that I don’t like, so we’re not going to hang out and rock together.” It was "Frankie Says," "Choose Life," all those bangle bracelets, that’s when I was like, “OK, you and I don’t have a lot in common.” [laughs] "Choose Life."