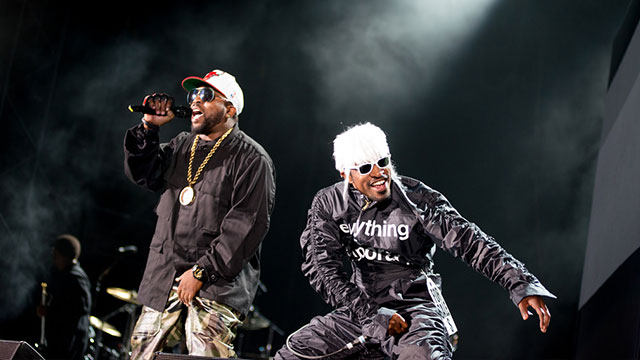 André 3000's jumpsuit was emblazoned with the phrase "Everything is temporary," which, in light of the enormous Price is Right-style price tag with the words "SOLD OUT" on it, could have been interpreted as a statement about OutKast's current status. But what it really did was highlight a lyrical theme that that flows throughout OutKast's catalog: impermanence. The chorus of "Aquemini" is anything but subtle with its repeated maxim that "The sun goes down, heroes eventually die," and follows it up with "Nothing is forever," while mega-hit "Hey Ya!" also uses the same line, in falsetto. But it was hard to ponder the temporary nature of things while staring out into the geological marvel that is the Gorge in central Washington state, a sort of Grand Canyon of the Northwest that serves as the backdrop for the festival grounds. Yeah, it will be gone one day, but as far as our lifetimes go, it's eternal.

After half a dozen shows, the OutKast live machine is fairly well-oiled at this point. The backing band and singers are spot-on, the production is simple but effective, and André and Big Boi look like they're comfortable. André was animated all night, using his noted lankiness to effect, swinging his limbs loosely while wearing his aforementioned jumpsuit and platinum blonde wig, while Big Boi sported a Chicago Bulls hat (no love for his hometown Hawks?) and large chain. As the chill-inducing opening notes of "B.O.B." rang out, the black and white American flag from the Stankonia cover was projected on a cube in which the members of OutKast paced, before bursting out to deliver that song's legendary mile-a-minute opening lines. The next eight songs were stone cold classics as well, from "Rosa Parks" to "Ms. Jackson" and the vicious slap of "Gasoline Dreams." Sleepy Brown emerged in a silk robe with purple piping for a pair of tracks, including the Number One smash "The Way You Move." His gentle high notes continue to offer a fun counterpoint to Big Boi's hyperspeed rhymes, but it does raise an important question: What does Sleepy Brown do backstage for the rest of the show? Candy Crush? Shop for different colored robes online?

The two members did mini-solo sets to showcase material from their respective Speakerboxxx/The Love Below albums, and while Big Boi's energetic, three-song block was a highlight of the night, André's songs remained as far afield from the band's catalog as they did when the album was first released. "Prototype" and "She Lives in My Lap" found him in stationary crooner mode, with slow, creeping visuals playing behind him, and led to a mini-exodus in the crowd, many of whom had been on their feet for nearly 12 hours at that point. But when OutKast locked in on their "Jedi rap shit," as Big Boi phrased it earlier in the night, they sounded like kings again.

On to other forms of royalty, SNL alum Maya Rudolph and her Prince tribute band, aptly titled Princess, performed in what's generally regarded as "the comedy tent," but besides a few winking flourishes and take-offs on Prince affectations, Princess performed a nonstop rousing hour of Prince tunes with proficiency and obvious passion. They gleefully worked through some of Prince's filthiest material, songs like "Head," "Jack U Off," and "Darling Nikki." The obligatory "Purple Rain" closed the show, and despite its inevitability, that final coda still makes the hairs stand up. The looks and hugs exchanged between Rudolph and her co-vocalist, Gretchen Lieberum, a friend since her college days, betrayed a certain a "Can you believe they're letting us do this?" sentiment, but the performance was anything but amateurish.

The dark pop band Phantogram worked with a high energy level that stood apart from the sometimes more atmospheric tones of their music, and delivered a strong performance as the sun went down. Songs like "Mouthful of Diamonds" became party-starters, even though vocalist Sarah Barthel's voice was sometimes lost in the wind that whipped through the festival grounds all day. Dusk is generally the time at music festivals when audience members look like they're beginning to regret their decisions, whether it's something they ingested or whether it's that they're in a full tiger costume or have a Yoda figure riding on their back, so shoulders began to slump. The weary hiked back to their tents, doubled their dosage, put Yoda back in his hut, and returned for the night-closing sets from OutKast and Die Antwoord. And there's two more days to do it all over again.