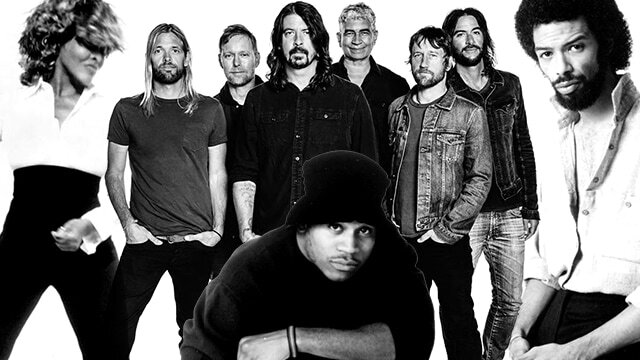 Each year, copious amounts of digital ink are spilled over who didn't make it into the Rock and Roll Hall of Fame and which genres are given short shrift. But this year's class is quite strong, so we found it more worthwhile to celebrate those who received the nod, and to give neophytes an entry point into their sometimes daunting catalogues. From a generational singer-songwriter to hip-hop icons to electronic music pioneers to a gone-too-soon guitar god, here's our breakdown of the Rock and Roll Hall of Fame class of 2021.


Tina Turner
Known for her resilience, indefatigable energy, and powerhouse performances, Tina Turner was already inducted in 1991 for her work alongside her late ex-husband Ike Turner, while her recent nod specifically acknowledges her solo career (and manages to enshrine her separately from the notoriously abusive Ike). She was the subject of a documentary on HBO Max earlier this year, and while she hasn't put out a new album in this century, her 1984 solo comeback Private Dancer brought her to the stadium rock heights of her dreams.


Carole King
Carole King was in the music world trenches since her teens, composing hits with her writing partner and later husband Gerry Goffin. Her songs were recorded by no less than the Beatles, the Drifters, Aretha Franklin, the Byrds, and James Taylor, and her breakout as a performer in the late 1960s culminated in the release of the 1971 juggernaut Tapestry. The album offered a blueprint for the burgeoning singer-songwriter movement of the '70s, and is still beloved for its blend of craftsmanship and emotional sincerity.


The Go-Go's
As their 2020 documentary repeatedly declared, the Go-Go's remain the only all-female group to land a Number One album featuring solely their own compositions and performances. Their 1981 debut Beauty and the Beat was a cornerstone of the nascent new wave movement, and blended 60s pop buoyancy with the energy of punk. Both sides of Beauty and the Beat led off with monster hits -- "We Got the Beat" and "Our Lips are Sealed" -- which gave the band momentum for another two albums before imploding in 1985.


Jay-Z
The most demonstrative capitalist in hip-hop, Jay-Z brought tales of his hardscrabble Bed-Stuy upbringing to the masses with Reasonable Doubt in 1996, and helped launch the career of a young Kanye West with 2001's The Blueprint. Battles still rage over which is the more definitive Jay-Z album, with a faction also making noise for 2003's The Black Album as a dark horse favorite. In recent years he's made more news for his investments and marriage than his music, but for someone who once reminded us that "I'm not a businessman/I'm a business, man," that might well be a mission accomplished.


Foo Fighters
The idea that the new project of the goofy drummer from Nirvana would turn into an arena-filling, decades-spanning behemoth didn't seem feasible back in 1995, but Dave Grohl has become rock's cool uncle, an ambassador for guitar-based music, and one of the most prominent proponents of its history. His songs get played at weddings, funerals, and presidential inaugurations, and he also might serve you ribs in a parking lot. If his biggest flaw is that he doesn't seem to be able to say no to appearing in practically every rock documentary, it's also a byproduct of the fact that there are few whose enthusiasm for rock music feels so all-encompassing and wholehearted. 1997's The Colour and the Shape remains the band's best encapsulation: sweetly melodic, abrasive, contemplative, and extremely eager to please.


Todd Rundgren
The sheer length of our own Todd Rundgren biography certainly suggests the complexity of his career, which ranges from pop star to genre explorer to acclaimed producer to technological innovator. While his solo career includes standout albums like Something/Anything? and Runt, he also had his finger on the pulse of where music was headed throughout the '70s and '80s, with his name appearing on albums from the Band, Badfinger, Meat Loaf, XTC, the Psychedelic Furs, Patti Smith, and the Tubes. And he's a three-time member of the All-Starr Band, which counts for something in our book.


Kraftwerk
If you're an institution looking to celebrate the trajectory of popular music, the inclusion of electronic music pioneers Kraftwerk is a no-brainer. The German group's robot pop sound set the template for so much of the music that followed, and albums like the shimmering Autobahn and the hypnotic Trans-Europe Express paved the way for sounds that continue to resonate on pop radio today.


Charley Patton
The original king of the Delta blues, Charley Patton was both a bona fide celebrity in his time and also mysterious enough that several basic facts about his life (his birth year, his ethnicity, even the spelling of his name) remain points of contention. Musically, he incorporated a wide range of techniques to get a variety of sounds from his instrument, and was known for bringing enthusiastic showmanship to the blues world. The seven-disc box set Screamin' and Hollerin' the Blues: The Worlds of Charley Patton should satisfy the completists, while the streamlined compilation Founder of the Delta Blues can tell the tale to newcomers.


Gil Scott-Heron
Gil Scott-Heron's melding of R&B and jazz with politically and socially conscious poetry made him a crucial voice in the maturation of commercial music in the 1970s. He often teamed up with composer and producer Brian Jackson, who helped give musical shape and focus to Scott-Heron's pointed lyrics, and the two enjoyed a streak of top notch albums throughout the decade, sometimes sharing top billing (Winter in America, It's Your World) while other times Scott-Heron's name stood alone (Pieces of a Man, Small Talk at 125th and Lenox). He's now seen as a forefather of hip-hop who gave subsequent generations the green light to express themselves fearlessly.


LL Cool J
Younger generations have come to know LL Cool J as a regular Grammys host and star of nearly 300 episodes of NCIS: Los Angeles, that show their parents watch, but his place in hip-hop history looms large. One of the first artists to record for Def Jam, his mid-'80s hits "I Need a Beat," "Rock the Bells," and "I Can't Live Without My Radio" were crucial in bringing rap music into the pop mainstream. His 1990 album Mama Said Knock You Out solidified his superstar status, which offered him the opportunity to cross over into acting. We can only hope his sizzle reel includes clips from Halloween: H20 and Toys.


Billy Preston
Perhaps the truest case for a fifth Beatle, organist Billy Preston briefly reinvigorated the feuding band when he was invited to contribute to the tumultuous Let It Be sessions. He ended up performing on seven tracks, even receiving co-billing on the "Get Back" single. But it's not as if the Beatles plucked him from obscurity, he had already made a name for himself by performing with Ray Charles and had released his own gospel-tinged soul albums. After Let It Be, he was then signed to the Beatles' Apple Records, where he released Encouraging Words in 1970, the best encapsulation of his big, exuberant sound.


Randy Rhoads
One of the saddest "what if" stories in rock history, guitar wizard Randy Rhoads was only 25 when he died in a plane crash during an ill-advised joyride. His career kicked off with the first two Quiet Riot albums, but he really became a star for his dazzling neo-classical fretwork on the first two Ozzy Osbourne records, Blizzard of Ozz and Diary of a Madman. "Crazy Train" is still a riff that nearly every budding guitarist learns at some point whether they want to or not, and his wide-ranging playing on songs like "Mr. Crowley," "Over the Mountain," and "Diary of a Madman" remains iconic.

The Eddie Van Halen Prism: Tracing His Impact Through His Influences and Dis ...

From the Band to the Go-Go's, a Rundown of the Latest Streaming Rock Docs

The Eddie Van Halen Prism: Tracing His Impact Through His Influences and Dis ...

From the Band to the Go-Go's, a Rundown of the Latest Streaming Rock Docs