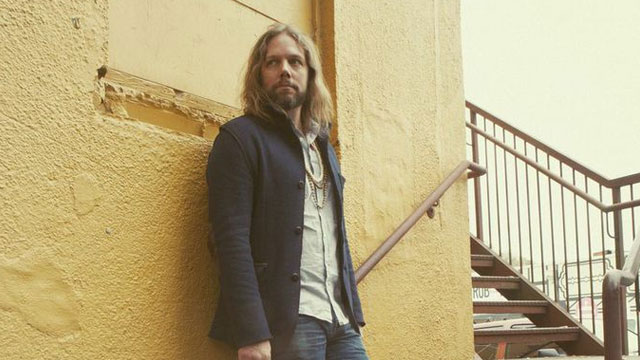 Since the Black Crowes' five-million-selling debut, 1990's Shake Your Money Maker, Rich Robinson has been consistently making music, either with his brother, Chris, or as a solo artist. His new solo album, The Ceaseless Sight, is out today, and we have the premiere for "One Road Hill," the first single. We also called up Rich to talk about the misguided idea of perfection in music, less than stellar encounters with some of his musical heroes, and defying Southern stereotypes.

AllMusic: Music has the ability to let you close your eyes and take you somewhere. Where does "One Road Hill" take you?

Rich Robinson: The way I wrote it, my son has this guitar, a Baby Taylor. He’s four, so he's small, but he likes to bang around on it, and it’s lost two strings because of the banging. So I was playing it for him, and I tuned it, I didn't even know what it was tuned to, and I started playing the song, and the song just came and reminded me of something really Appalachian. That’s why I added the lap dulcimer, it brought me to this place that reminded me of an Appalachian feel. I like to play in open tunings, and this kind of encapsulated that for me, and it was really cool. That’s what it sparks for me. There’s other songs, there’s a Furry Lewis song called “Falling Down Blues,” and it just reminds me of a field in August or something, it just puts you in this really pastoral setting, which is unbelievable. It’s amazing that music can do that. It’s amazing that it can just take you there so quickly. Smells are really strong indicators, if you walk into a room and something hits you, you’re where you were when you first smelled that, or when you hear a song and it takes you to that place, it transports you.

AllMusic: This is your third solo album, and there have been some great third solo albums, like Rocket to Russia or After the Gold Rush. Do you think about albums from bands you like in chronological order?

RR: I don’t think about music chronologically, especially older records, I don’t know where they really fall in chronological order. But After the Gold Rush is a pretty damn good record. What I hear was that when he turned it in, the record label said, “This was horrible,” it was right after Harvest, and they were like, “Where are the hits, this thing sucks.” That’s always funny, it shows how in touch the record companies really are, or were, but probably are now, more than ever. He’s still valid and still makes great records. That’s just someone where it’s like, “Wow,” just to look into somebody who’s still making great records. I remember when Greendale came out, I thought how cool that was, it was such a cool thing to see. We got to do a European tour with him and Crazy Horse, and Bob Dylan came to one of the shows, which was amazing, I was standing on the side of the stage with Bob watching Neil Young, and you can’t think of a cooler scenario.

AllMusic: When you think about his longevity and the things he's seen in his career, rock and roll was still fairly new when he was first getting started.

RR: Absolutely. It changes so quickly and so drastically now because of the landscape. What normally would take decades to shift, because of the exponential growth in technology and the effect it has on us, in society, it’s eating itself every week, so there’s a whole new landscape every couple of months, it seems like.

AllMusic: Do you have a couple of weird electronic albums in you? Is that phase coming?

RR: I don’t know, I hope not. I don’t think so. I write music that moves me and makes me feel a certain way, it could be a chord, it could be a sound, it could be anything, whatever it is that inspires me, then I go from there. That’s how I've always worked. There are things where your perspective shifts, your tastes shift, I just want to make records that move me, and that’s really all you can make records for, really. It’s your expression, and if they’re authentic, then it’s for you. If you’re trying to write something for other people, I think it’s best to be really trite, which I think a lot of popular music is today, or it can just be really kind of shitty and not very good.

AllMusic: What helps you decide that a song is for a solo album and not the Black Crowes?

RR: Every record is different and every process is different. When I’m writing something lately, I know I’m writing for me. We haven’t made a record in a while. You get into these obligatory arguments of Chris wanting to sound more like the Grateful Dead and me not, kind of going back and forth, pushing and pulling our musical tastes, and so when I’m able to do these, it’s definitely more like, “Hey, this is the direction I want to go, this is where we’re going,” so it’s kind of cool in that sense, it’s more peaceful, and there’s a lot less resistance in a situation like that.

AllMusic: What's a song that you think is perfect, where everything comes together just right?

RR: I try not to think about perfect, because it’s the flaws that I like. I think we’re too focused on trying to obtain this perfection, and the closer we get, the more it sucks. We take all of the humanity out of these songs, and there are so many bands now that don’t even record their songs in studios, they play a verse and the producer will duplicate the best chorus five times and will do all these things so it’s perfectly in time, but it’s not perfectly in time. The way humans interact with songs, there’s a push and a pull. If the chorus is coming up and the prechorus is speeding up, it creates excitement, and then you bring it back down for the verse. Maybe the verse and chorus are slower, but the bridge is explosive and it speeds up. All of my favorite records had imperfections like that, or what people view as imperfections. We were talking about Neil Young, and no one sounds like Neil, no one sings like Neil, no one plays guitar like Neil. If you try to put him on American Idol, they’d probably laugh him off the stage. That’s why he’s amazing. A lot of the things people hate about it are the things I love about it. Can you imagine Dylan on American Idol, with what people today think is important?

AllMusic: Do you think there's a record you've heard more times than any other?

RR: I get asked a lot about coming from the South and what that means, and there was a whitewash in the South of, "You’re from the South, you like Skynyrd, you like the Outlaws and Allman Brothers,” but we grew up liking R.E.M., we grew up liking Let’s Active and the dB's and all these underground alternative bands. I remember when R.E.M. first came out and we heard "Radio Free Europe," there was a huge contingent of people in the South who, when Murmur came out, when "Radio Free Europe" was on the radio, it really meant something to us. It was like, "Holy shit, what is this, this is the craziest thing I've ever heard." So for three years we just listened to Murmur over and over, all the R.E.M. records, but especially Murmur.

When we were kids, my dad loved Sly & the Family Stone, Joe Cocker, he loved Irish folk music, Bob Dylan, Crosby, Stills & Nash, we grew up listening to all that, that was our bed. But when you create your own musical taste, R.E.M. came into play, we went through that, and we loved punk rock, we loved alternative, we loved the Replacements, we loved Rain Parade and all of these bands that were on the east coast, we loved X and Black Flag, but we kind of went through that phase and got back into the bed we were brought up on. Another one of those records for me was Exile on Main St. I've heard that record more than any record, hands down.

AllMusic: Once a band gets popular they often get a chance to meet some of their musical heroes. Did you have any encounters like that early on?

RR: Sometimes it doesn't necessarily mean that the people you respect are cool people. I remember when I was 15 or 16, we had played a few shows, and not to keep belaboring R.E.M., but we were way into R.E.M. at the time, and Pete Buck comes walking into our soundcheck, our friend who knew him had asked him to come by. He came walking in and I went up to him and I go, “Hey man, what did you think?” and he goes, “You were out of tune.” I was like, “Oh, thanks, that was nice.”

Chris met Gregg Allman one time when we were first starting, we were doing MTV Unplugged, it was after Shake Your Money Maker had just come out, and MTV had just started doing Unplugged. So we were on there with the Allmans, and Warren liked our record, so he goes, “Hey man, want to meet Gregg?” and Chris was like, “Yeah, that would be cool,” and Warren took him into the dressing room, and Gregg was busy doing something and Warren goes, “Hey Gregg, this is Chris Robinson, he’s in that band, Black Crowes, that I told you about, he’s got a great voice,” and Gregg goes, “I don’t give a fuck!” and just kept on walking. And we thought it was funny, we all laughed.

Order 'The Ceaseless Sight' from The End Records or on iTunes.