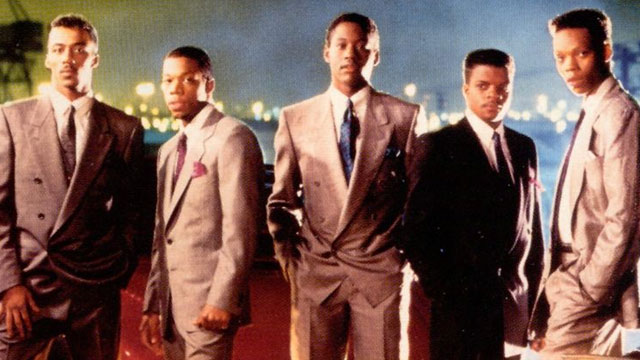 Keith Sweat's Make It Last Forever, sparked by the Teddy Riley co-production "I Want Her" and released in November 1987, rolled throughout '88 and eventually placed a total of four singles within the Top Ten of Billboard's Hot Black Singles chart. Early '88 brought "Nite and Day," the thick-bottomed ballad debut from rapper-turned-singer Al B. Sure! and close associate Kyle West. In Effect Mode, the duo's subsequent album, involved a minor contribution from Riley. Late May and early June brought a streak of excellence from the genre's most ingenious architects. In consecutive weeks, the first singles from Guy's self-titled album ("Groove Me"; Riley), Bobby Brown's Don't Be Cruel ("Don't Be Cruel"; L.A. & Babyface), and New Edition's Heart Break ("If It Isn't Love"; Jimmy Jam & Terry Lewis) debuted on Hot Black Singles. Riley, founding member and guiding force of Guy, had nothing to do with the New Edition release, but his unmistakable flavor was shot through "My Prerogative," the second single from Brown's album.

That October, journalist Barry Michael Cooper termed Riley's sound—slick and flashy, with beats almost as hard anything handled by the Bomb Squad—in a brilliant Village Voice cover story, Teddy Riley's New Jack Swing: Harlem Gangsters Raise a Genius. (Cooper was later behind either the writing or screenplays of New Jack City, Sugar Hill, and Above the Rim.) New jack swing, without objection from Cooper, was eventually used to classify the majority of contemporary R&B as part of the parent genre's evolution. Riley's penthouse-and-pavement sound was pervasive to an arguably damaging extent. The innovator either produced or remixed tracks for dozens of high-profile artists within and well outside his genre, including Boy George and Blondie. Countless latecomers and veteran artists either adapted or attempted to shamelessly replicate. Efforts to jack the new jack king were sometimes passable, frequently dismal.

Just beneath the 40, A-Z: Anita Baker's "Just Because," Cliff Branch's "Don't Give Up (On Love)," Bobby Brown's "Roni," By All Means' "I'm the One Who Loves You," Cameo's "Skin I'm In," Chapter 8's "Give Me a Chance," Club Nouveau's "Heavy on My Mind," the Deele's "Shoot 'em Up Movies," Déjà's "That's Where You'll Find Me," Full Force's "Your Love Is So Def," Guy's "'Round and 'Round," Daryl Hall/John Oates' "Everything Your Heart Desires," Kiara's "The Best of Me" and "This Time," Loose Ends' "Watching You," Mac Band's "Roses Are Red," Teddy Pendergrass' 'Joy," Prince's "Glam Slam" and "I Wish U Heaven," Sade's "Turn My Back on You," Scritti Politti's "Boom! There She Was," Surface's "I Missed," Gary Taylor's "Tease Me," Theresa's "What Cha Gonna Do," Today's "Him or Me," Tony! Toni! Toné!'s "Baby Doll," Jody Watley's "Most of All," Karyn White's "Superwoman," James D-Train Williams' "In Your Eyes," and maybe Stevie Wonder's "My Eyes Don't Cry." Special honorable mention goes to Womack & Womack's "Teardrops," a number one or Top Ten hit in several countries that, due to some shenanigans, didn't chart in the U.S. Had it done so, it would be in the second spot above.