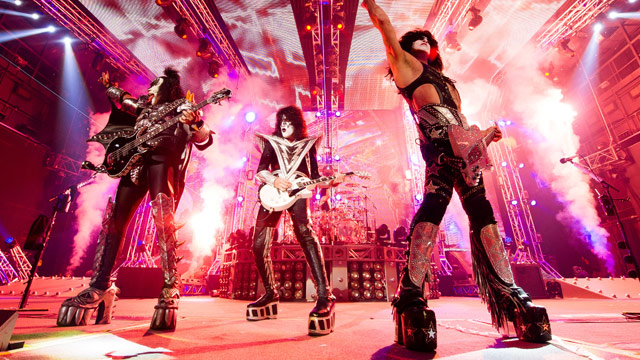 Since 1973, Paul Stanley and Kiss have been a constant on the rock and roll landscape. After countless recitations of the band's classic stage bits, from fire-breathing to flying on wires to guitar-smashing to blood-spitting and even playing a few songs in between, Kiss made it into the Rock and Roll Hall of Fame in 2014, after much harrumphing from the rock establishment. After the induction, the band took to the road for a celebratory run of shows, playing a set that leaned primarily on albums like Destroyer and Creatures of the Night, which was recorded for the new live collection, Kiss Rocks Vegas, due out on August 26.

We caught up with the Starchild while on the road in Springfield, Illinois, to talk about guitar-smashing, avoiding swearing, if seeing items from rock history in a museum has any impact for him, and the joy of sharing music with his children.

AllMusic: The new DVD opens with the band making a grand entrance while playing "Detroit Rock City," and when the camera pans to the crowd, it's a sea of people holding up phones. Does that bother you during a show?

Paul Stanley: I’m not one to tell people what they should be doing, but I think that part of an experience is actually being present, and hopefully you get the picture you want or the moment that you want, and then immerse yourself in the moment. I think that it’s strange to be living in a time when six people can be at a table at a restaurant, and none of them are talking to each other, but they’re all talking to somebody else. That’s certainly evident, although I must say that once that moment passes, I believe that 98 percent of those phones go down. If people truly want to be a part of this big tribal powwow, then they certainly put their cell phones away. I’m not distracted by them, and at the beginning of the show, sure, people are waiting for something explosive, and once they capture that, they’re there with us, and that’s fine.

AllMusic: Since starting Kiss, what is the longest you've gone without touching a guitar?

Stanley: I’m sure it’s been months. I think it’s healthy, at least in my case, to put something down and do something else. There are people who play every day or paint every day, but I’m not somebody who wants to submerge myself. I like to immerse myself in things when I’m doing them, but the idea of living for something, I’m not really a fan of that. I think that taking a break usually brings something extra to whatever you’re doing when you go back to it.

AllMusic: Are you one to noodle around while you're watching TV or do you only play when you need to?

Stanley: Most of the time now it’s for a purpose. I’m pretty good at this point, and if I need a break, I take it without thinking about it. I don’t want to look at music or art or anything as a chore, I got into music to avoid that. I got into playing and being in a band so I didn’t have to have a regimented schedule, that never appealed to me in any way, and if that had become part of music for me, I would have quit it.

AllMusic: At the end of the DVD, you smash your guitar, which you've done for decades now. The first time you did it, was it spontaneous?

Stanley: I’m not quite sure when I started doing it, but I do know that I thought, “Wouldn’t it be cool to smash a guitar?” I grew up lucky enough to have seen the Who in ’68, I saw Jimi Hendrix twice, and all these people, I saw them play for under 2,500 people, Zeppelin, Derek & the Dominos, Humble Pie, I saw all that. And beyond the music, the theatricality and drama of what some of them were doing was something that really appealed to me, and I wanted Kiss to have. The idea of almost ritualistically smashing a guitar is something so cool and touches a nerve in so many people that it seemed like a great way to put a period or to dot the I or cross the T at the end of a show, that this is finite, that this is over, it’s the climax. Once I did it, I did it the next night, and I believe it’s probably been a good 30 years now.

AllMusic: The DVD is from when the band was taking a bit of a victory lap after the Rock and Roll Hall of Fame induction. When you see items from rock history in a museum, do you get any kind of special thrill out of it?

Stanley: I believe that a lot of the clothing that we imagine to look a certain way is disappointing in person -- photos and distance make things appear much greater than they are. So I’ve found that for the most part, seeing a display with somebody’s clothes is a letdown, they either look small or they look cheesy, but that’s not the case with Kiss. I certainly find some magic in seeing instruments, in seeing guitars or drums, not because they look any different, but because they were the messenger, they were the conduit between an artist and an audience, so that is much more palpable to me than seeing a jacket or a pair of shoes.

AllMusic: When going through the Kiss catalog, obviously the band has a lot of sexual and suggestive lyrics, but you've never really been especially profane onstage or on record. Did you know from the start that you didn't want to be explicit in that way?

Stanley: I went through a very brief period of cursing onstage, and I found it ugly and I also thought it was a cheap way to get a response. My heroes didn’t do it, the bands I looked up to didn’t do it, and it’s kind of a juvenile way for somebody to get a thrill or a response of out of an audience, and I just found that it’s not part of your craft. I think that addressing and taking an audience along and being the emcee, the cheerleader, the preacher, whatever it is, is much more of a skill and a craft when you eliminate the profanity. Especially when I see people my age or of my generation up there cursing, I just think it’s ugly, and it’s usually disingenuous. When those people leave the stage, they don’t talk like that, they don’t curse. It makes me wince. In many factors in life, I do believe you lead by example, and I don’t want to be known for that kind of language, and I don’t want somebody else to do it because they saw me do it. I find it juvenile or offensive, and I don’t want to set an example for somebody that is not accurate.

AllMusic: How much fun has it been to introduce your kids to music as they've grown up?

Stanley: Having children is a second chance to have the childhood you didn’t have, I think you get a chance to heal and to experience things in a different way than you did, and to share things that were important to you. In the case of my oldest, we shared so much music together, and his taste is so varied and so much like mine that it’s a thrill that he knows everything from the Temptations to Robert Johnson to Blind Boy Fuller to Hendrix to the Beatles and Eric Andersen and Joni Mitchell, it’s a thrill to share that with him, and with my younger ones, the start is them seeing that dad does what he loves doing, and that not only am I happy, but the people who I do it for are happy. My kids were on tour with me until a few days ago, and to see the joy on their faces, when they experience not only the concert but the crowd, and to see that I’m doing something I love, once again, you lead by example. If I can do it, you can do it. It doesn’t mean you have to have the same passion as me, but you need to find your passion.

AllMusic: You've mentioned setting a good example a few times now. When did you realize that was a value you wanted to take to heart?

Stanley: As I got older, I realized that one of the most gratifying things in life is what you give others, and the impression you make on others and how you help others to be the best they can be. It’s interesting when you reach a point that you truly begin to realize that giving is the greatest gift, and watching what you can impact, so I get tremendous satisfaction and a tremendous sense of peace knowing that I’m always striving to be a better person, and I think that’s the best way we can lead by example. The world is changed by individuals, and by individuals who group together, but it has to start with each person. So that may sound a bit heady or a bit corny, but it’s what I believe and have always believed, and now I can verbalize it and utilize it better than before. From my experience, what we give others and how we see it impact them has a huge impact on us.

Visit AllMusic for new album reviews every week, in-depth bios and discographies of your favorite bands, and interviews with the people behind the music.