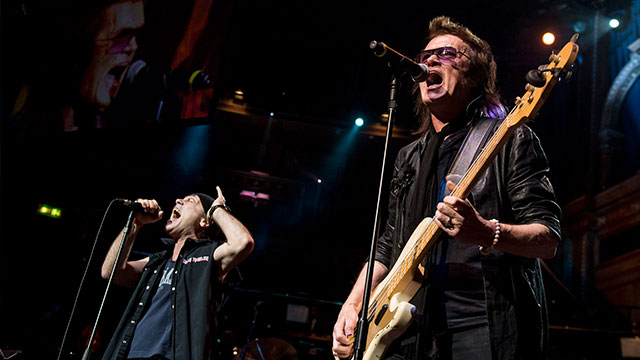 When Jon Lord passed away in 2012, he left behind a legacy as one of the cornerstones of hard rock music. His organ playing was fundamental to the sound of Deep Purple, and his intimate knowledge of music theory and composition helped his band expand beyond the standard confines of rock. In commemoration of Lord, the 2012 incarnation of the annual Sunflower Jam charity concert at the Royal Albert Hall became a Lord-centric night, featuring songs from early his career, multiple lineups of Deep Purple. and numerous guest performances. The performances are being released on various home media formats as Celebrating Jon Lord, with proceeds going to causes such as research on pancreatic cancer, the disease that led to Lord's death.

We talked with Deep Purple drummer Ian Paice—his wife, Jacky, founded the Sunflower Jam—about his early days with Jon Lord, the musical gifts he brought to the band, and his memories about the night of the tribute concert. We also are excited to premiere the live video for the performance of Deep Purple's "Burn," featuring Iron Maiden's Bruce Dickinson on vocals, along with Deep Purple Mk III singer and bassist Glenn Hughes, and Yes keyboard player Rick Wakeman.

AllMusic: Can you remember meeting Jon Lord for the first time?

Ian Paice: The first time I actually met Jon, I remembered it but there’s no way he would have. The band I was in at the time, we opened for Jon’s band, which was called the Artwoods, at the Marquee Club in London. Although they never really made it big internationally, in Europe and Britain they were quite well known, and so we knew all of them as a band. The first time I saw Jon, I remember this incredibly slim, tall, rock and roll guy in front of you, he just looked right, he was very impressive, and when he played, it was obvious that he was very, very good at what he did.

I enjoyed the night and thought no more about it other than you get to see really good people play as you get around the country, and then when the Deep Purple formation started and I walked into the room and saw Jon was on keyboards, it all came flooding back to me, remembering how good he was and what a possibility it was with musicians of that caliber, that whatever came out of this audition session could only be good for me. He was always very supportive, always very kind. I was pretty nervous going into this, and he took a few minutes to say, “Look, none of us know what’s going on, relax, have fun, and when you hear something, react to it, do something.” So the next half hour, which was my audition, basically, it just flew by, and we had a good time. I always remembered it, obviously.

AllMusic: We're debuting the performance video for "Burn," what stands out about that particular track with Jon and the band?

Paice: That track is mad, for a drummer, it’s so manic, and I have to trust everybody else to lock into me. I’m doing so much within it that any slip in tempo or any fluff I might make, I have to pray they pick up on it and make it sound smooth, especially when we’re recording. I think we did three takes. The first take was a mess, the second take became the master, and the third take, I tried to improve it and that became a mess again. That was a moment in time where it all came together, and it came together for all of us. Everything I did was on the edge of chaos. Jon and the other guys just really had to be aware of everything I was playing, because those are things that you can’t fix afterwards, they have to be captured at that moment, and that takes some good guys to lock into that craziness and make it work.

AllMusic: When people write about Jon, the phrase "classically-trained" is almost always used. But that didn't mean he was stuffy.

Paice: Most of the really good keyboard players that you come across in rock and roll start out being classically trained, they have the talent from childhood, and whether they choose to play piano by choice or by the will of their mother or father isn't the point, if they've got the talent, they’re generally taught to play the piano correctly, in an orthodox style, which means they get in tune with the classics. So the good guys generally have a very similar training. Rick Wakeman has a great knowledge of the classics, and Don Airey, who’s now in Jon’s seat with Purple, that’s just the way they are.

Jon didn't really put music into compartments, and I think that’s pretty obvious from the way he tried to put different sorts of music together, he saw no reason why a rock and roll band couldn't play with an orchestra, to the point that he created a piece to allow this to happen. Like most good musicians, you may have an expertise in one style of music, but really, you can play anything, and that’s the way Jon did it and the way Jon saw it, that there’s no reason why two things that haven’t met before shouldn't meet and live in harmony.

AllMusic: Where did he fit into the idea of a standard rhythm section?

Paice: When you’re in a small outfit like a rock and roll band, you might have three, four or five people, and at some point during each piece of music, each one of you is part of the rhythm section, whether the guitarist is taking a back seat and chugging along, obviously drums and bass must lock together, but Jon played very rhythmic organ as well, so when he wasn't being called upon to do a solo or a written part, he’d always be fitting in little rhythmic patterns, and he was very good at that. When we did the “Hush” track, that was such an organ rhythmic piece, it was a samba, but the organ made it bubble along all the way through the track.

AllMusic: When would Jon usually get involved in the writing phase?

Paice: Generally the riffs came from Ritchie or Roger [Glover], that’s what guitars do, they’re very good for constructing riffs. When you have a fairly obvious riff come along, Jon would come up with, “Why don’t we change this chord, change this inversion, play this inversion, turn this one into a minor,” and he’d take a musical look at it and say, “Hey, we can make it better, we can make it less obvious and more impressive when people hear it.” His was the cream on top of the cake.

AllMusic: Would the guys writing the riffs get territorial about their riffs and bristle at some of Jon's ideas?

Paice: Nine times out of 10, he was right. It became pretty much de facto that if Jon suggested something, it was always given a listen. Occasionally it wouldn't be with the idea of the riff and you’d say, “OK, thanks,” and move on, but usually he had a very, very productive insight into those sorts of things.

AllMusic: Rick Wakeman performed at the tribute concert, what was their relationship?

Paice: Rick and Jon never met until about two or three years ago, at my wife’s charity event, which this concert was under the auspices of in this performance. They got to meet in that venue, and they really found they liked each other, had the same sense of humor, the same musical loves, and became really close friends. Getting Rick to come back to do this was no hardship at all, he was too happy to help out. There were even plans between Jon and Rick to do a duo keyboard album together, but it never became possible.

What people forget is all the bands with great keyboard players coming along at similar times, everyone was working all the time, so the chances for having any down time and socializing with people was almost impossible. When we’d hit the road for eight or nine months of the year and then go into the studio, the last thing you want to do is meet another musician and talk about music. When life moved on a bit and there was more time, when they meet each other, they find out they have so much in common.

AllMusic: Bruce Dickinson from Iron Maiden sang with the band. What was it like to have him onstage?

Paice: Bruce has been a friend for a few years now, and he’s a really great performer, a really great vocalist, and when he’s onstage, he’s a live wire. You get caught up in his exuberance about the whole thing, and he did a great job with Glenn on it. It’s a fabulous piece of rock and roll mayhem for five minutes.

AllMusic: You can think you know someone, and then you go on tour and spend a lot of time in a bubble with them and they can turn out to be different than you thought. Did anything about Jon surprise you once Deep Purple went on the road?

Paice: When you are in a very small circle of people, the nucleus of a rock band, that’s all you've got, that’s the only social circle, the only trustworthy group you've got, you rely on each other, you work together, you play together. You get to know each other very, very well. Not all bands, like marriages, are made in heaven. Sometimes there are characters that don’t get on well, it can be difficult to deal with someone else’s view of the world, but Jon wasn't one of those. He was quite a gentle man, wrapped up in music, loved literature, loved a good meal, good wine. He was quite a mellow character, really. If he had one vice, it was stubbornness. Once he got his teeth into something, right or wrong, he’d hang on until the very, very end.

AllMusic: Do you mean musically or in general?

Paice: Anything. It was just in his nature. But in the scheme of the things that happen on the road, you can deal with that, that’s all right.

AllMusic: Did this performance help bring a sense of closure to Jon's passing?

Paice: I think for us who were very close to him, it was a necessary thing to do. Above and beyond what we felt about it, I think for a lot of Jon’s fans around the world, those who were fortunate enough to be there, it was their way of saying goodbye. With the DVD, I think it’s a way of letting the people who couldn't get there enjoy an amazing night, dedicated to the memory of the man. It’s a very classy production. And hopefully the sales of this will lead to a surplus of money which can go towards trying to beat the dreadful cancer that took Jon from us. I always say, “People, don’t download it or steal it, buy it, because the money you put into it could save your own life.”

Celebrating Jon Lord can be pre-ordered via Amazon.