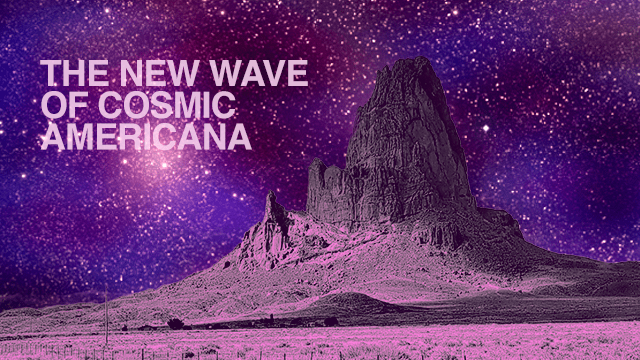 In December 2022, New York "ambient country" band SUSS released a self-titled double LP. Not unlike their previous efforts, SUSS has already enjoyed its share of critical superlatives and placements on prominent year-end lists. To their growing cult following, the trio — Bob Holmes, Pat Irwin and Jonathan Gregg — represent the vanguard of a surging underground subculture that explores the notion of "Cosmic Americana" from a variety of creative angles.

The four sidelong EPs that make up SUSS rely heavily on instruments broadly associated with country music: acoustic guitar, mandolin, and especially the pedal steel. Those sonic textures, however, are applied here to compositions which pull equally from the dreamy ambient soundscapes of Brian Eno, the "Wild West"-exoticizing soundtracks of Ennio Morricone, the ecstatic jazz of Pharoah Sanders, the patient minimalism of Pauline Oliveros, and the noisy post-rock washes of Labradford. In other words: Toto, I've a feeling we're not in Nashville anymore.

SUSS also serves as a lovely and fitting tribute to founding member Gary Leib, who passed away in 2021 shortly after the recording of Night Suite, the first EP included on the album. This album contains both Leib's last recordings with the band and the first the surviving members made after making the difficult decision to carry on as a trio.

SUSS may be leaders in the current field of Cosmic Americana, but they're far from alone. There has been a growing interest over the last several years in combining the sonic earmarks of country and folk music with the more spacious structures of ambient music, psychedelia, spiritual jazz, minimalism, and new age. The notion of psychedelicizing country and folk music is hardly new: the Flying Burrito Brothers, Sandy Bull, the Byrds, and the New Riders of the Purple Sage all started that work almost six decades ago, to say nothing of the Grateful Dead, who serve as a nigh-universal touchstone among this current crop of lysergically-minded pickers and grinners. Still, the best work of recent years manages to voyage into vistas previously untold.

What follows is a look at the tip of the modern Cosmic Americana iceberg, to help new listeners get on their way. It won't make you an instant aficionado, but hopefully it will provide good footing as you begin your journey.

Marisa Anderson and William Tyler are both established cult favorites, each trading in a patient pastoralism that uncannily evokes the wide open spaces of their home regions (Oregon for Anderson, Tennessee for Tyler). Following stints playing with Lambchop and Silver Jews, Tyler's 2016 solo effort Modern Country found his knack for both expansiveness and indelible melody in full flower; meanwhile, Anderson albums like 2013's Traditional and Public Domain Songs showcase both a love for songs buried deep in the American subconscious (think 'Will the Circle Be Unbroken') and a willingness to stretch those traditional forms into brambly new spaces informed by free jazz and other points beyond.

Though those approaches sound somewhat disparate written down, Anderson and Tyler are very sensitive players and listeners, which serves to make this collaboration sound not just inevitable, but also finer than the sum of its parts. Throughout Lost Futures, the guitarists' lines snake around each other with great care; even the neo-minimalist grind of 'Something Will Come', a tightly-wound throb that brings to mind Black Sabbath playing Philip Glass, is imbued with a degree of stately grace. In its relatively conventional sections, though, Lost Futures sings with an aching beauty that's hard not to love.

Oakland, CA-based composer Chuck Johnson doesn't have a very down-home backstory: he studied at Mills College, several of his earlier works are largely electronic, and he is an avid proponent of the Deep Listening philosophy and techniques associated with the late composer and teacher Pauline Oliveros. On Balsams, however, Johnson uses one of the instruments most closely associated with American country music, pedal steel, as a vector for that deep listening. The spare and lovely work here hovers like an arid desert haze, a languid American Southwest of the mind somewhere between Paris, Texas and a Zen meditation center.

Ripley Johnson (also of renowned psych groups Moon Duo and Wooden Shjips) spent his first couple releases under the Rose City Band moniker as a solo project, with a sound lodged cozily between California country-rock and the withdrawn languorousness of mid-period Yo La Tengo. With Earth Trip, Johnson expands a bit on the Cosmic Country part of the equation, inviting some leading local psychedelicists in his adopted home of Portland, Oregon for the sessions.

Perhaps the most noticeable addition on Earth Trip is that of prolific pedal steel player Barry Walker Jr. (he of a few stunning solo records, as well as contributions to recent works by North Americans, the Lavender Flu, Mouth Painter, and several other top notch units). Walker's embellishments help expand the sound, while subtle, acid-trails mixing tweaks courtesy of Cooper Crain (of Bitchin' Bajas) lend a gauzy magic to Johnson's laid-back melodies and fried interstellar choogle.

A young and restlessly inventive solo guitarist from northern Virginia, Yasmin Williams generally doesn't adorn her music with trippy electronic effects like some of the other performers listed here. Instead, Williams' music journeys into mind-expanding territory by sheer force of her originality.

Her mastery of deft and expressive fingerstyle guitar would be impressive enough, but on Urban Driftwood, Williams also incorporates percussive effects, lap-tapping (a method where one sets the guitar on their lap and plays the fretboard somewhat like a keyboard, alternating between tapping and fingerpicking), and even playing a kalimba in tandem with the guitar. She even switches from guitar to kora with aplomb. Having previously played guitar in a Go-go band with her brother, Williams' complex melodies are often more informed by modern R&B and jazz than anything from the (unfortunately named) American Primitive canon; still, fans of Fahey, Basho, et al. will find plenty to enjoy here.

New York duo Elkhorn — electric guitarist Drew Gardner and twelve-string acoustic player Jesse Sheppard — use traditional folk forms as a launchpad for extended, improv-heavy workouts. Where some of their peers tend to be psychedelic in the languid and dreamy sense, Gardner and Sheppard are willing to venture into gnarlier places; it's never a bad trip, mind you, but it might just be a touch more intense at times.

That said, The Storm Sessions is both one of the band's loveliest works and one of their most exploratory. Snowed in with fellow traveler Turner WIlliams Jr. (A.K.A. Ramble Tamble) on the night of a show scheduled to pay tribute to a departed friend, musician Mark Fosson, the ad hoc trio instead set about recording two epic improvisations, with Williams on electric bouzouki on one side and shahi baaja on the other. The resulting music is wandering without sounding unfocused, elegiac without being ponderous; if it's not their most concise or immediately accessible album, it warrants mention here because of how it thrillingly shows the places this music can go.

The pedal steel's ringing, mournful glissandi, long a staple of country music, has proven a central instrument of the ambient country scene. This makes sense, given how well the instrument lends itself to heavy reverb and delay, and given the moments of trippy transcendence Jerry Garcia managed on the instrument during early stints with New Riders of the Purple Sage and David Crosby (if you're looking for a way to fruitlessly waste the remainder of your days, just try to find an ambient country musician who doesn't rave about Garcia's pedal steel part on the early Crosby track 'Laughing').

In-demand Nashville pedal steel player and Third Man Records recording artist Luke Schneider assembled this compilation (the latest in the Tompkins Square label's excellent Imaginational Anthem series) of current artists pushing the instrument most aggressively in new directions. Matching veterans like Susan Alcorn with newcomers like Spencer Cullum (as well as including a track by the aforementioned Barry Walker), it's a varied, consistently engaging listen, with moments both wild and achingly beautiful. Best of all, it doubles as a checklist of excellent artists to explore deeper.