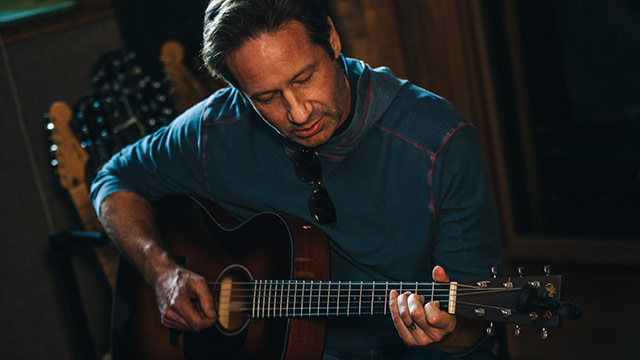 Today marks the release of Every Third Thought, the second album from actor and musician David Duchovny. Recorded a year ago, Duchovny held off on releasing the LP until he had a proper break from his schedule, which most recently included another season of the rebooted The X-Files. a guest appearance on David Lynch's new season of Twin Peaks, and writing his third novel.

Duchovny began pursuing music in earnest only a few years ago, releasing Hell or Highwater in 2015. To hear him tell it, it's almost as if he's enjoying a second adolescence through music, working up cover songs with his band that suit wherever they're playing and making his guitar player roll his eyes by digging out a talk box, the cheesiness of which he happily acknowledges. But his songs are anything but childish, populated by the concerns of and characters conjured up by a man in his fifties. Duchovny shared stories about putting together the soundtracks for his film and television work, gaining confidence in his vocals, and how it feels when Marilyn Manson loves one of your characters.

AllMusic: Happy release day. What were your expectations for the sound going in versus how it turned out in the end?

David Duchovny: The first one was mostly walking into a dark room and trying to find the door on the other side of the room. It was a completely new experience, and since I had that experience going into this, I was able to be way more collaborative and work on songs with other people, where on the first one, I had completed the songs by the time I tackled them. This time I could get a song three-quarters of the way through and we’d work on it, and the other guys would bring in sounds that I never would have brought to it, and I love that, I really trust them. And I bring a slightly older generational taste to the sound, I grew up with late 60s, early 70s sounds, and these other guys have much more contemporary ideas.

I’ll fight with my guitarist; I just bought a talk box, like Frampton used, and everyone thinks it’s so cheesy, but I love that sound, there’s nothing wrong with that sound. So we’re going to hopefully bust that out. I like to bring back, even if it’s considered cheesy, those sounds from the 70s, and I lay them on the boys and they’re like, “Uh…let’s see what we can do with that.”

AllMusic: Are you more stressed when it's time to record a vocal take or when you film a scene?

Duchovny: On the first album, I was stressed recording vocal takes, but I don’t think I was this time. You know you’ll stay there until you get something you like, and I’ll just keep doing it. I don’t have this idea that my voice is going to be note-perfect every time so I’ll be embarrassed when I fuck up a certain passage or a song, so I think I got over that. And performing live, at first there was that fear of not hitting notes, but that’s going to happen. You’re going to hit some clunkers, that’s live performance. I don’t really have the nerves about that normally. We had a few performances in the past few weeks where you’re on a morning show, so you get up at five to sing at seven in the morning, and I find that to be a little nerve-racking.

AllMusic: Lyrically, were you more interested in telling stories or sharing feelings and ideas?

Duchovny: I was interested in what I was writing about when I was writing it, but there was no overarching theme, just wherever I was that day when I was writing. It’s not like a theme album or a concept album, and I think of each song, as I look back on it, as a character, and I do think about the lyrics of each song as being sung by a different person, being sung by me as that character that day, the guy who wrote that song on that day, who I no longer am.

AllMusic: Like the character in "Last First Time," is he saying what he's saying because he's burned out on the rigmarole of relationships or because he's just that optimistic about the one he's about to start?

Duchovny: I think it’s both. That song, to me, was as romantic as a 50-year-old guy could get. I was at a wedding recently, the people were my age, and it was like Disney, they were talking like it was Disney stuff, and that was weird to me. You’ve got to have a different version of romance when you get to a certain age.

AllMusic: Marilyn Manson was such a huge Californication fan that he used to use your character's name, Hank Moody, as an alias. How was it when he eventually guested on the show?

Duchovny: I was aware he was a fan, because he’d been in contact with Tom Kapanos, the showrunner, and Tom is a big music fan and was always so overjoyed when people from the music industry would reach out. Moody was Tom’s fantasy idea of a world in which writers were treated like rock stars, that was Moody. Him being a writer, he was like, “Wouldn’t it be a great world if women thought writers were attractive the way they think rock stars are attractive?” That was his idea around Californication. I knew Manson was into the show, and Tom had told me that he’d used that name as his hotel name when he’d be travelling, Hank Moody. Working with Manson was a kick, he’s obviously a unique dude and so smart, I liked being around him.

AllMusic: When you've directed movies and TV, is putting together the soundtrack something you especially enjoy?

Duchovny: I loved putting together the soundtrack for House of D, I got to use “Harmony” by Elton John, “As” by Stevie Wonder, “Funk #49” by the James Gang, an early Van Morrison tune, I got to use some great songs on that soundtrack. I think Tom and I used to always talk about finding the right Elton John song for Californication, or the Zevon songs that we got to use. I think we used “High Flying Bird,” one of my favorite old Elton John songs, which is kind of a deeper cut. I love bringing my old 45 collection in my head to bear.

AllMusic: What about the times when you don't get to make those choices, are you ever pleasantly surprised?

Duchovny: The last thing I directed was an episode of Aquarius, and they ended up using Norman Greenbaum’s “Spirit in the Sky” at the end of it, and I know it’s on a lot of soundtracks, it’s such a great sound and a great song, but I thought it was a great choice for that. I didn’t get to choose any for that show, but I thought it had a great soundtrack. They found a lot of deep cuts from the late 60s, a lot of songs I’d never heard before. Just on the X-Files that played last week, they used the John Cale song “Fear is a Man’s Best Friend,” and that was a really freaky, great song for the show.

Michael Chiklis On His Lifelong Passion For Music and His Debut Album, 'Infl ...

Joe Scarborough Is Finally Living Out His Musical Dreams

Michael Chiklis On His Lifelong Passion For Music and His Debut Album, 'Infl ...

Joe Scarborough Is Finally Living Out His Musical Dreams