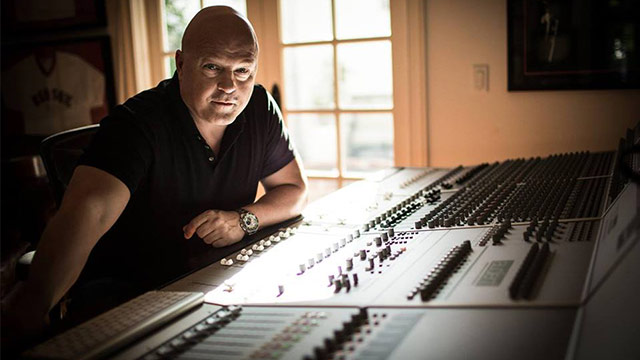 Michael Chiklis' acting has been acclaimed for decades, from The Commish in the early 90s to his current run on Gotham, and especially for his Emmy and Golden Globe-winning role as Vic Mackey on The Shield. But for a man who grew up in a musical household, playing drums since the age of seven and admiring well-rounded entertainers like Sammy Davis Jr. who could seemingly do it all, acting couldn't scratch every itch.

On September 16, Chiklis will release Influence, his first album. It's a collection of songs Chiklis wrote while traveling to various locales for film and television projects, with some local flavor bleeding into each track. He intended to call the record Sonic Postcards before the Foo Fighters beat him to the punch. The album features songs like "Come Out and Play," a zydeco-infused track written while in New Orleans, with accordion and a brass section, which Chiklis says goes well with tequila, while other songs carry regional influences from Toronto (Rush and prog), London (Queen and theatrical bombast) and Puerto Rico (Latin rock, Santana, Gipsy Kings). "Run To You," the track we're debuting here, was created following a euphoric night at a Bruce Springsteen concert, and the song bears his signature saxophones and speeding momentum.

"I know what I face with all of this, I know that there’s going to be a segment of the population that’s immediately going to dismiss it and not even listen to it based on the fact that it’s me," Chiklis said in an interview. "How dare I put out a record? But it’s incredibly satisfying to look at this CD in my hands, and no matter what anyone has to say, I’m very proud of this thing."

Michael Chiklis: This particular song is the most directly influenced by a particular band, because of the fact that I’d just seen Bruce for the first time in my life. I’d always been a fan of his, but somehow he got away from me and I never had a chance to actually see him. When I saw him, typical of the stories, he went for three and a half hours at Madison Square Garden, and I was like, “Wow, I get it.” I got back to the apartment that night with his signature sound ripping through my head, and I think there’s a bit of Southside Johnny and the Asbury Dukes in there, as well. On the next album, I’ll probably start to stretch out and come into new ground, but with the first album I had to pay homage to the music I grew up loving. That was important to me.

AllMusic: It has the saxophone, which is obviously a Springsteen hallmark, but it's also got that propulsive energy that a lot of his best songs have.

Chiklis: I always pictured it as a driving song, literally as well as figuratively, I look at it as a song to drive your car to. It does have that sort of kinetic, driving storyline. I remember one of the first albums I loved to drive a car to was Jeff Beck’s Blow By Blow, that was a great driving album. And Peter Gabriel's Security.

AllMusic: What was the tipping point when you decided it was time to make a record?

Chiklis: I worked a few years ago on a movie called Parker with J. Lo, and you have to hand it to that woman. She’s much more on the commercial tip, musically, very pop, but really phenomenal. She started as a dancer, just Jenny from the block, she's really talented, and she puts herself out there. That girl is incredible. I was working with her and watching her and just inspired by her, and I said, “You know what, I’m going to record an album, I’m going to go ahead and do this.” When you see artists being courageous, I think there’s a lot to that. That’s what we have to do.

AllMusic: Which bands did you see live the most as you were growing up?

Chiklis: I saw Queen a bunch of times, and I saw the Tubes a bunch of times. They were just a crazy, wild band. Some people equate them with some of their pop hits, but I really fell for them back in the day when they did "White Punks on Dope." They were a very theatrical band, a big band with a wall of sound and eight players. I loved Todd Rundgren, and I’d always see him in whatever way I could see him, he’s an incredible musical talent. We were also regulars at the Newport Jazz Festival, we’d go every year. And Genesis, I probably saw as much as any band I’ve ever seen, I saw them every time they came through Boston from junior high through college, Peter Gabriel was a huge influence on me.

Influence can be ordered via iTunes