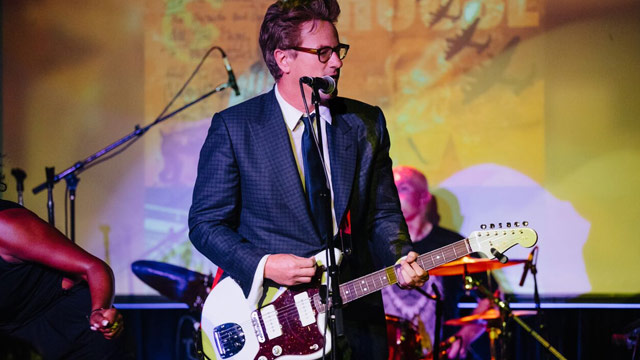 To hear him tell it, Joe Scarborough almost (but not entirely) considers his role as a television host, his early life as a lawyer, and his four terms in the United States House of Representatives as mere detours from the passion he's clung to since he was 13: getting in a room with his friends and playing music. Though he's been writing songs for most of his life, only recently -- with the encouragement of his fiancée and Morning Joe co-host Mika Brzezinski -- has he decided to make them public, with the ambitious plan to release an EP roughly every month. Mystified arrived in June, followed by this month's Welcome to the Monkey House, which features a pair of recently-penned songs about the intensity of the current moment.

With two freshly released EPs and more music on the horizon, Scarborough's enthusiasm to discuss anything other than politics was palpable when we spoke last week about growing from a Top 40-transcribing kid in upstate New York into a TV veteran who was nonetheless terrified when the red light turned on for his recent performance on The Late Show. He also knows just the right Sex Pistols song to use to upset one's parents.

AllMusic: As you've been writing these songs over the years, did you ever intend for anyone else to hear them?

Joe Scarborough: I started writing when I was 13 or 14. Through my teens and twenties I was thinking, “I’m going to do this, I’m going to be the next Beatles or U2,” the dream that so many people have when they start writing songs. But then I got into Congress and things didn’t quite work out the way I expected them to, but I kept writing these songs and recording the songs, because that’s what I love doing the most, and I had all these other side jobs all along, but songwriting and recording in my studio is something I’ve done my entire life.

I’d given up on releasing the songs and thinking that people would hear them until a couple of years ago, when I recorded 50 songs with full production, and Mika listened to them and said, “I have bad news for you, you’re going to have to release these songs and get them out there,” and I said, “I’d get killed if I did that,” and she said, “You probably will get killed, but you have to do it anyway, because it’s the most important thing in your life.” So I listened to her.

AllMusic: The number that's been thrown around is that you have around 200 songs written. Is that hyperbole?

Scarborough: I’ve actually written more than that. When I was first talking to Sony, they said, “Hey, how do you want to work this?” and I said, “I have all these songs recorded, and I’m still writing more. I want to do an EP a month,” and they said, “Yeah, sure, whatever.” And I put the first EP out, and then we got the chance to play on Colbert, and so I wrote a new song for that and called them up and said, “Hey, I want to release this,” and they said, “You just put out your first EP two weeks ago, play a song off of that,” and I said, “I think this new song will work better for TV,” and at that point they realized, “Wait a second, this guy’s serious, he’s going to do an EP every month.”

AllMusic: For a guy who's on TV most days of the week, was that Colbert performance more nerve-racking than usual?

Scarborough: Yes. I kept saying to myself, “Don’t fall over, try to keep it in the middle of the road.” That’s one of the few times in my life that I just wanted to survive, I didn’t want to spontaneously combust. I just wanted to get through it. The great thing is that everybody else in the band had a fantastic time, it was a thrill for them and a thrill for me. We were rehearsing the next day and we were like, “Can you believe what we did last night?” So when the red light turned on, I was definitely not in my comfort zone.

AllMusic: What was the role of music in your life as a kid?

Scarborough: I was pretty active in my school, and I had a number of friends, but when I got home I’d walk through the door and go into my room, close the door, and I’d put on headphones and I’d listen to music nonstop. I lived in upstate New York at the time, and while my family was watching Happy Days and Laverne & Shirley downstairs, I had my headphones on and was listening to radio stations from Chicago and Detroit, and other great radio stations up and down the east coast and in the Midwest and even some from the South. I had this massive Beatles phase, where I’d listen to Beatles albums around the clock, and on the weekends I’d sit in my room for four hours on Saturday and write down all of the Top 40 songs. I was just obsessed with it, it was my life.

I always said, if I were a little better-looking, I’d have been out with girls instead of in a basement with other guys, writing and recording music. It was a great refuge from all the things that we go through when we’re in seventh and eighth grade. Every time I’d ask a girl out and she’d say no, I’d go downstairs and write another angry song and play it with the group. It was a great escape. I was explaining to Mika a couple of weeks ago how there was just something unbelievable about music, that whatever was bothering you, whatever was frustrating you, you’d get down there and play and write and record, and whatever the problem was, it at least went away for that time and you’d go on feeling good.

AllMusic: That's probably similar to the role it plays for you today.

Scarborough: When I was younger, it was smaller problems: big kid, big problems. Instead of writing songs because I liked a girl who didn’t like me back, when I started really recording these songs was after I got divorced, and I think it was the same instinct that pulled me back in there to start recording in my home studio.

AllMusic: When it's time to write and record, are you able to put away the phone, close Twitter, and disconnect?

Scarborough: Yeah, and I have to, because if I have the phone by my side, I’d be interrupted every 15 minutes; something always blows up, someone’s always calling from the office. So I put the phone in the drawer and we start recording, and I’ll stick my head out every five or six hours and say, “Any nuclear wars? Anything blow up?” and if they say no, I go back in. It’s the only way to do it. I think because I have to be on my phone all the time, I see it as the enemy. If it’s not a text from work, it’s something on Twitter, some crazy thing just happened in the news, so I have to turn everything off and go in and play and record.

AllMusic: That uncertainty carries over into your song "Welcome to the Monkey House," especially when you're saying things like "welcome to my nightmare" and "welcome to my graveyard."

Scarborough: We’re living through some dark times. Kurt Vonnegut has a series of short stories called Welcome to the Monkey House, and it’s a lot of stories about the insanity of life in some pretty extreme situations. After the first EP, I started reading that again, because it reminded me of what we were going through in the Trump era, and I thought, “That’s a pretty great title for this song.” The first two songs were written in early July, “Welcome to the Monkey House” and “When Will You Go,” which were inspired by current events.

AllMusic: Are you a gearhead or are you happy to just plug in and play?

Scarborough: I’m not a gearhead, and I’m not an audiophile. I think if I have any serious critique of my first EP, I think it was too slick, a little too produced for my taste. I don’t obsess over it, I spent most of my life playing an American Tele through a Fender Twin Reverb, but a lot of times when I’m recording I’ll just plug straight into a direct box. I love the DI sounds, you get that distortion that you get when you’re doing something you’re not supposed to. Sometimes you get the best sound that way. I think that’s what I did on Mystified, it’s just a direct in.

AllMusic: So idea of spending weeks on pre-production doesn't appeal to you.

Scarborough: Have you seen the Eagles documentary? Whether you like the Eagles or not, it’s a great documentary. My favorite part of it is Glyn Johns talking about Don Henley saying, “I need more kick drum” and so he said, “Then kick it harder.” This is one of the great producers of all time. We don’t overthink it. “Let’s spend two weeks to do the drums.” No, let’s not. I respect people who are audiophiles, but the most excited I’ve ever been listening to music is usually when something’s really rough, it sounds great. Stuff that doesn’t sound like they sat there forever, like Keith Richards, like he barely had time to tune his guitar, and that’s OK.

AllMusic: When the family was downstairs watching Happy Days and Laverne & Shirley, did you ever crank up your music to drive them nuts?

Scarborough: I always got to things later -- like when the Sex Pistols were popular, I was too young. But if you turn “Bodies” up in your room and it gets to the bridge, I think that would disturb most parents. That may well be the greatest bridge in the history of rock and roll. You play it for people and they say, “That’s absolutely disgusting,” and you say, “Yeah, that’s the idea.” My parents knew I was a freak about music, and the only time my dad came in said, “You have to turn this down, that music is horrible” is when I belatedly got into Bruce Springsteen. It took me a long time, but by the time I had my Born to Run album and turned it up really loud, and it gets into “Jungleland,” my dad would throw open the door and say, “You just have to turn that shit down.” Other than that, I think they put up with it well.

AllMusic: Are you similarly patient with the music your kids listen to?

Scarborough: Yeah, I am. There are some bands that get on my nerves, but I have kids from nine to 28, so the radio has been on nonstop my whole life. I’ve probably heard Beyoncé and Taylor Swift about 1,000 times more than most people because of my daughters, but it’s great. I love listening to their stuff. My son and I, he’s 28, we have these debates about music and go back and forth.

AllMusic: I imagine you love those debates.

Scarborough: I do. I usually sit and listen, because he gets pretty impassioned about it. We haven’t quite broke into the Arcade Fire debate yet about their latest album, but I’m sure he’ll say it’s the greatest thing that’s ever happened in popular music, even though I don’t think the critics are saying that.

The Highs and Lows of the '80s Hard Rock Scene, As Told Through Its Music Vi ...

The Highs and Lows of the '80s Hard Rock Scene, As Told Through Its Music Vi ...