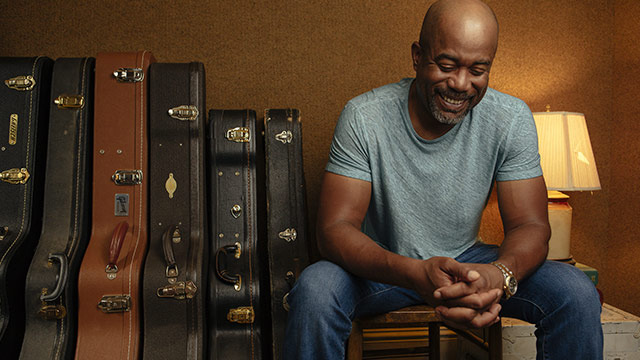 Five albums and nearly a decade into his rebirth as a country artist, former Hootie & the Blowfish frontman Darius Rucker has found his sweet spot with an easygoing, chipper take on country-pop, but isn't scared to play with some of the genre's dark underbelly on occasion, either. His latest album, When Was the Last Time, finds Rucker in a nostalgic mode, reminiscing about the past and covering a tune that was one of his favorites as a bar-hopping college kid, and his comfort with the material certainly shines through.

We spoke with Rucker about his gritty choice for a cover song, the R-rated country act he loves but wouldn't try to emulate, and flashes back to his experience collaborating with Adele, just before she became a superstar.

AllMusic: The new album has a cover of "Straight to Hell" by Drivin' n' Cryin', which has some dark lyrics. Was that what initially appealed to you about the song?

Darius Rucker: I remember when I first heard it, I thought, “This guy has lived a rough life.” The payoff of that song, the thing that really makes you feel the song, is the chorus, when he says, “I’m going straight to hell,” and that’s beautiful, a great line, but “just like my mama said.” That makes you think, man, what a life, if you hear, every day, your mom saying, “You’re going to be a bad kid, you’re going to hell,” that was, for me, the part that made me want to cut it, and also made it a great song, the pain of that. “I’m going straight to hell, just like my mama said.” That’s pretty messed up.

AllMusic: Have you always been attracted to those kinds of stories?

AllMusic: Your music often gets described as amiable and easygoing. Do you listen to more rambunctious music on your own?

Rucker: I like the dirty stuff. Wheeler Walker’s one of those guys. That’s something I wouldn’t do in my career, but I love what he does. First of all, it’s good songs, and then they’re so hilarious.

AllMusic: Did you get what he was doing right away?

Rucker: I got it instantly. I was like, “I get it, and I like it.” I like music, and the first time I heard him, I really thought, “I get it.” I didn’t think he was making fun of anything, I thought he was making real country music with real blue lyrics, and I have no problem with that.

AllMusic: Since you began making country records, you didn't do anything to alter your singing voice from the Hootie days. Was that something you had to be mindful of?

Rucker: I don’t know if I was looking out for it, but I didn’t think I was reinventing the wheel or anything, I’m just a singer, and I was singing. Who I am as a person, I couldn’t go out there and try to fake it or anything. I’m one of those guys who sings what the music makes me feel, and I didn’t feel a need to change who I was.

AllMusic: In your early days, did you ever have any mishaps with that?

Rucker: There were covers that we played where I’d go, “OK, I shouldn’t sing that.” But when we started writing songs, I was always writing my own melodies and most of the lyrics, so I was just being who I am.

AllMusic: Dating back to the Hootie records, the songwriting credits were always fairly spread around, which has continued on these country albums. Did you have to learn how to be a good collaborator early on?

Rucker: That comes from being in a band for so long. When you start a band at 19 and you’ve been playing for 32 years, you’re used to collaboration. I like collaboration, I think that no matter how great a song is, you could sit down with somebody else and it’ll get better.

AllMusic: if someone brings you a song that you don't love, are you good at letting them down easy?

AllMusic: After the record is done, do you immediately pick the songs that you think will fit into the live show?

Rucker: I always think that any of the 12 or 13 could work. I have a few rules, and one of my main rules when making a record is I’ll never put a song on a record that I don’t want to play for the rest of my life, because you never know what’s going to happen, what’s going to explode and be a big hit, so you want to be able to be 60 and still play this stuff.

AllMusic: Obviously you have some experience with that.

AllMusic: You performed with Adele on CMT just before she became a superstar. There aren't many people who can understand what selling tens of millions of albums is like, but you're one of them.

Rucker: I love her, I think she’s one of the most incredible singers I’ve heard. I wouldn’t say it about a lot of people, but she’s up there for me with Luther and Whitney and those people who I think are the greatest singers ever. I think she’s absolutely incredible.

AllMusic: She gives the sense that she'd be fun to hang out with, like she might punch your arm and tell a dirty joke.

AllMusic: If someone comes up to you and knows all of the words to the Burger King commercial you did, do you pity them or applaud them?

Rucker: I laugh, I’m cool with it. I don’t even remember the words to that song, so if they do, I definitely have to give them a salute and laugh about it. If there’s one thing I can do, it’s laugh at myself. I never wanted to be a guy who takes himself too seriously, so I can laugh about it.

AllMusic: Is there a specific album session you wish you could have witnessed?

I’d love to have been there when they decided that on the second half, they were going to take those snippets of songs and put them all together. I always listen to those songs and think to myself, “OK, ‘She Came in Through the Bathroom Window,’ they could have written a whole three-and-a-half minute song for this, it’s such a great melody, but it’s just a two-minute thing and they go right into something else.” It’s just genius. It’s my favorite record of all time, so that one for sure.

AllMusic: You've probably been to the studio at this point.

Rucker: Oh yeah, I’ve gotten to record in Abbey Road studios, and I made sure that I walked on the crosswalk. It’s freakin’ Abbey Road, man.

AllMusic: I hear it's kind of dangerous to try to pose on the crosswalk.

Rucker: It was. Now it’s not, they have a light there so people can do it, but it was dangerous years ago.

Candlebox Frontman Kevin Martin on Keeping the Band Afloat in 2016

Candlebox Frontman Kevin Martin on Keeping the Band Afloat in 2016