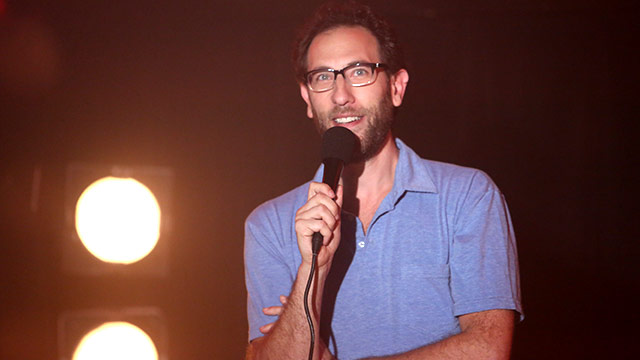 The young 2015 has already been a big year for comedian Ari Shaffir. His web series, This is Not Happening, in which comedians abandon their usual material to tell lengthy stories that follow the episode's theme, was turned into a Comedy Central show, his podcast, Ari Shaffir's Skeptic Tank, broke 200 episodes, and his Passive Aggressive special has its Comedy Central debut tonight at midnight. Shaffir isn't shy about his affinity for herbal and chemical alterations to his consciousness, so we asked him to come up with a few of his favorite songs that he likes to put on when things start to turn sideways.

Ari Shaffir: I was never really into them, I became aware of Ozzy by people saying that he was devil music, and I said, “What does that mean?” and they’d say, “He bites the heads off chickens and cats.” So once I was on acid at a UFC fight at the MGM Grand in Las Vegas and someone came out with it as their entrance music, and I was like, “Whoa, what is this?” It changed my life, I was like, “Man, this is amazing.” The drums are so good on it, they’re awesome.

Robin the Frog — "Halfway Down the Stairs"

Shaffir: I don’t know why I started listening to that song, but there are some songs that you just hear, the poem itself and the way Robin does it, how he doesn't fit in, it’s one of the first songs about depression, it covers everything, not fitting in, what that’s like. No one else had sung it as a song, they just did it for the Muppet Show. The music, the whole thing, it’s so simple, it’s nice, it’s a pretty song.

Shaffir: I love it lyrically, calling out hip hop, calling out his art form, “You all suck!” It’s art becoming about art itself. Once Andy Warhol came around, a lot of people were doing paintings about falling in love or religion or whatever, then it was paintings about other art, and that’s what this was, too. You make a sweet hip-hop song about calling out hip-hop, all of it. He’s not just calling out one person, “What are we doing, why are we rapping about this garbage,” and I agree with him. It’s like, why don’t I hear more songs about Ferguson?

Shaffir: When that comes on the car, I’m like, “Fuck yeah!” The piano, then it gets heavy, I’m like, “Ah, yes.” A few songs like that, that kick into overdrive, like “La Grange” from ZZ Top, I’d listen to that in high school when I’d go down this windy road, a shortcut road, it was real windy, one lane, and when it was icy you could skid off into the woods, but when it wasn't icy I’d kick it into third right when that heavy part of “La Grange” hits, I love it when songs do that, then they just go.

I saw Andrew WK once at the House of Blues on Sunset. Every 30-year-old white guy, even if you’re not into metal, was just like, “This is cool, it’s so cool.” It was years since we’d been in a mosh pit, but it was like, “Fuck yeah, man, get in there,” slam dance a little bit. We took three steps into the pit and we stopped, without looking at each other, and took off our glasses and put them in our pockets and kept going. We looked like a couple of nerds.

The Flaming Lips — "Do You Realize??"

Shaffir: That song’s great, their concerts are killer. They’re amazing. The first time I saw them I was high, the second time I was on mushrooms. They did all the confetti and balloons. The first time they did the entire Soft Bulletin album, and then they closed with “Do You Realize??,” and the second time I saw them they played it again, and I was like, “I forgot how great this song is,” it makes me cry.

'Passive Aggressive' debuts tonight at midnight on Comedy Central. For more on Ari Shaffir, head to his site.