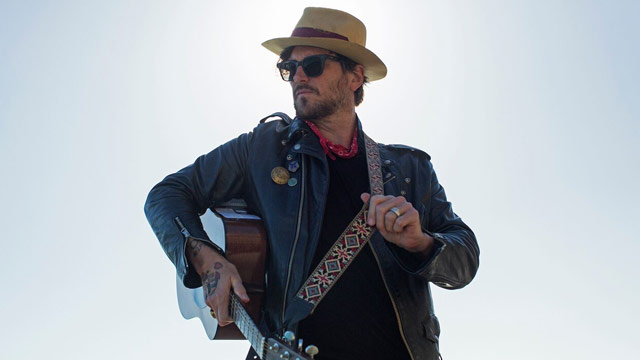 After disbanding his alt-pop band Marvelous 3 in 2001, Butch Walker carried on as a solo artist, but also delved into the songwriting and production world, working on massive songs and albums by Katy Perry, Avril Lavigne, Pink, Taylor Swift, and Fall Out Boy, just to name a few. So when he gets time away from that world to work on his own records, he has to focus and make it count, since there's probably another rapidly approaching session on the books.

Last week, he put out his eighth solo record, Stay Gold, which shows off Walker's continued commitment to songcrafting, with album closer "Record Store" taking listeners to a completely different place than where the opening title track kicked things off nine songs earlier. We talked to Walker about how protective he is of the songs that he keeps for himself, his biggest musical regret and an unfortunate elevator encounter with Elvis Costello.

AllMusic: In addition to making your own records, you spend a lot of time working with other musicians. Are you extra protective of the time that you allot for yourself to do your own thing?

Butch Walker: I have to be, because otherwise I will just be doing things for everyone else and get distracted with all these other things. I tend to wall myself off, and I’ll go away a lot of times, leave everything, leave the producing jobs, and go hole up and write, get out of town. When a wave’s coming, I want to jump on it. It doesn’t always happen, so when I feel that wave, you have to really exercise it when it does come.

AllMusic: Do you also guard your ideas that you have for your own music, or will you share them if they fit another project you're working on?

Walker: I’m protective a little bit, but a lot of it, I think I know right away if it’s something for someone else, because a lot of the stuff I write is from personal experience and memories, and that won’t apply to someone else who’s looking for an accessible pop song or something that reaches that level of listeners. On the new record, the only instance of that is when Ashley Monroe and I wrote a song called “Descending,” and we didn’t know who should cut it, her or me or somebody else. We eventually agreed that we both wanted to cut it.

AllMusic: You've moved around a bit, do you think the changes in geography have impacted the way the music has come out?

Walker: I think so. I don’t know if it reflects in the songs, where I’m coming from, but I do know that a new environment can give you more creative spark. Sometimes I just do it in the middle of the night, I’ll wake up at three in the morning with a song in my head, and that’s how I wrote a lot of this last record, was sleepless nights, waking up and writing shit down before I forgot.

AllMusic: Are you ever doing something extremely mundane when musical ideas happen?

Walker: When I’m working on somebody else’s stuff, I’ll have an idea come to me, completely unrelated, I’m not jocking their shit, I’ll just switch gears for a second and go write stuff down or hum in to my phone to get the idea down, and a lot of times that will happen when I’m working on somebody else’s music, chalk it up to a mild case of ADD, probably. I do it when I’m on my motorcycle, when I’m riding, I’m writing. I’m not listening to music, there’s no distractions, and that’s where something can come easily, but it’s not easy to write it down or hum it when you’re on two wheels, so you have to do a lot of pulling over.

AllMusic: When you put the saxophones on "Mexican Coke," what told you that they were enough? What lets you know that you don't need to also add a horn section and a choir?

Walker: I used to definitely not know when enough was enough, it’s like when you have the ability to do a bunch of stuff in the studio by yourself, you’ll end up doing it all, and it is hard to govern yourself, and that’s why I like to have other people helping me, but I’ve also learned how to control myself a bit more. When it comes to the saxophone, that’s a different story, because most people don’t even bother using it. But that song just screamed of that old Van Morrison sound, and for lack of being trendy or fashionable, I thought it would be cool to put sax on and not worry about what people think.

AllMusic: The album ends in a very different place from where it began. How important is sequencing to you at this point?

Walker: I’m very old school, I’m still into listening to records as two sides. I think a lot about how it’s bookended, and with “Record Store” being the last song on the record, I wrote that song on the last day of recording the record, because I said to myself, “I don’t have the last track.” I think that was one of the times I woke up at four in the morning and wrote that song from beginning to end. It talks about a dying era, a dying format, and that was my childhood, was record stores, so to me, it made perfect sense to put it last.

AllMusic: Have you ever had a particularly noteworthy encounter with one of your musical heroes?

Walker: I’ve had experiences like where I got into an elevator with Elvis Costello one time, and I have his face tattooed in line art on my wrist, from a long time ago, when he helped me out of a dark period, so I got his mug with the glasses on my wrist. I’ve had that with me for 20 years, and you’re not the same person you were 20 years ago, but I got in an elevator in a hotel and I was definitely tipsy. It was about midnight, and he gets on the elevator, it’s just me and him, and I’m freaking out, pointing at my tattoo going, “Oh my god, oh my god,” and he’s looking at it and went, “Oh wow, that’s nice,” pushing the button and trying to get off the elevator. So I kind of blew that chance to sit and have a real conversation over drinks or dinner with one of my heroes, because I probably looked like I was going to wear his skin. That’s my lesson I try to tell people, don’t get a tattoo of someone’s likeness unless they’re dead, because you might run into them.

AllMusic: Is there a style of music that you love but know you'll never be able to perform it?

Walker: Rock and roll and pop and hip-hop all borrows from each other, so I don’t feel like it would be so foreign for me to try to write a country song or a hard rock song, because I’ve been listening to most of that growing up. I love listening to a lot of old jazz music, I don’t really sit around listening to pop radio, I’m mostly blown away by old jazz, I listen to it all the time, but I’ll never be able to do it. That’s my biggest regret, that I never got good at a lot of those instruments that they use, those time signatures that they use, it’s the most insane musicianship. I’ve gotten a lot more into that in my older years, the quality of the musicianship, more so than just making noise or whatever.

Butch Walker is on the road in America through September

Aaron Freeman (aka Gene Ween) on Going Solo, Sobriety, and His New Album

Aaron Freeman (aka Gene Ween) on Going Solo, Sobriety, and His New Album