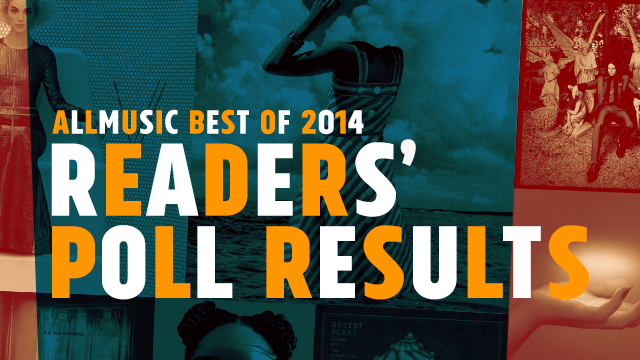 To close the book on 2014, it's time to present the results of our readers' poll. We asked our users to rate their favorite albums throughout the year, then compiled a ballot of the top choices and let our readers do the rest. To make sure your favorite albums of 2015 make the ballot come next December, sign up with AllMusic and rate albums throughout the year. And now, on to the best albums of 2014, as voted by AllMusic readers.

"If the first album was the supernova, Run the Jewels 2 is the Run the Jewels universe forming, proving that Killer Mike and El-P's one-off can be a going, and ever growing, concern." — David Jeffries

"FKA Twigs' music was already so fully realized that LP 1 can't really be called Barnett coming into her own; rather, her music has been tended to since the 'Water Me' days, and now it's flourishing." — Heather Phares

"Pick any song [...] and it'll be the kind of song that will stop people in their tracks in a crowded bar, the kind that you play over and over when you run across it streaming on a website, the kind that you tell all your friends about. A whole album of songs like that feels like a dream come true. It's real, though, and the vocals, the songs, the music, and the production work together to make Singles a one-of-a-kind experience that's nearly perfect." — Tim Sendra

"The world of the Swans is a place where joy doesn't visit very often, but it's not as monochromatic as one might imagine, and the craft and vision behind this music is often stunning; Michael Gira is a man unafraid to follow his muse wherever it may take him, and To Be Kind is another example of his singular vision writ large without compromise." — Mark Deming

"It's possible to hear the weight of his years on lullaby and... The Ceaseless Roar—it is, in the best sense, mature music, dense in its rhythms and allusions, subtle in its melodies—but he never feels weary, nor does he traffic in false nostalgia. He's building upon the past, both his own and the larger traditions of his homeland, both spiritual and actual, and that gives lullaby and... The Ceaseless Roar a bewitching depth. It's an album to get lost in." — Stephen Thomas Erlewine

"After spending the 2000s churning out consistently good albums, Spoon were due for a break...They Want My Soul is more of a welcome return than a comeback, and too complex to be considered back-to-basics—especially when they reinvent the basics on each album." — Heather Phares

"...on Lazaretto there are songs as exquisitely sculpted as those on Blunderbuss [...] but what makes it a better, richer work is how it simultaneously holds every side of White, existing at the crossroads where modernity, tradition, hard work, and inspiration all meet." — Stephen Thomas Erlewine

"While St. Vincent is some of her most pop-oriented work, it doesn't dilute the essence of her music. If anything, her razor-sharp wit is even more potent when polished in a candy coating with just a hint of venom." — Heather Phares

"Morning Phase develops its own distinct gait, one that's a little more relaxed than [Sea Change]. Crucially, Beck has swapped sorrow for mere melancholy, a shift in attitude that makes this 2014 album sweeter than its predecessor, a distinction sometimes distinguished by moments where words, traditionally the sadness signifiers for sensitive troubadours, are washed away by cascading waves of candy-colored sound." — Stephen Thomas Erlewine

"The songs are expansive, regardless of their tone, with the ten tunes sprawling out into almost an hourlong running time, leaving no stone unturned in their nuanced production and deceptively simple presentation. In this way, Lost in the Dream is the War on Drugs' Daydream Nation or Disintegration; lengthy distillations of similar themes result in wildly different threads of song, all connecting again in the end. It's a near flawless collection of dreamy vibes, shifting moods, and movement, and stands easily as [Adam] Granduciel's finest hour so far." — Fred Thomas