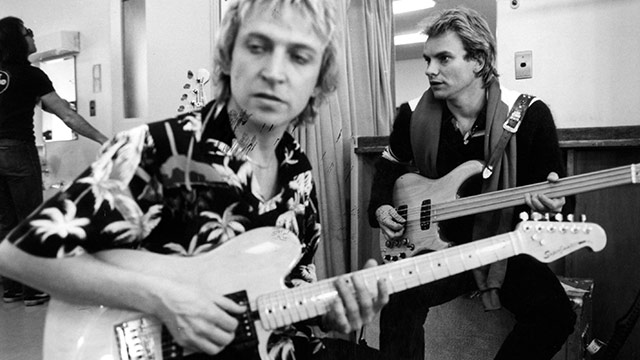 When Police guitarist Andy Summers released his memoir, One Train Later, in 2006, it came just before the band's reunion and subsequent world tour, so it's a document definitely deserving of an update. The turbulent relationship between the band's members made for enticing drama, and having eyes and ears on the inside would be a rock and roll voyeur's dream come true. Fortunately, Summers has put together a new documentary based on his memoir, featuring behind the scenes footage and insight from the band's 2007 reunion, including scenes of stressful rehearsals, unexpected key changes at soundchecks, and new hindsight from Summers on the band's musical output. There's also a wealth of fascinating information about Summers' pre-Police days, including his time as guitarist for the Animals and his involvement in the early days of psychedelic rock.

In our exclusive clip from Can't Stand Losing You: Surviving the Police, Summers gives insight into the tumultuous recording of Ghost in the Machine, which coincided with both the dissolution of his marriage and the cracks that were gradually forming in the band. The documentary is already playing in New York, and expands to Los Angeles, San Francisco, Denver, Chicago, Seattle and Boston in the coming weeks. And keep an eye out for our interview with Summers, coming this Friday.

For more about Can't Stand Losing You: Surviving the Police, including when it's playing at a theater near you, visit the film's website.