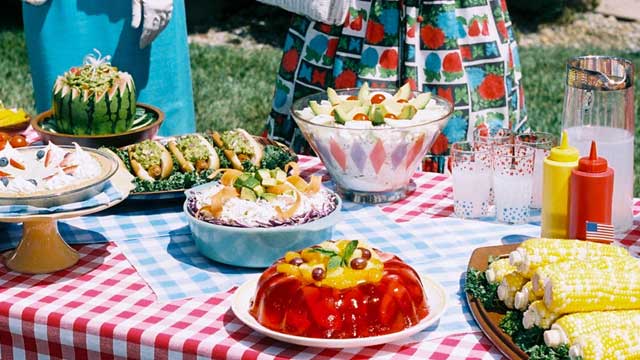 Temperatures are rising, the sun is shining, and sweat is trickling -- it's summer! Whether your idea of the perfect summer involves spending lazy days at the beach, hitting the road with friends, or escaping to a cooler climate, our editors share this set of bright, breezy sounds to keep you in tip-top summer spirits.

Get the editors' picks in blurb and video form below and subscribe to the playlist on Spotify - and keep the music playing by sharing your favorite summery songs (more on that at the end of this post).

The Beach Boys - “The Warmth of the Sun”
The Beach Boys have always been the perfect summer band, and the group’s bright, warm sound and gorgeous harmonies practically create sunshine. “The Warmth of the Summer” is special, though, even among the band’s many summery sides. The song, written by Brian Wilson and Mike Love, was begun early in the morning on November 22, 1963, the day of President John F. Kennedy’s death, and finished that night, with the day’s tragic event giving the song’s beautiful melody and hopeful sentiments an added poignancy. It remains one of the best and most moving of the Beach Boys’ ballads. - Steve Leggett
https://www.youtube.com/watch?v=S1pYuAl7su8

5th Dimension - "Stoned Soul Picnic"
The soulful Cali hippies lay down the beach blankets, pull out their picnic baskets, and cure their munchies with some delicious "red-yellow honey, sassafras, and moonshine." Since hearing the song at a porch party last summer, fellow pop editor Greg Heaney and I have been talking about starting a DJ duo called Sassafras and Moonshine. Lots of potential there, but unfortunately, we can't decide who gets to be Sassafras. - Jason Lymangrover
https://www.youtube.com/watch?v=dUyTKl815MU

Lonnie Liston Smith - “Summer Nights”
From his 1975 album, Visions of New World, this slow-burning jam is exactly what it says it is, encapsulating the humid, woozy feeling of a tropical night with wandering electric piano and simmering funk rhythms. Soft vocals are tucked behind layers of sticky percussion, buzzing synth and incredibly laid-back piano twinkling from Smith, concocting the same pleasant haze as a half-drunk midnight walk down a moonlit beach. - Fred Thomas
https://www.youtube.com/watch?v=u_M9NvaNxoI

Wild Light - “California on My Mind”
Nothing summons the sights, smells, and sounds of summer better than a good old fashioned, expletive-laden, Bay Area beatdown, and while the rousing opening cut on Wild Light's 2009 debut delivers California a severe upper cut, it's done in the name of heartache, not state hate. For extra points, sing along by replacing Oakland and San Francisco with the name of the town where you let the love of your life slip away. - James Monger
https://vimeo.com/4066207

Lemon Jelly - “Nice Weather for Ducks”
Built around a sample of the impossibly chaste voice of concert baritone John Langstaff singing "All the ducks are swimming in the water/ fal de ral de ral do" from his 1996 album, Songs for Singing Children, the fifth track from Lemon Jelly's kaleidoscopic Lost Horizons is so relentlessly effervescent, affable, and addictive, and so utterly bereft of the weight of the world, that it makes my white hot hatred of summer nearly tolerable, if only for five short minutes. - JM
https://vimeo.com/19027747

Neon Indian - "Deadbeat Summer"
For a hot, lazy, lounge-worthy day on your summer vacation, the music on Neon Indian's first album might be the perfect glass of lemonade. Taking the aesthetic of a roasted VCR tape recording of an '80s cable access show, with its summertime slacker vibe, washy synths and airy vocals, as far as chillwave goes, this is one of the genre's defining songs. - JL
https://www.youtube.com/watch?v=qlJ27Dcv4fc

Mint Royale - “Don’t Falter”
Summer lovin’ tune from ex-Kenickie singer Lauren Laverne and the lads in Mint Royale that works as a summer jam and also as an incredibly sweet love song with a big, booming beat. Laverne could melt ice when she sings the line “when you’re with me it’s always summer.” Yeah, assuming it’s not the summer of humidity, bugs and sweat trickling down your back if you do something rash like standing outside for two seconds, and more the summer of cool nighttime breezes, almost frozen lemonade and getting out of work early to ride bikes until the fireflies come out, then I’m in. The album the song comes from, 1999’s On the Ropes, is full of block rockin’ summertime jammers. Look for it in thrift stores and at swap meets. - Tim Sendra
https://www.youtube.com/watch?v=tX1DWlKmMoE

Nalin & Kane – "Beachball"
There's the sound of crashing of waves, along with a simple, spoken "Let's go to the beach" during the intro, but otherwise, the great "Beachball" somehow evokes the carefree days of summer with a nothing but a bleepy-boopy, proto-Avicii, super-simple sequencer line. Anyone who's been to a pool party worth its salt and lime has danced to this club standard from German trance duo Nalin & Kane, be it in its original form or one of the bazillion remixes – bootleg and official – that followed. - David Jeffries
https://www.youtube.com/watch?v=18JBs4BFnt0

The Cool Kids – "Summer Jam"
Just like De La Soul were the summer group to turn to during the Daisy Age, the laid-back and easy sound of the Cool Kids is breezy enough for the pool and/or patio. This one even says "Summer Jam" right on it, and with some buttery Neptunes production plus lyrics about "Barbecuing barracuda at resorts in Bermuda", pick this one and "reconcile with your freaky side" while wearing flip-flops. - DJ
https://www.youtube.com/watch?v=Vmyluh0Qc20

The Beach Boys - “All Summer Long”
A few years before they’d mature into Pet Sounds, the Beach Boys were still surfin’, racing hot rods, obsessing about summertime crushes and churning out fresh-faced records like 1964’s All Summer Long at an alarming rate. While much of the album is the standard kind of wholesome teenage fare that the boys made so popular in their early days, there’s something in the expanded instrumentation (marimba throughout, and a flute/brass breakdown) and slightly melancholic strains of the title track that hinted at the musical turns Brian Wilson would soon be taking. Housed in a picture-perfect flip through the scrapbook of two young lovers’ summer memories, “All Summer Long” is a straightforward anthem of summer happiness, but one that manages to silently acknowledge the fact that even the perfect summer has to come to an end. - FT
https://www.youtube.com/watch?v=2asuia81sRM

Listen to our editors' picks in playlist form, and keep the music playing by sharing your favorite summery songs. Spotify users can contribute by adding AllMusic Editors to your people list, and then sending your selections to our inbox. Not a Spotify user? Share your track picks on the AllMusic Facebook page or by tweeting @AllMusic with hashtag #allmusicsummer.