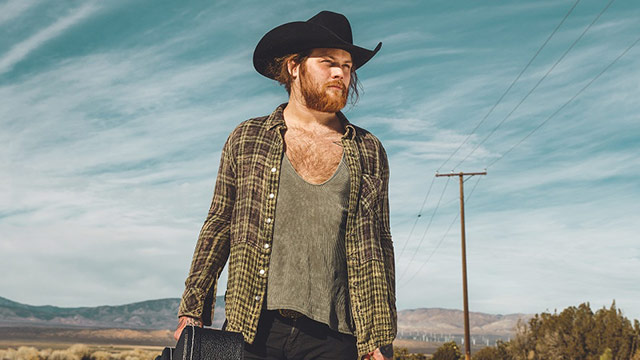 After years of work and teasing its existence, ​Asking Alexandria frontman Danny Worsnop delivers his long-gestating debut solo album this Friday. The Long Road Home transposes his trademark raspy vocals into the worlds of country and rootsy rock music for songs about the bottle, songs about pain, and songs about songs.

Although the album is finally coming out, Worsnop's work is just beginning, as he plans to spend 2017 doing extensive touring on the record, as well as producing videos for each of the album's tracks. Stream the record below, and read on for Worsnop's thoughts on the album's lengthy creation stage, how his voice fits into this different musical realm, and why these songs were never meant to be shared.

The Long Road Home can be ordered via Earache Records.

AllMusic: The album's been in the works for years now, so it must be a relief to finally be putting it out.

Danny Worsnop: It’s very relieving, it’s an incredible feeling to finally have something that I’ve put so much time, soul – and a lot of money, too – into completing, and it’s finally done, it’s finally coming out to the world, when at times I wasn’t sure if it was going to come out, and now it finally has. Although there’s a few days for everything to go wrong still.

AllMusic: How did you know when it was done?

Worsnop: I had to physically stop myself from writing songs, or I’d never get finished. That was a big part of the delay, I kept writing, I kept coming up with new stuff, and it was stuff that I couldn’t not put on the record, so I reached a point where I had to just stop doing it.

AllMusic: How recently did you put the finishing touches on it?

Worsnop: It was a few months ago, I had just got out of a session with my producer, and I got home and some friends were like, “We have some cool ideas, and I know you still have some you haven’t finished, so do you want to get together and finish them?” and I said, “No, I’m making no more songs until this comes out.”

AllMusic: From the start, did you know you'd be making a record from these songs, or did they just start adding up over time?

AllMusic: When stepping into another musical area, I imagine you have to be mindful that you're doing more than just an imitation.

Worsnop: That never crosses my mind, ever. I’ve always been a musician and writer who sits down and lets whatever’s inside me out. At the same time, before I sit down to write, I usually stop listening to music for about a month beforehand so as to not soak in other people’s sounds, so when I sit down to write, I’m completely fresh and it’s whatever’s in me, and I’m not subconsciously channeling something else.

AllMusic: Did the years of screaming help you add some of the growl that's in the vocals on this record?

Worsnop: That’s just something my voice has, that sort of dirt and gravel in there. On this album, I got to use it as an emphasis point and create those peaks and valleys with the melodies, so it’s an accent piece.

AllMusic: Have you started writing again or are you still taking a break?

Worsnop: I’ve already started writing for the second one. I’m constantly learning, and I feel like that’s as it should be; you’ll never know everything, there’s always something more to learn musically. I try to learn from the people I write and play with, and I hope that with every single album I make, it’s something to try and beat next time.

AllMusic: Are you glad you made the record at this point as opposed to five years ago?

Worsnop: Yeah, definitely. I’ve grown so much as a songwriter over the last few years that if I’d made it back then, it wouldn’t be close to what it is now.