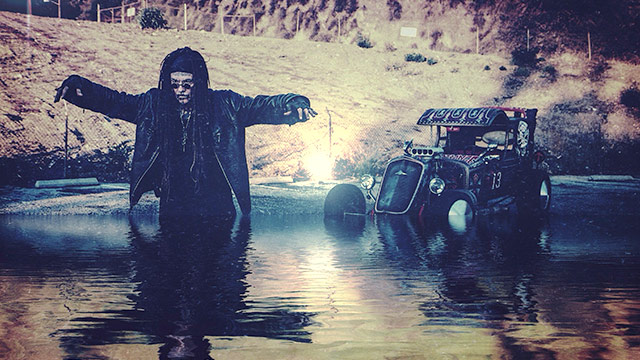 ​Fueled by the memory of his late guitarist and friend Mike Scaccia, as well as the power of his new medical marijuana card, Ministry frontman Al Jourgensen tapped into his zanier side for Surgical Meth Machine, a new project dripping with sarcasm, pummeling grooves and even some hints at his band's early synth-pop days. So if you lost track of Ministry during the band's temporary retirement or during their lengthy anti-George W. Bush phase, this might be the time to check back in and be pleasantly surprised.

We called up Uncle Al to make sure he's still OK, which is always a good idea, and then we talked about the genesis of Surgical Meth Machine, why he despises social media, why Devo is the best, and how a kid from Cuba ended up becoming a huge hockey fan.

AllMusic: Surgical Meth Machine sounds like it was probably a lot of fun to make. How important is the fun aspect to you at this point in your career?

Al Jourgensen: It’s the most important thing. The whole premise of this album and this band and everything about it started with some ideas towards the end of recording the basic tracks of From Beer to Eternity, the last Ministry record. Me and the late, great Mike Scaccia, my little brother, my best friend, who died right after finishing the basic tracks, it was me, him and my engineer, Sammy [D'Ambruoso] in the studio. When I record a record, I just bulk-record a lot of ideas, I get a lot of ideas down on tape, and at the end of the day we check out what we’ve got, and the ones that wound up on From Beer to Eternity seemed to go with each other, so we kept those, but we had all these other really fast, brutal ideas that didn’t seem to fit on that album, but we kept them for a later date.

Then Mikey died, and so what we did was after we got done finishing From Beer to Eternity, I had to mix it after he died, and then we had all these ideas on the shelf that me and Sammy went back and recorded, things that were in that spirit, just balls to the wall, fast as shit stuff. We were having a lot of fun doing it, we wanted to do it in the spirit of Mikey. In the middle of that record I wound up moving from Texas to California, and when we moved to California, within a couple of weeks I went out and got my medical marijuana card, and so you can pretty much see the album completely change as soon as I got my weed card out here. It turned from a really fast, brutal assault into, “Whoa, the sky is so beautiful today.”

AllMusic: So that's the second half of the record.

Jourgensen: Yeah, exactly. This record is fun to me, because it’s a real good chronology of the way the record was made. It’s in chronological order of when they were recorded, so it starts getting more hippie. We changed from smoking crystal meth into doing MDA halfway through the record – not literally, but in abstract terms.

This record is really fun for me, man, just like the opening song, it’s a piss-take on social media and Facebook shit, “I’m so sensitive, you’re unfriended,” this and that, it’s just making fun of a lot of different shit, which is not only my personality but also Mikey’s and Sammy’s. If you look at SMM as the Muppets, me and Sammy, pretend we’re the two old grumpy guys in the balcony at the theater, that’s what this record is.

Jourgensen: I just watched my 30-year-old daughter, who’s grown up on this shit, it’s such a part of her day to day life, and I’ve met her friends, and it’s such a part of their life, and it’s so not a part of my life, I’m so out of the loop on this shit. It just amazes me, they sit there and fret over their likes, it would be like me actually reading reviews I get or reading the interviews I just gave, I don’t do that shit. I’ll do it because I have to, I understand my promosexual duties as a member of the artistic community, you have to self-promote, but it’s not something I pore over and critique the critique, if you will. It’s mind-boggling to me, it’s just not in my DNA. I found it funny, counting how many likes you have, “My likes went down this week!” “Yeah, so what, you’re probably doing something right.”

AllMusic: How much of the record is you playing a character versus being yourself?

Jourgensen: It’s 100 percent me, because the character would be me, too, it’s just something I write into a character voice, but it’s also Sammy’s take on that, he does a lot of vocals on this record, a lot of the rants and raves, like on “Rich People Problems” and “Tragic Alert,” those rants aren’t samples, that’s Sammy, and some of the character voices are mine, but I’ve been doing that for years all throughout Ministry and RevCo, we have a lot of character voices. It hits the point home without having to go and borrow someone’s sample, but it’s of the same mental makeup, we’d just rather do it ourselves.

AllMusic: On "Unlistenable" you name-check a bunch of bands and then dismiss them in a tongue-and-cheek way. Are you ready for people to misunderstand that song as you actually calling them out?

Jourgensen: The response I’ve gotten to that, just with friends going, “Do you really want to do that? You’re going to piss some bands off.” I’m like, “That’s not the point, I even slag Ministry off on that.” The point is that, once again, social media, with all these people under the cloak of anonymity, that creates braveness, and surliness and belligerence, because they don’t have to answer for it. When you ask about anything, “What do you think about Ministry?” “Ahh, they suck! Fuck Ministry, fuck Iron Maiden, fuck Megadeth, fuck Lamb of God!” It’s all these little kids in their mom’s basement suddenly becoming music critics, and that’s what it’s about.

It reminds me of in 1988 when we released Land of Rape and Honey, that song starts out with sieg heils, and it’s a complete anti-Nazi song, yet for that tour, we had nothing but fucking Nazi skinheads up front seig hieling me and getting pissed when I wouldn’t do it back and called them a bunch of cunts. Sometimes you have to do that, it’s called parody. In the immortal words of Robert Plant, “Does anybody remember laughter?” “Unlistenable” is a piss-take, it’s a parody, it’s irony, it’s sarcasm, it’s not to be taken like, “Oh, Ministry and Lamb of God are at war!” Fuck that.

AllMusic: The punchline of the song is that the only band you like is Devo, and then you go straight into a Devo cover. What's your favorite Devo album?

Jourgensen: Every single Devo album. I hate to sound like Sarah Palin and her journalistic review, but there’s not anything that they can do that’s bad, because I understand their agenda or their intent on making a song. I may not like a particular song, they may have some songs that are more favorites than others, but the whole shtick of what they do, I just found it genius back then, and to this day, it still holds the test of time. Usually, what I think of as gimmick bands will fall to the wayside many years later, it was a gimmick for that time period, like those rapper kids with the backwards clothes, that’s a gimmick band. That wouldn’t work today.

But Devo still stands the test of time, they’re very anthemic in everything that they do, and they’re very true to their beliefs, the whole de-evolution of man and all that shit. You have to remember, that came out in 1979, 99 percent of people who have heard of Devo at this point, in all of our careers, weren’t alive when Devo started doing this stuff. So I find it even more amusing to that extent, which is why I decided to cover a timeless classic and make it as anthemic as I possibly could for “Gates of Steel.”

AllMusic: How early on did you get into them?

Jourgensen: In 1980, I went to the Art Institute in Chicago as kind of an internship and helped found their sound department, and the person that was the professor and was basically my overlord was Devo’s first manager. They were very influential in my career as far as my musical taste and how it translated to how I do things. I’d have to say my three biggest influences, Devo is right in there along with the Ramones and Buck Owens.

AllMusic: Will Surgical Meth Machine be doing any shows?

Jourgensen: We’ll see, I don’t want to tour with just one album under our belts, so there won’t be a tour for this album, but if we can get the schedules correct and if everyone has time in between other projects, we could do a second album and at that point we’d talk about doing a live show for it.

AllMusic: It's time for the NHL playoffs. How did you end up selecting hockey as your sport of choice?

Jourgensen: When I was six years old, it was the cheapest ticket in town, and my stepdad, who had just adopted me, wanted me to go see sporting events and all that, so he bought season tickets to the Chicago Blackhawks in probably 1965 or ’66, and I just started going to the games regularly with my dad and got the hockey bug. I grew up with all the greats during that era, all the people that are hanging on the rafters of the United Center right now: Bobby Hull, Stan Mikita, Tony Esposito, Glenn Hall, you name it, all the greats. It just never left me.

Then by fate and circumstances, I got to be friends with the Wirtz family, which owns the Blackhawks, and has since the late 1930s. We exchange cards and gifts on Christmas, and I’ve gotten to meet a lot of the players over the years, so I’m basically hooked. Danny Wirtz, who’s the son of the owner, he’s probably next to take over after his dad retires, and at that point I’d love to leave music and become the general manager of the Chicago Blackhawks.

'Surgical Meth Machine' is out now on Nuclear Blast Records