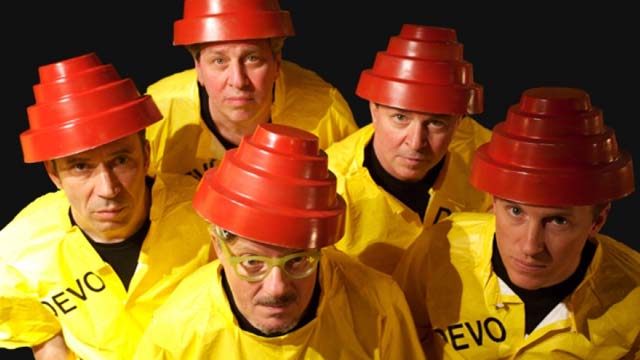 Devo has announced that rhythm guitarist and founding member Bob "Bob 2" Casale passed away yesterday from heart failure. He was 61.

Casale, along with his brother Gerald, was with the pioneering new wave band since its inception in 1973. Although the synthesizer is the first instrument that comes to mind when discussing Devo, Casale's guitar work could add a propulsive, kinetic energy, particularly on Q: Are We Not Men? A: We Are Devo!, the band's 1978 Brian Eno-produced debut. His playing on tracks like "Gut Feeling (Slap Your Mammy)," "Uncontrollable Urge," "Too Much Paranoias" and "Sloppy (I Saw My Baby Gettin')" showed Casale adding a dose of punk to the proceedings. Additionally, the song "Mongoloid," which is based around a jagged Casale rhythm guitar track, has been a live staple for the band since the 70s. He eventually shifted to keyboards as Devo grew more synth-oriented, and remained in the lineup through its most recent performances and recordings.

We've collected a few of our favorite Bob Casale performances below, and feel free to bring up more in the comments.


The first live performance of "Gut Feeling (Slap Your Mammy)"


Unlike his brother, Bob Casale didn't accumulate many songwriting credits in the Devo catalog, but he did co-write "Please Baby Please" from 2010's Something For Everybody.