Like an X-ray of a dinosaur egg, this debut Weird Al Yankovic production provides a detailed glimpse of the creature to be grown. "Another One Rides the Bus" is the earliest of his arena rock parodies, recorded in 1980 during an on-air appearance on the Dr. Demento show and a classic piece of musical humor. Already he had developed his knack of knocking the wind out of any pretentious, overblown rock anthem by slightly adjusting the lyrical content. Once one of these songs was describing the boring, mundane activities of the non-rock star, it was if a new life were born within the song. "My Bologna" demonstrated the concept as applied to the fine art of making the stupid much stupider. A later album title by this artist would be Dare to Be Stupid, and if the Knack's "My Sharona" had to be sacrificed at his creative altar for this to be understood, so be it. Once parodied by Yankovic, a song can never be thought of in the same way again. "I Love Rocky Road" brilliantly trivializes both rock & roll and the idea of singing about loving it. If one is going to sing about loving something, let's make it be something important -- like a horrible ice cream flavor. Unfortunately, the album doesn't really get off on the right foot with "Ricky." Yankovic hadn't quite fine-tuned his skills of parody to the point where he could pull off connecting the new wave Toni Basil number with Lucille Ball's situation comedy, and the results are contrived and not particularly funny. This is also the best way to describe his original material, which was used in a smaller proportion in all his later albums than it is here. His original songs may not seem like they were written in ten minutes, but the ideas behind them don't seem to involve that much contemplation. As a result, they are like little bits of puff, produced so expertly they seem like some kind of ultimate filler, except that their impact on the flow of an album side is more like ballast. The defense that Yankovic's material is best understood by his main target audience, 11-year-old kids, washes no better than they do. Kids this age really don't like his original material as much as his parodies, although a few years down the road he managed to come up with at least a few of his own songs that were acceptable to what has to be the fussiest audience imaginable. Since the originals tend to dilute the excitement of any Yankovic album, the titles in his discography are rated based on how successful his originals that are featured are with 11 year olds. It goes without saying that each of his albums contains at least a few brilliant parodies, so this songcraft is where one finds varied levels of consistency in his output. At this stage, his relationship with his high-powered musical backup had yet to jell, either. Since the unaccompanied piece off the radio is the best performance in this set, one could even come to the mistaken conclusion that he works best without a band behind him. 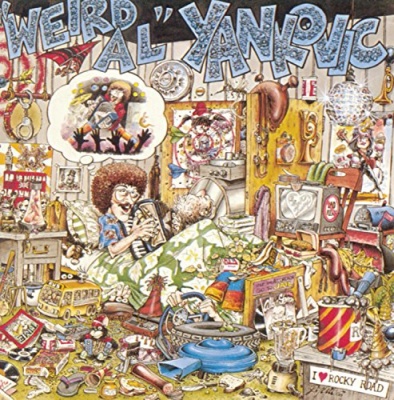