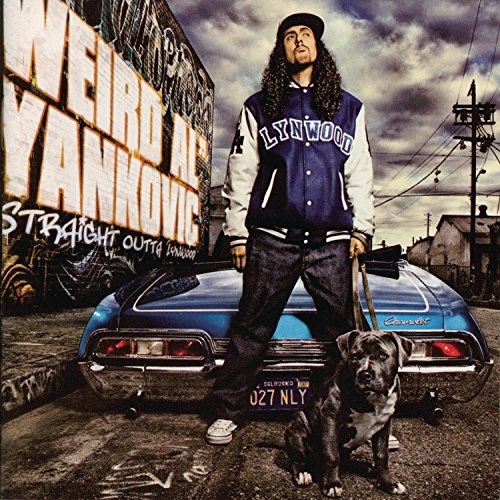 Three years between Weird Al Yankovic albums has been the norm since the '90s, but a lot happened to the parody king between 2003's Poodle Hat and his 2006 release, Straight Outta Lynwood. First off, Poodle Hat stalled after one single. Then while on tour promoting the album, Yankovic's parents were both killed in their home from carbon monoxide poisoning. Al handled the issue quickly and honestly with his fans, promising to carry on before disappearing for a couple years to cope. Then he came back with the pretty good "You're Pitiful" -- a riff on James Blunt's "You're Beautiful" -- and as the track wormed its way around the Internet, Blunt's label, Atlantic, recanted their permission for the parody after they had already granted it. The latter event is something Al's been through before and it always drums up some hype, but his quick and snide reference to Atlantic Records in the "White & Nerdy" video seemed genuinely ticked and wiped away some suspicion the whole thing was staged. "White & Nerdy" -- a suburban take on Chamillionaire's big hit "Ridin'" -- is the hilarious reason to celebrate his return, and the album it lands on is inspired. The original, non-parody material is usually where the man stumbles, but here the ridiculous "Weasel Stomping Day" and clever "Don't Download This Song" offer something that isn't filler. "White & Nerdy" -- where the terminally uncool singer boasts he's a "whiz at Minesweeper" and "fluent in JavaScript as well as Klingon" -- is up there with his best, and "Canadian Idiot" -- a hockey-loving, toque-wearing rip on Green Day's "American Idiot" -- is great, making this effort already one highlight better than Poodle Hat. The latest installment in his series of polka parody melodies -- this time it's "Polkarama!" -- is a brilliant roll through the recent hits of Modest Mouse, 50 Cent, Rihanna, and many more with a short tribute to the legendary Spike Jones stuck at the end, a thrilling moment for novelty fanatics. Topping it off is the 11-minute "Trapped in the Drive-Thru," which turns R. Kelly's epic "Trapped in the Closet" into an excruciating -- but funny -- wait for that greasy bag that will most likely contain the wrong order. This handful of prime Yankovic overshadows the only mildly humorous Usher and Taylor Hicks parodies and the couple original tunes that really drag, but Yankovic's fans don't expect perfection until the next "best-of" rolls around. Lynwood's highs are higher than usual, with Yankovic trying harder and landing more shots. Turns out novelty music's silliest hitmaker is a survivor.